Hopefully I’ll get some time on this, but a big real life problem has come up which I kind of have to endure stoicly until it is all hopefully sorted out.
At least doing something creative helps to distract me from my current worries.

Anyway, the plan is a simple roguelike/RPG with a focus on avoiding monsters and exploring. Top down view, static sprites for characters and items. I’ll do as much as I can and then maybe continue after the contest.

For a roguelike there’s lots of code laying around on the web, it just needs to be modified to fit my particular framework.

Right now Ive got camera and mouse control as well as a simple level generator. Don’t know if I’ll get anything more done but I’ll give it a try.

Coming back to this forum after many months you are still around as active as before. It’s cool to see that you’ll try to create something for this challenge even though time is very limited for you. I should maybe try to start something as well, even tho my freetime is so limited at the moment too.
Anyway, your idea definitely sounds cool and achievable, hope you get time to get at least something done. Even if it’s just cubes…

Thanks!
Hopefully I’ll get some more done this week.
Here’s a video of current progress:

Looks good so far, but maybe some narrative (if needed) would make the webcam a bit more useful!

Thanks! hahaha I actually forgot the camera was switched on. Good job I didn’t pick my nose or anything.

It was just a quick video I put together this morning before getting ready for work.

I rendered some sprites today and made a tileset. I could have just used some stock stuff from google images, but I decided to render some of my old models and get some use out of them. 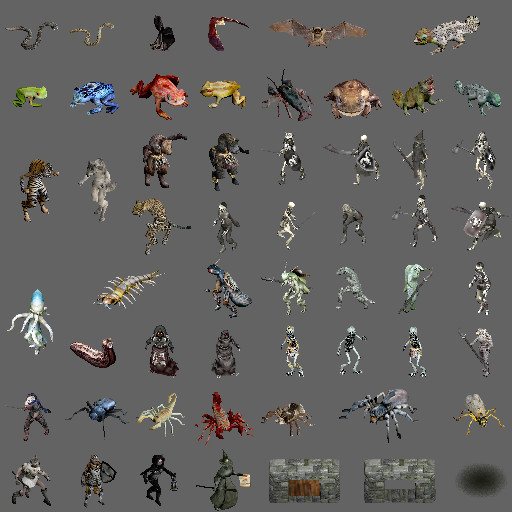 Thanks,
it’s actually just a render of a 3d tileset. Luckily the rules are pretty much the same whether you make it in 2d or 3d.

Unfortunately I won’t be able to devote any more time to the project right now. My son went in to hospital yesterday, so I’ve got to devote all my time to my family for a while. Working on Blender helps to take my mind of all the worst case scenarios I’m constantly thinking about, but it doesn’t help my wife or sons much.

Good luck everyone with the contest!

Well, my son came home today so I got a bit of time to work on it after the boys have gone to sleep.
Not enough time to finish it, but doesn’t matter. Working helps me to calm down and regain perspective a little after a bit of a roller coaster week.

here’s where I ended up: