I started to port the former BGMC entry into a mobile game.
Some insights into the current state of the project. Even if it is not a BGE project anymore, i hope someone will be interested as it started as one. And of course i still massively use Blender for the assets. 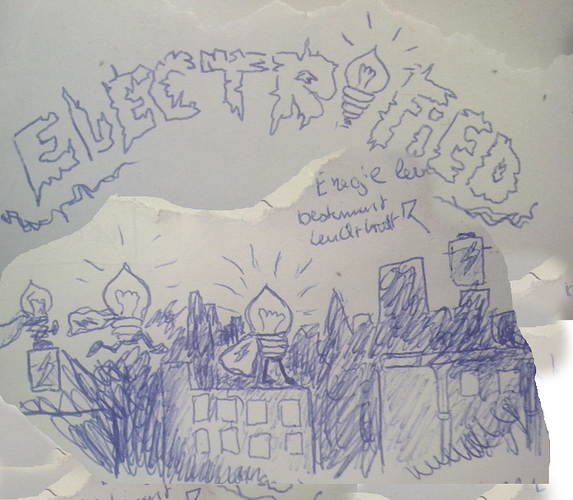 This is going to be an endless runner where the hero is an electric light bulb.

The protagonist will run over the roofs of houses in a dark sun dawn skyline setting. There will be only very view light so you nearly cant see next platform to jump on.

Most of the light will come from the bulb itself. How much the bulb will lighten the scene depends on a energy-level. This energy-level will decrease over the time until there almost no light at all.

You will have to collect power-ups which will refill your energy-level.

There will also be the possibility to do a double jump which will consume some extra energy.

Maybe the possibility to fully enlighten the current level part at the cost of extra energy.

The game will be developed so that i can maybe port it later to mobile phones. (Only simple controls for example)

Motivation:
i dont think that i will spend the full two weeks on it.(i voted for one week). So i try to keep it simple but fun.

If this is for BGMC19 please add [BGMC19] to the title. (edit post, advanced)

I’m really loving this concept, if you can pull it off it’s gonna be excellent!

You can see the energy in the left upper corner and the world is getting darker when its decreasing … you can collect the powerups to refill your energy …
Everything still in dummy state, with placeholders.

This video looks behind the scenes and shows how the world is created and removed again.

Next thing would be to find a working algorithm to fill in some variation and spawn different buildings and balance the gaps in between. I think this could be a bit tricky…

Can you explain the light character. Will he be emitting light, how do you plan to do this? Will he have a transparent glass material? Looking good so far.

Can you explain the light character. Will he be emitting light, how do you plan to do this? Will he have a transparent glass material?

No he won’t be emitting light by itself in real. I dont think that this possible with bge, except with some shaders maybe.

It is just faked by a lamp parented to the character.

Keeping in mind that i may will port this to mobile, i think i will avoid transparent materials.

I started to port the former BGMC entry into a mobile game. Look at the top. I have edited the first post, and added a video showing the progress.

I have a method for branched lightning and chain lightning in the bge,
no problem dropping the code so you can apply it elsewhere,
edit: just had an idea for your game, Lightning Grapple swing

Thanks.
I dont know if a grapple swing fits into the current gameplay, but i will think about it.
What kind of method do you mean? is it based on shaders are they very complex? Because i am limited on mobile devices.

I use bge.render.drawline and points in space,

I am not sure that it’s available on ES, but I think you could use triangles, and just have 2 points share the same location,

Ok, i may can do something with L-Systems and dynamic mesh generation to get a reasonable method for mobile. Something like it has been described here.
I think i will try to get something done when i found some time, you are right this kind of effect would suite the game well.

I use particles that are sensors in the game engine that move randomly, but are weighted to move to the closest target, and each particle stores its path as a list,

the ‘host’ particle, emits child particles that also move randomly and to the target, but the ‘child’ particles can’t emit children, and move less directly to the target then the host, when any particle makes contact, draw then paths.

so think
‘erratic homing missile that remebers crazy path it took’
emitting crazier missiles and making a list of those children particles.

this was a product of random tinkering, and probably could be much more optimized*