BGMC26 ~ Zu and the Lost Chambers

Idea: You play as a small alien named Zu and uncover the secrets of a lost, subterranean alien fortress left behind by an ancient race.

It will be a puzzle game with minimal combat. Some early ideas include: pushing blocks, avoiding traps and simple AI, solving simple to complex puzzles, uncovering ancient secrets, atmospheric alien architecture and sounds…

The story sounds a bit like Alien / Prometheus, but it’s pretty promissing, specially if the game don’t be a horror style game, but focus on exploring and puzzles (like Indiana Jones or Tomb Raider), respecting the limitations due the time. I will be participating too, good work and luck to both of us.

@joelgomex1994, thank you. I’ve never played those games or seen those movies, but I hope my idea turns out to be somewhat original. Good luck too. I’m very excited to start developing

I was also thinking in the vein of original tomb raider…but with a touch of abes odyssey.

This is Zu. I just made quick animations that are somewhat optimized. If I have time at the end I’ll go back into them to make them look nicer. I think I’m done for tonight, but tomorrow I’ll work on the level kit and then things should come together quickly.

Instead of making a full modular kit like I usually do, I just decided to build each level as I go so they’re each unique. Making the entire level into one mesh is saving me about 500kb on each level, which will add up A LOT. This is a preview of the first level. Even though it’s simple, I didn’t want to give away the full puzzle.

It sounds and looks Great a great vision keep it up heres advise work on Mechanics and systems it will get you far in the BGMC its really amazing to see What BGE is already capable of doing !!! Otherwise Goodluck and all the best can’t wait to play !!!

So is this a bit like a portal game? Those colors really pull me into an alien/tron style…electric green and purple…I kinda like it…at first I was thinking…“What the hell is he thinking???”…but after I watched the video it kind of grows on you.

And a screenshot of the minimalist main menu, using the same in-game HUD 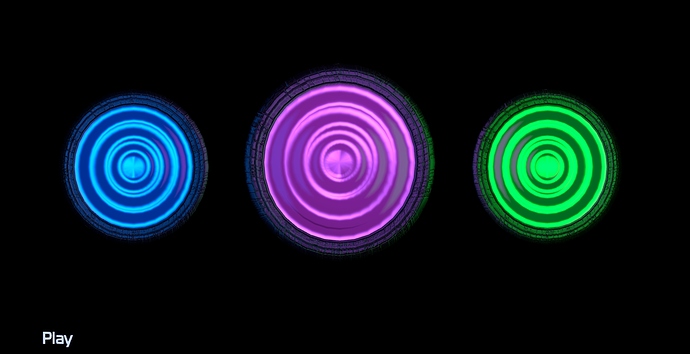 I have a lot I still want to do, but I think I might run out of time with work. The mechanics definitely need a lot of work, but because of the nature of the game I’m saving them for later. I want to make a lot of interesting chambers to solve and explore.

@JustinBarrett, Thanks. It’s basically an alien uncovering secrets about another alien race, so I wanted it to be a little strange. The portals are like doorways that take you deeper into the chambers and the sentinels (robots) are ancient tech that has been left behind.

Looks awesome!
The character animations are a little too rigid in the torso area.
The body needs movement too.
Twist the upper torso to follow the arms. Twist the lower hips in the opposote direction to follow the legs.
Give the body some up and down motion to match the walk cycle’s passing and down points.

Incridble you make all in one day! Good work!

@smoking_mirror, thanks. I agree, but I think I’m going to switch to first person. I’m trying it out and it feels a lot more immersive.

@sarushan, thank you. I had a solid plan for the first day, but now I’m starting to work slower

Might have to go back to the drawing boards for some new ideas.

Took a break to make a little show reel

I have a good system down for building levels so I think I’m going to work on the mechanics for a while and making the game more exciting.

This looks Really great! I hope you can make the mechanics interesting enough to keep players engaged. And super important, don’t forget a goal for the player, that you tell the player in the beginning of the game. It can be as simple as getting to the end of the level, but it will give purpose to the player.

Initially, I wanted to avoid combat in this game. However, I have a really cool idea I want to try out where the sentinel robots can act like zombies when they detect you. So next I’m going to model a quick weapon and give the sentinels some health. Hopefully the new mechanics don’t take too long…

New weapon model. It’s sort of like the plasma pistol mixed with the needler from Halo. 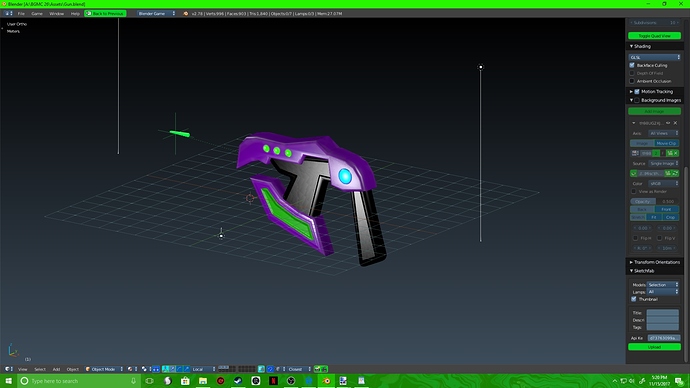 Currently at 22.8 MB, so that’s good. I still have a lot I need to do though. This progress video gives away most of the game, but most everything will be changed before the game is done.

That is interesting looking environment. It kind of looks like a hybrid of ogranic environment and metallic sheets. Looking nice this far. It’d be great if gun had some animation on it. Also, the process of going through portal is a bit like a chop. Some effect on screen that adds the immersion of going through portal would be nice. Like a quick warp 2D filter or something like that.

Looking good so far. Maybe add a muzzle flash to the gun to make it more obvious that you’re shooting it?