Textures are only one side of the coin though, the other is the actual geometry.

Plugging the generic passes into LordOdin’s setup is great with preserving textures, but it might make small pieces of geometry, small geometry-based details, and hair/fiber a bit more muddy.

I tried that node setup (OIDN denoise 5GB ram) where passes got denoised separately. But it’s not suitable for my pc (mining rig actually where CPU, RAM and others are the cheapest, but with good GPU’s). So that node might not be suitable for every pc. Also it’s missing volumetrics I think. (Volumetrics are missing in the render). When using the node, pc starts to lag tremendously. So I have to stick with the simple node setup.

We should see the meaning of “best result” that each one has. Blurred result and less detail does not mean less noise, it just means that noise is less visible. I would love to see more of those scenes (.blend files) where clearly not using denoising passes gives better results, in order to analyze it. For now I have only seen screenshots and videos, but no scenes (.blend files) to experiment with. I have uploaded most of my scenes so that everyone can do tests.
Anyway, this does not interest me so much. When devs can solve the RAM problem, I will use nodes setup like LordOdin’s.

So I rendered out a few of my old scenes with the simple denoise node setup. All examples are 50 samples per frame, 3 diffuse, 2 glossy bounces. (I used 720p because I focus on graphics for the web/social media like twitter, facebook etc.)

Nice! Denoising seems to be on its way to replace the need for buying expensive rendering hardware.

Following up my previous image, using the regular Normal and Diffuse Color passes in the Blender 2.81 Compositor’s OIDN Denoise node turns out to yield better results than the dedicated passes (Denoising Data ➔ Normal and Albedo). So here’s a new image for those wanting to try OIDN. 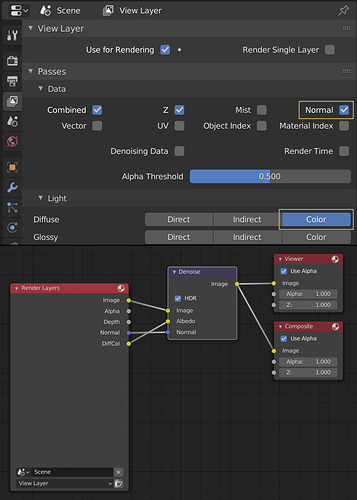 It’s a difficult scene with volumetrics, and blinds in front of Window. 50 samples, 3 diffuse and 2 glossy bounces, caustics off.

At first I didn’t see any difference but when enlarging it, if found this:

As I mention earlier I did test this setup and dedicated nodes setup and this normal/difcol yield better resutls in like interior scene. On the other hand on that test scenes that are poping up in topics (cube, sphere, etc.) dedicated setup proved to be better. I guess it needs more testing and it looks like that there is no general setup for all situations (if you want to reach the max possible quality).

Yesterday while helping a guy in this thread I’ve made some “denoise data vs nor+col” tests with that scene (that I haven’t saved tho) and shoot some zoomed SS from the compositor.
The scene had volumetric, reflections, but not normal/bump texture maps, just geometry.
As you will see, denoise data seem to deal better with normals and preserve reflections, the normal+col passes data instead seem to blur a lot and mess normals tryin to sharp geometry details.

Edit: forgot to mention that this test was done with very few samples (something like 300).
I think that the result could be samples dependent so it may change or be overturned at high samples and have a clear winner, so I suggest you guys if you have time to test it at different render samples.

Here a test with Pabillon Barcelone, 20 samples (duplicated that chair because I thought that strange things could be happening with depth):
Using DiffCol and Normal: 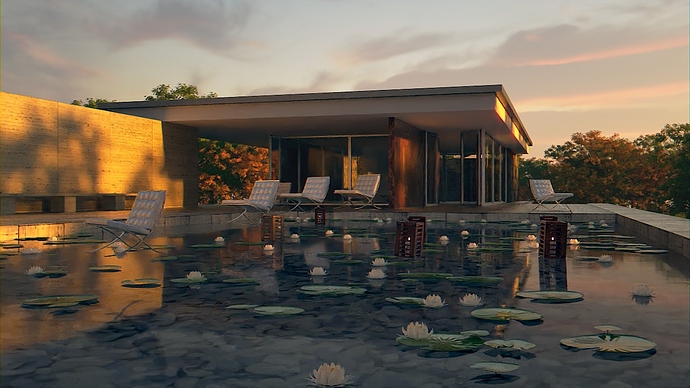 Compare quickly changing one over another.
I notice two big differences. Using DiffCol there is more detail in chair. With Denoising Albedo transparencies are better, for example in water.
So I think that perhaps simple nodes are not the best solution in general. We should look for the best combination of nodes.

Here are comparison of Optix and OIDN. (Where OIDN is used with simple node setup with DiffCol pass and normal pass).

Check the bookshelf at the wall on the back, in Optix it is completely missing.

The way the normal data is branched and manipulated allowed for the recovery of nearly all detail that would’ve been lost otherwise (due to the gamma nodes and the sharpen node). It also works well with specular surfaces, leaves almost no noise behind, and uses just one denoise node.

Now of course it’s a 12 hour render because I wanted to maximize quality, but it shows that with the right setup, OIDN does “remove the last 10 percent of noise” far better than the built-in denoiser.

Interesting approach, thanks for sharing!

How does it compare to this node setup?

You’re only modifying the albedo pass there, the details I recovered were only found in the normal data.

Nope. No matter which setup I use, details in hair systems and normal maps are being crushed. Up to now, my best option remains high samples.

EDIT - for clarity, this is normal maps with tiny details. Larger detail normals are OK.

By the way, does anybody know the difference between the regular Image pass and the Noisy Image pass?

If the “internal” denoiser is enabled, image will return the image denoised by the internal denoiser, otherwise they are the same.

otherwise they are the same.

In theory. You see here someone having problems:

Am i supposed to use the “Noisy Image” output? It seems to create very strange results with very low spp as you can see in the pic, even the image in the middle looks worse than the one on the left. [Image1] (image says passes but i means samples)