Here’s a big worm on a little planet. Not much else to say about it.

This is a project I started a very long time ago, but could never quite get it right. I finally figured it out. 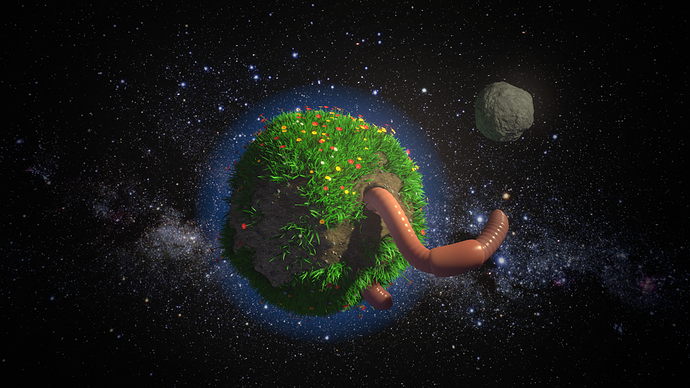 I like it! A few critiques though. A little bit of texturing on the worm to make it look a little less smooth and plastic would go a long way. Also, the asteroid looks like it was just chucked in for variety, but doesn’t really fit. Otherwise it looks really good!

I would suggest dirtying up the worm a little. I like the shininess already, but it looks too clean.

http://www.blendswap.com/blends/landscapes/mini-world-360-shot/
Looks great though. Interesting how we developed our ideas completely seperately

Ok I made some improvements to this one. Got rid of the moon since people thought it was just some random asteroid or something. Wasn’t very clear what it was. Also changed up the backdrop and improved the atmosphere a bit. 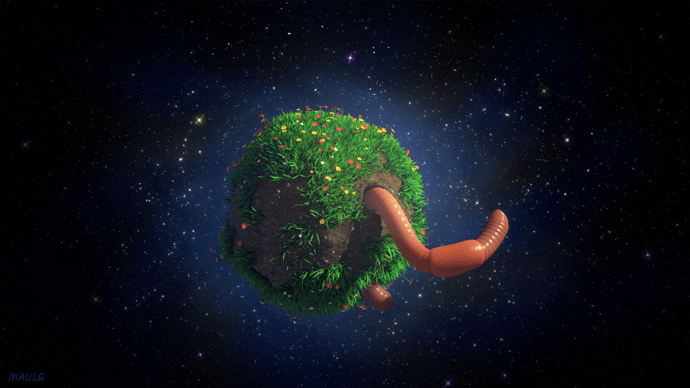 Beautiful, You’ve definitely improved upon the worms shade. I also love the colour in the scene - it’s very rich and compliments and contrasts the right amount. I feel the composition is slightly heavy - with the worm out one side and empty space on the other, but this is only minor.
do you have a 1920*1080 render I could use for a wallpaper?

I don’t but I can sure make one. Give me a bit and I’ll post a link up here when I make it.

You really need a SSS material on the worm.

It is an SSS material.

It is an SSS material.

Then it’s imo just not SSS enough. You need to scatter the absolute s**t out of it. ;D

I really like the idea and the render, but the worm just isn’t translucent enough. Imo.