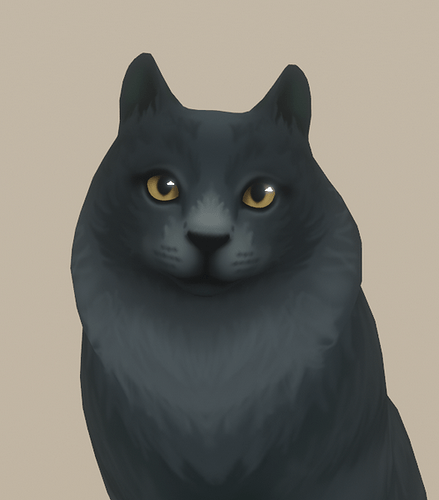 New sketchbook for new year.
Turns out not doing any kind of long-term project, not following a schedule, and not doing any challenges… was a bad idea =D
Hopefully I’ll sort things out soon(-ish) and get back into shape. There are things to do.|
For now, here’s a cat =P

Frankly, I don’t know how to start again. Mostly I’ve been curled up in my chair, asking the universe “What’s the point of doing anything?”

Skipping SculptJanuary seemed like a good idea at the time, but now I think I needed some kind of push.
I went and sculpted a head, but got stuck on short stylized hair. How to make it lowpoly but stylized in the way I want? No idea. WiP: 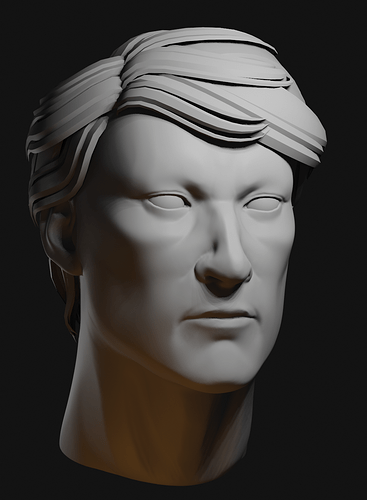 I’ve decided to get back doing Sketchfab Weekly Challenge. The way I was going about it last year (for a few entries) was to interpret prompts as some characters and props for a fantasy game. Most (probably all) of those I already have would need to be re-done to be actually used in a game and style/workflow is far from being finalized, but it’s a thing in progress.

Last week’s prompt was “Fuzzy”, so here’s a background character - Charlotte.
I’ve tried various ways to add fur, but so far hasn’t found the one I liked =( It’s hard. 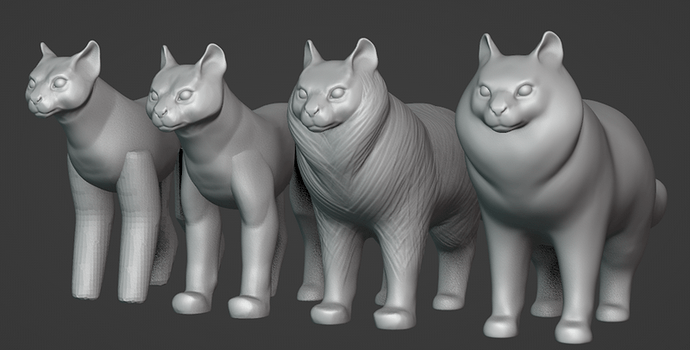 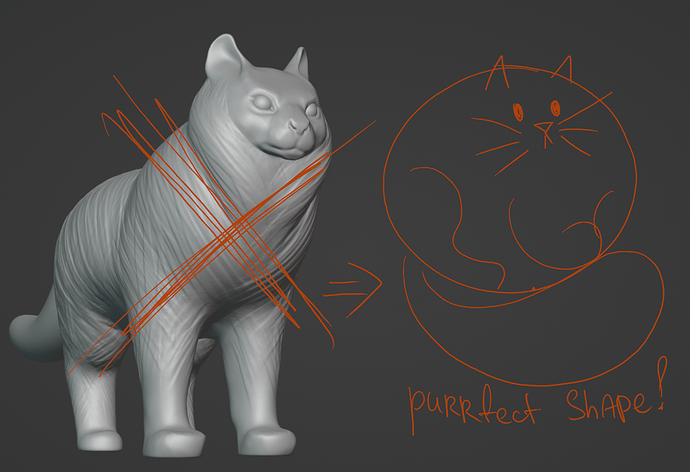 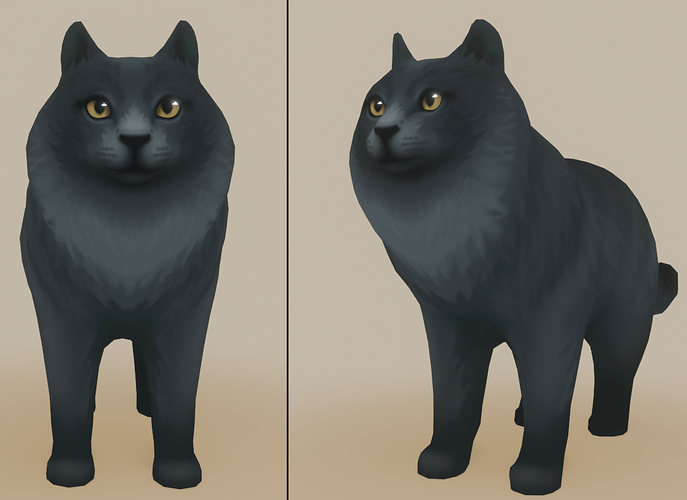 On traditional side of things:
We’ve got a lot of random polymer clay in my house. I find it wasteful that it just gathering dust since the person who bought it lost interest (for now at least). I want to find some use for it. The only caveat is that I don’t know anything about clay properties or sculpting irl.
So I tried it out - using Sculpey III - and made a familiar shape, to get a feel for it. It’s super stiff, I’m not sure it’s supposed to be that hard to deal with 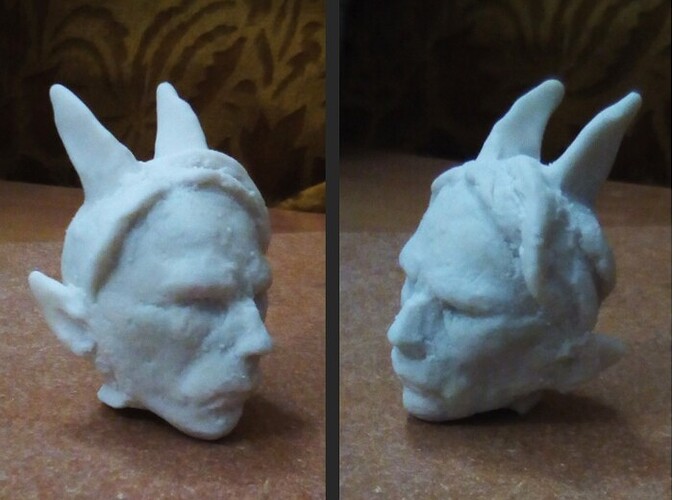 Sometimes, I feel like everything I do with GN comes down to curves

While struggling with stylized hair, I thought it would be nice to be able to control parallel curves with one master-curve. Profile is made up of multiple splines > radius scales ever spline profile individually, so they don’t arrive in the same point at the tip.
Here, “user-controlled” curve radius scales the distance between the separate curves from the position they would have assumed normally. The “thickness” radius is controlled by a Float Curve instead.

At some point it occurred to me that the idea was not that good, but I’ve come to view it as an exercise for brains so I’ve finished it. It even unwraps nicely, though needs to be scales manually. 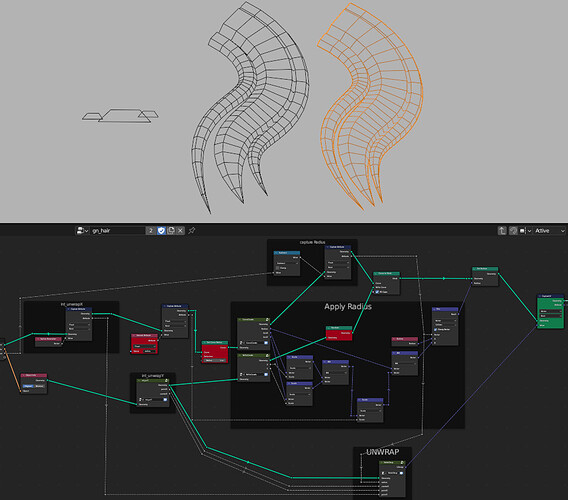 Also, before that made a group to spawn random children from a master curve. Too random for my tastes hence the multi-spline profile idea.

It’s super stiff, I’m not sure it’s supposed to be that hard to deal with

Polymer clay is super stiff; you can only work with it out of the package if it is extremely fresh. Sculpey III is one of the softer ones; Fimo is so hard it can’t be worked even fresh out of the pack. Back when I played with it, the pros all chopped it up in a (dedicated) food processor and then ran it through a (dedicated) pasta machine to warm it up and make it more malleable. Especially if it’s old – if it’s really old, might have to add some liquid extender to it while chopping.

Looks like we all are having trouble to get going in this new year, darnit. Yay, cat!

There is also stuff like this, what is infact just a drill stand with a plastic stopper. 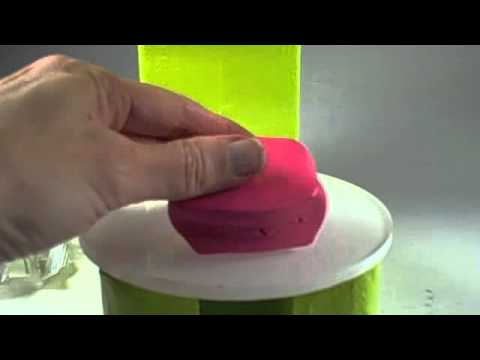 If its too hard you can also use some mineral oil ( not too much).

@piranha4D @Debuk ah, that sounds like a pain. I suppose I should experiment with it: maybe I’ll be able to at least make beads out of it, or something with low-frequency ornament

For Sketchfab Weekly Challenge last week’s prompt was “Umbrella”… but since I was avoiding actually doing anything, I missed it. This week it’s “Love”. So i though, ok, it fits the picture that I had in mind for last prompt so I might as well combine them. Yeah… I’ve kept avoiding it as well

In the end, I figured I had to do SOMETHING, anything - let it be messy and completely destructive, but at least it’s better than nothing =P 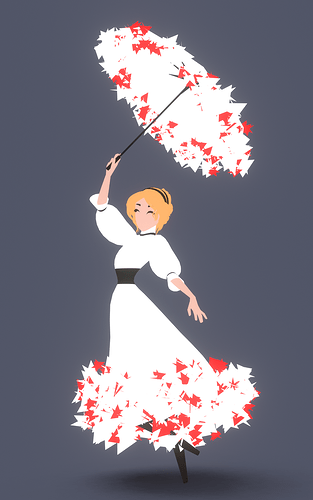 Better to do these characters right and in my own time, than stress over messing them up. 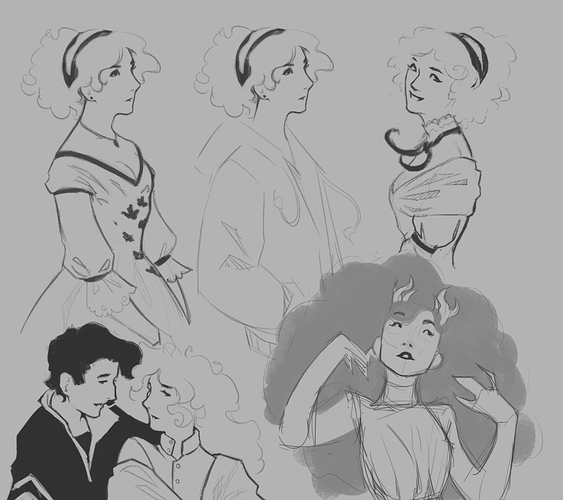 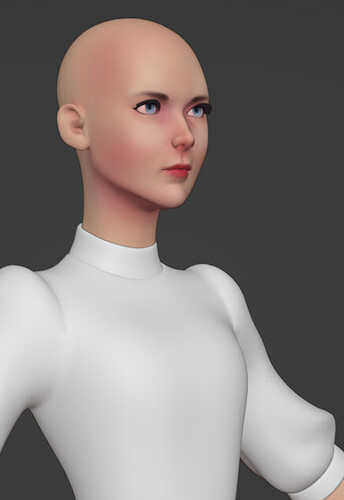