Bionicle no.3 (no name yet)

This is my third Bionicle model. I’m still not all that happy with the way that the gun in his hand doesn’t show up, but I think that is just the pose. 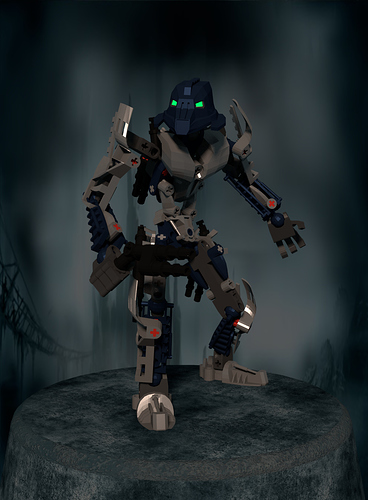 Tell me if you think of a good name!

Pretty cool! If you put some textures on it, it would be awesome!

I think it’s a combination of the light level being low (and the gun being a dark gray), and the position of the gun that draws a straight line along the “crotch” of the robot. Tilting it down or up would probably help, in addition to making it a lighter gray, and upping the lighting present in the scene for a bit more contrast (at least on the darker colors). Nice work, though! I liked the Lego figures, and yours looks pretty close to a 3D version of them.

Wow, cool. I’m that there are still some bionicle fans left

OH! My childhood comes back, haha good! But don’t remember that you have to add some bevel or round edges. Sharp edges are only on surgical knifes