Rendered in Cycles, using the Ocean Sim, dynamic paint for water displacement and a particle system for spray. Crew made in MakeHuman. 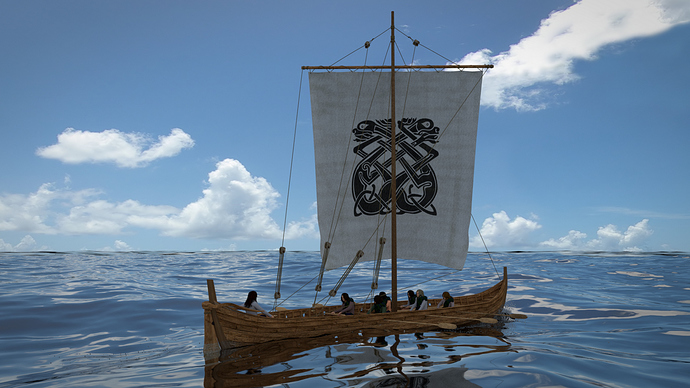 Phew, this was one of those images where I learned more than I thought I would! I initially messed up the Ocean settings, dynamic paint effects and the animation speed of the ship. I realised (after a long time pulling my hair out) that I had the ship travelling at 20 m/s, no wonder the spray was kicking up like an explosion and the ship was leaving the water after hitting a big wave.

Big learning for me: pay attention to scale when using physics!

The dynamic paint is really cool. With the ocean modifier as the canvas, I have two displacement brushes, one the same shape as the hull and a sphere at the bow with a negative displacement to push up a small bow wave. I also have a wave effect brush. I added a particle system at the bow to create spray with collisions enabled for both the hull and the ocean surface.

Full res and a bit more on the history lesson at: http://gavin-bain.blogspot.com/

your ship looks nice! i like the texture of the planks and the canvas. the symbol on the canvas is also very interesting!

does it have a historical background or did you design it?

It is quite good.
The sea can be a little more rough (in terms of scale) the Birlinn is looking like a miniature ship.
The area where the sea meets the sky (horizon) can be hazy or blurred with slight dof…
a little more shadow to get a sense of direction of sun…
it is already quite amazing…