I got a Pic
why are the banana so dark :evilgrin: :evilgrin: 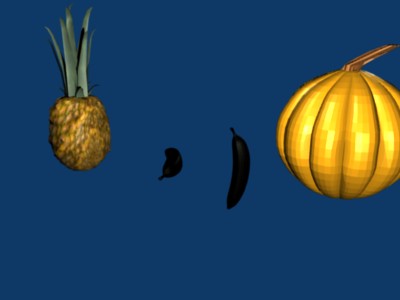 Because you put it behind another object not allowing the light to pass, just add another lamp… or move that…pumpkin?

maybe they’re black cause we have a knit cap over our eyes. Or, maybe they are not UV mapped to an image.

For petes sake this could be anything. It’s outside the lamps’ clipping range? They have a black material? Diffuse is off for their lamp? As usual you need to provide some more information or a blend file if you want actual help.

hmmm… no
my camera has a sport light with it and in another file is perfect why is it doing it in this file?

give me an easy register host and i’ll upload the Blend file
i wish it would possible to upload Blend file on this forum!
how Strange we cannot do it !
Tansk & Salutations

on the viewport top i saw an empty called Ma-Banana !

the render seems to be giving a full yellow banana
but no the preview screen which show only the middle of the banana yellow ?

Wha’st happening there?
i never saw this organisation of object and material before ?
Salutations

Seems the Banana material contains an image texture that’s mapped to the Empty position (look in the Map Input tab). If that’s the case, when you move the empty the banana’s texture will move too.

I’ve never had this happen in blender, but whenever this happens in anything other than blender it’s often the normals. Maybe the normals need to be recalculated pointing outside?

I select the Empty then the map input
Object is n with the name of the material ?

i remember vaguely seing something like that for a piece of wood!

i know that you can scale of the 3 axis on the empty
but then why not use the dim xyz in the map input menu?

AndyUltra:
That avatar makes me giggle everytime I see it. It reminds me of an old cartoon series… cant remember the name of it though. With cool cat in it? and others.

Did you try the upload services at all the links I gave you before? One must be easy enough for you to use?