I was playing around with drivers (using the new and wonderful Ctrl + D way of creating them), and noticed something funny: When rendering animations out it seems that the World surface backround environment texture map (a HDR image), reflected by objects rotated with drivers using glossy shader, rotates with the objects themselves.

This does not occur when viewing 3D view with method to display : Rendered. There the bright reflections remain quite stationary, when scrubbing the the animation back and forth.

Examples taken as screenshots from different parts of animation: 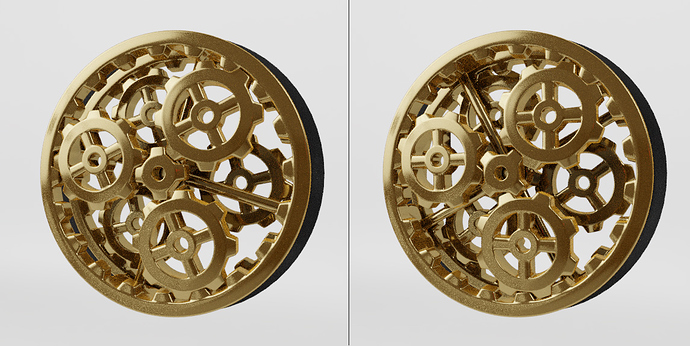 Does anybody know what could cause this (maybe there’s just some render setting I can switch)?

https://drive.google.com/drive/folders/0B4jW32ChW7tiNVgtaGZsRkF3d2s?usp=sharing if you want to check the .blend yourself.

Without looking into the scene, it’s a guessing game…
Animation (3s) looks still, observing from here… Driver drives the environment?

Look at the reflections in the small 4 tooth gear (sun) and the three 8 tooth (planet) gears in the middle… the light sources in those reflections seem to move around.

No, there are drivers controlling the rotation of gears only.

Hey; The reflection on the outer (large) gear does not change - so my guess would be a geometry issue, meaning the faces are not all even/aligned on the same plane (x,y). I would check that.

yup, could also be a normal issue…

Here’s the .blend + environment map .hdr file, you can check it youself. (I’d guess if it was a geometry issue, I should see the issue persist when scrubbing the animation in 3d view : rendered mode…)

Ok, I had a twist modifier on the gears that I had forgotten about disabled in 3D view… Problem solved!