Hello, guys. I’m mainly animator so I need some help with texturing.

I have a model of whale’s tail and I want to make some precedural textures for it. I want to have some main ‘growing’ regions, controled with some kind of random seed, like this:

So what’s the best way of doing this in Blender 2.8 and eevee? Thanks!

Here is how you can do it
first you need a black-white texture on a whale where #ffffff is where is the start and pitchblack is where its finishing.
Then with a math node you can add value to it over time and use additional math node or color ramp to convert it to black-white map
Then you create mix shader with factor controlled by this texture.

Thank you, this works almost perfectly:

But there are some problems here:

But my model has unapplied mirror modificator and texture grows not to the middle from both fins’ ends but from one fin’s end to another. Is there a way of fixing that? Thanks a lot!

If I’m not mistaken, “generated” textures are projected onto the model. That would explain why they change with the model deformation. If that’s the problem, you need to use UVs to avoid that.

I used generated gradient to make gradient to my cube in a fastest way possible. To fix your problem you can use your own texture like I explained in my first post here. This technique have more advantages. You can paint patterns like vines or dots and they are going to be animated in a cool way

A vertex_color layer can also be used, or a specific UVmap just for this effect.

Thank you, guys. Final node tree looks like that: 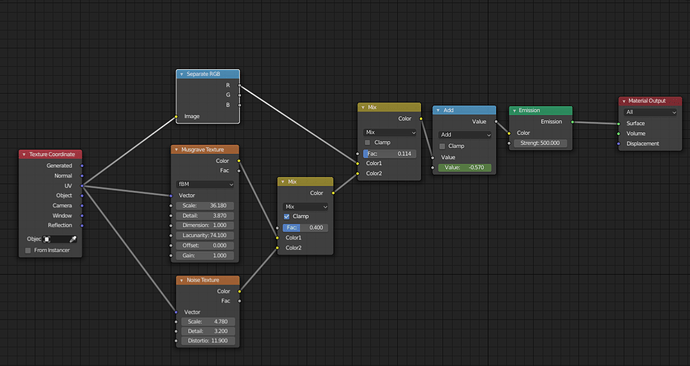