The armature in Blender has “bone rolls” that are fundamentally incompatible with the Epic skeleton in Unreal Engine such that if you exported a mesh and armature to UE using FBX then try to “retarget” an existing animation to your armature (now called a skeleton in UE) then it becomes a very warped mesh during the animation play through. Even if your bones are correctly named and have the same hierarchy as the Epic skeleton (which is the skeleton that the free animations are based on).

But a clever guy called Rakiz has written a script to fix this (available at https://www.rakiz.com/uefy/ and I’ve purchased it) but here is how a fixed armature looks in Blender: 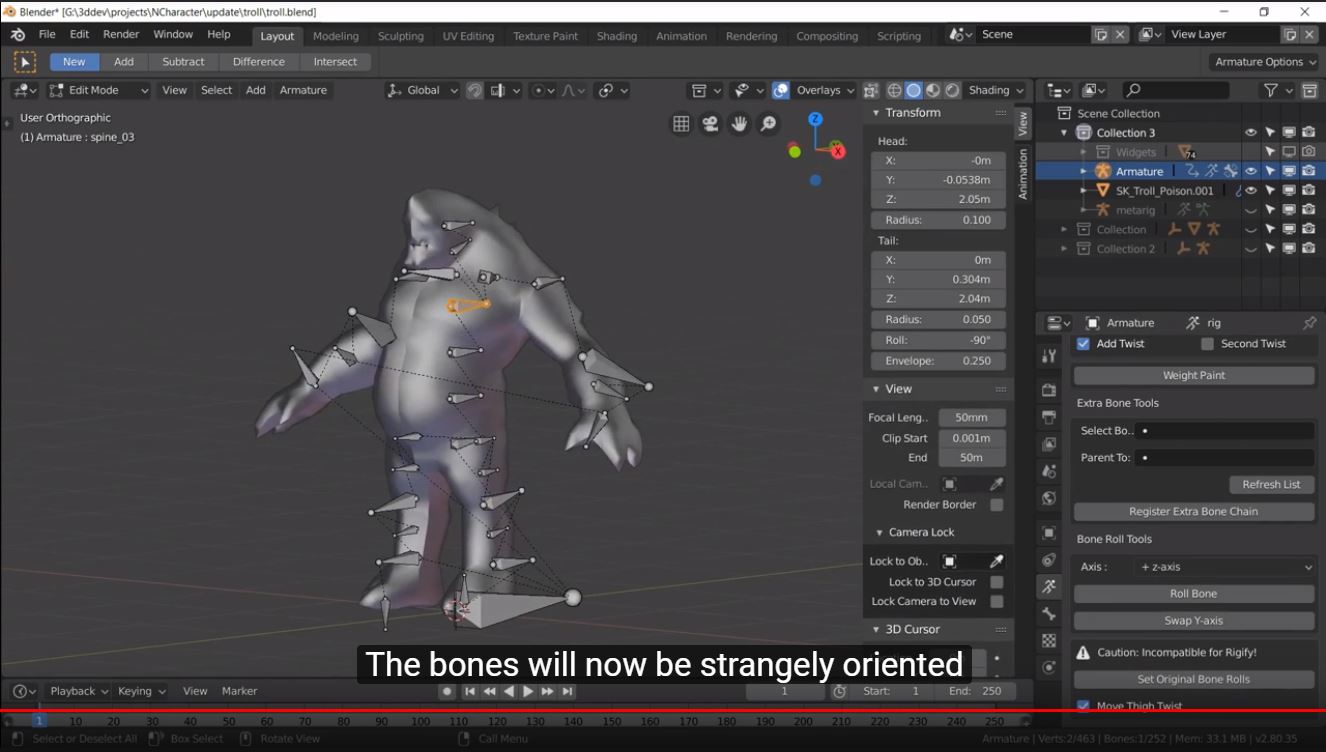 Would it be possible to have this feature built into 2.81 but with the bones looking more normal, if you get my meaning, rather than sticking horizontally outwards like this? How can I request it, please?

If Blender can be made more easier to work with the Epic skeleton then many people can create Epic skeleton compatible humanoid meshes (skeletal meshes) for the Unreal Engine marketplace (which is one of the UE marketplace rules when creating and selling humanoid meshes) which would obviously help to increase the popularity of Blender within the game development industry.

Yea this has always been an issue
Blenders bone Axis uses Y forward instead of what every other game engine uses
So Blender skeletons are incompatible with most other things sadly.

( I assume this was a decision made many many years ago and it really needs to change.)

They really really should allow us to change it or have export options that change the axis upon Export, for engines such as Source Engine, UE4, Unity and so on.

Well I’ve found out how to request a new feature and done so here: https://blender.community/c/rightclickselect/BZcbbc/

How is this not solved by the fbx exporter’s remapping options? It provides axis remapping for both scene and armature.

I don’t have experience with other game engines other than Source engine
I just know the guy that wrote the Importer for it doesn’t want to swap the bone axis for silly reasons.

I’ve seen very few people complain about this very subject, don’t know why there’s not more of them, unless they just deal with it.

even with the uefy script that you showed on top doesn’t solve most of the problem as everytime you export from the rig and mesh there will always have a problem inside the engine which I don’t know why blender developer doesn’t make more improvement on this as I’ve seen more work of blender are all still’s and some animation but not much on the game dev pipeline where I assume they can’t go toe to toe with Maya when it comes to fluid pipeline, I never thought that my colleague at U* said that they can’t integrate Blender in the production. Now I realize

Have you tried auto rig pro add-on? It’s got an export to unreal engine option that works perfectly with the Epic Skeleton. No need to even retarget animations. I can send you a copy if you can’t afford it.

Hi, I just made an account to ask for a copy…

By the way, wouldn’t it be easier to just make a static mesh in Blender and rig it and animate it in UE?

I don’t know if distributing free copies of paid software is frowned on here. It falls into some very sketchy legal territory, so I would imagine it is, but I don’t know, so I won’t comment on that. However, you shouldn’t need it either way- UE has free plugins that solve this issue