Blender compositor insted of After Effects?

I have a question about general experience of integrating blender in the pipeline. In project of yours blender can completely substitute After Effects? In a small size animation studio worth it to completely use the “Blender Way” in production enviroment?

Im a manager of a new firm, and i have no past experience of Blender, but we belive in opensource and want to give a try.

well, speaking for myself only, it seems to be easier to do things in After Effects than in Blender. that’s not to say that you couldn’t accomplish many of the same things in blender, but as an AE user for several years now who’s been trying to use blender’s compositor for more things lately, AE by and large does things easier and faster.
Of course, this could mainly be caused by the learning curve of the node system as opposed to AE’s interface…I’m just speaking from my own recent experience. I think compositing in Blender requires more in-depth knowledge of how to make effects work because you have to build a lot of things yourself with nodes (which is why I say AE does things easier and faster).

Blender is a lot more like Nuke than AE in terms of compositing. Most things you can do in AE can certainly be done in Blender, but there will always be trade-offs between commercial and open source software.

Thanx for the answer. Of course the learning curve is a basic question, but i thinking about is blender compositing capability now is enough to be a studios only compositing solution? (when artist can handle the software well) Or there is a need for an other external compositing software in the pipeline? (again, aside from the users knowledge)
Is wort to step by step replace the external comp. soft. to blender and set-up a full pipeline for opensource?

I think project mango/Tears of Steel did a good job of showing that you can take a large project from start to finish using only Blender for every area of VFX, including compositing. so I guess the short answer to your question is ‘yes’.

Glad to, hear, we will give a try!

I’ve used After Effects on some pretty big feature films, along with node compositing software, and for the past few weeks I’ve been trying out Blender on a tv movie as the only compositing solution. It’s working out great. Honestly, the only thing I’ve been bummed about is the lack of a film grain/noise node. But that’s easily created with textures.

I would say Blender should work fine for 95% of compositing jobs. I’m having trouble thinking of something it might fail on.

Muzzle flashes are a bugger in Blender if you have to do a lot of them.

Honestly, the only thing I’ve been bummed about is the lack of a film grain/noise node. But that’s easily created with textures.

This may seem like a silly question, but how is a film grain texture made? It sounds intriguing.

Here’s a couple ways I’ve done it, they’re pretty similar. The one in the clouds example was an earlier test, where I applied it to a plane that filled the camera view, then rendered it. It occurred to me later that I could simply use a texture node in the compositor.

It’s not in these screenshots, but you should add a blur to it, set pretty low. 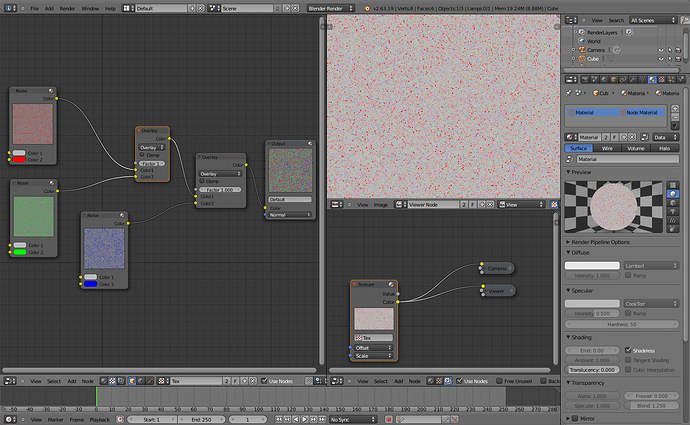 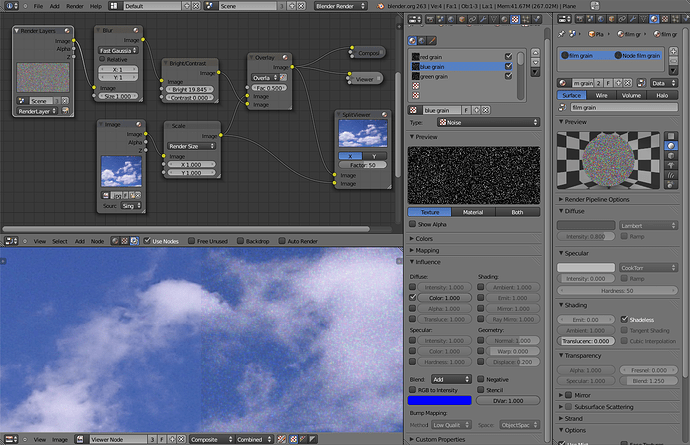 Another thing you may want to try, to kind of balance it out a bit (the red comes on very strong), is to pixelate it a bit. Especially if you’re working with digital video instead of actual film frames. Hopefully this will turn smaller blue and green grains into bigger blocks of color, even with the red.

Here’s a good technique I found here at Blenderartists for pixelating an image. Also, make sure when you set up the textures, you put the noise over 50% grey.

If you blur the grain, pixelate it a bit, and put it over your CG at a low opacity in Overlay mode, it should look great.

Also, you could set up this grain stuff in a separate project, render out 300-500 PNG frames of it (whatever would work for most of your needs), and then you’d never have to set it up again. Just bring in the image sequence whenever you need grain and put it over in Overlay mode and adjust opacity (factor).

Thanks, hype. I’ll give that a try.

Hey Hype, I tried to use that pixelate technique to derive an average color for a whole image, that is shrink it to one pixel the enlarge it back to full size. But it failed.

I use both, and while there is little that Blender could not do, for me, the crucial part of the puzzle is time and ease. Can I green screen in Blender yea. Can I do it faster (and arguably better) using AfterEffects and Keylight? Absolutely.

Does everyone have the $$$ for AfterEffects? Absolutely not…

I find that the timeline UI of AE is a more intuitive layout for manipulating timebased elements. So if you are stacking many elements and calling them at a variety of times during playback, you can’t beat AE. Nodes just are too fiddly for that motion graphics kind of work, but great for grading and general keying/comping.

Also, After Effects handles many camera formats correctly and Blender does not. If you deal with a lot of RAW footage, you may need a converter in the middle of your workflow prepare it for Blender. Transcoding almost always lowers quality and take up time.

It seems to me that it’s always good to experiment with different tools and approaches, and also to be pragmatic about the fact that once a “shop” has standardized on a particular tool and modus operandi, they’re extremely unlikely to change anything about that … for obviou$ rea$on$. But you should always be experimenting, looking at how different developers have considered the same problems in different ways and found different strategies for dealing with them. It always pays to put another pen in your personal pocket-protector… you just never know when having done so will cause a very useful little light-bulb to light up in your head. Blender is by now easily a complete-enough tool to be “one of the valid contenders,” even though in real life one tool rarely replaces another tool in any workflow.

Also, you could set up this grain stuff in a separate project, render out 300-500 PNG frames of it (whatever would work for most of your needs), and then you’d never have to set it up again. Just bring in the image sequence whenever you need grain and put it over in Overlay mode and adjust opacity (factor).

off-topic, but can we politely ask for a tutorial series from you??