I’ve spent some time recently doing some of the Blender tutorials out there on the internets, in particular Blenderguru.com’s asteroid tutorial, which uses a particle system to create some small rocks around a large asteroid in space.

I noticed that, while working with the particle system, Blender gets slower and takes some time to respond to user input (mouse clicks etc.) and navigating the 3d viewport gets really slow, like when playing a game that is too demanding for my video card.

I’ve had a look at the CPU and GPU load while experiencing this, and neither are anywhere near 100%. The CPU load is always somewhere around 25% (average of the 4 cores) and the GPU has virtually no load at all. I just wonder if there is anything wrong with my setup (drivers, blender setup etc.) that might cause this?

Also, while rendering (blender render), the CPU load does not exceed 40% (again, an average of the 4 cores). I have tried both the automatic and manual settings of the no. of threads. The RAM slowly builds up to full load (4GB) while rendering. Is it possible that the size of the RAM is limiting the CPU performance? Using luxrender, CPU load is at 100% all the time.

This is getting a bit annoying, I appreciate any advice.

It sounds like Blender is not using all of your CPU cores. I don’t know why that would be though; I’m not sure whether the particle system is multithreaded, but the renderer definitely is.

since it doesn’t use 3 of 4 you can assume it’s not multithreaded. that’s not a bug 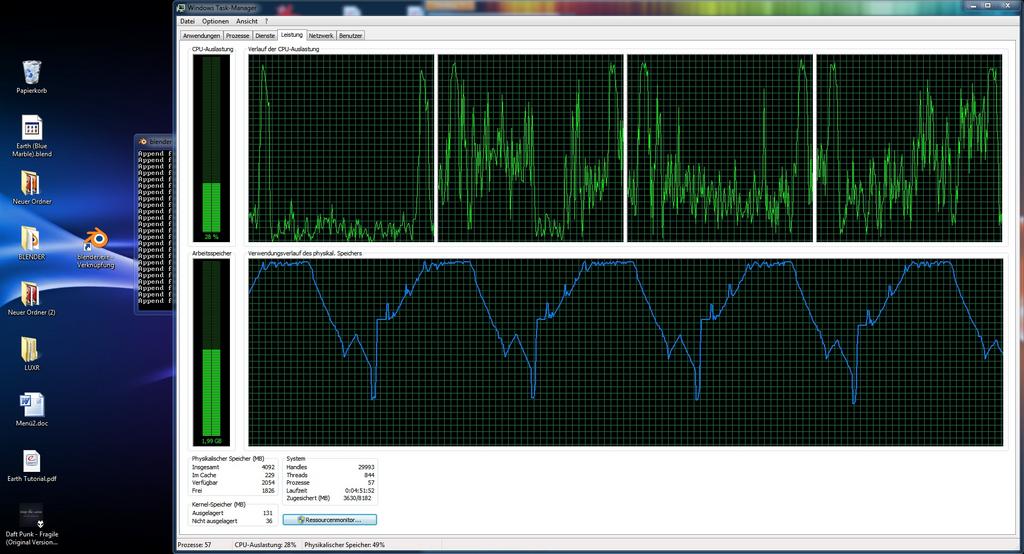 This is the task manager during the rendering process. Most of the time, the CPU load is about 25-30% like in the screenshot. Only once during the rendering of each frame the load increases to 100% for a few seconds, in the cpu graphs thats where there are peaks in every core simultaneously.

that’s also correct behaviour, not a bug or something you can change. accept it all and move on.

It looks like you’re using all of the available memory, which means the system will start swapping and thus the hard drive becomes the bottleneck.

I see, so buying more RAM would improve performance here? How much RAM do “rendering pcs” have? For gaming, 4GB do, but since the price for RAM is so low right now, I might as well upgrade to 8 or more…

You would of course have to switch to a x64 bit system, to use all of the RAM.
And yes it will definitely improve your computers performance!

I am using x64 as I wrote in my first post =). I am just not sure whether its worth the money.