NOTE ABOUT THE POLL: If you vote “no” please explain why. Just voting “no” tells me nothing on how to improve the mockup.

Yesterday, I had an idea for Blender’s UI. When I first started using Blender about three years ago, I was really confused on how to create and dock windows. I used Unity before Blender and I was used to the way Unity used tabs that you could drag around to arrange the different windows. When you drag a window tab to the center of the viewport, it would create a floating window. If you dragged it beside another tab, it would merge the two windows and allow you to switch between two different windows in the same window space by clicking the two tabs on the top. I you dragged the window between two windows, it would place the window in between the others. Also, you could right click the tab and click close to remove the window tab.

This IMO makes a whole lot more sense than the ‘drag the corner to split/merge window’ that Blender currently has. Also, when you have a really complex scene in the viewport and you need to open the node editor next to it, I would have to split the viewport window which creates two viewports and causes a massive fps drop.

So, here is a quick mockup I have made in Krita of what my idea for Blender’s UI should be like. 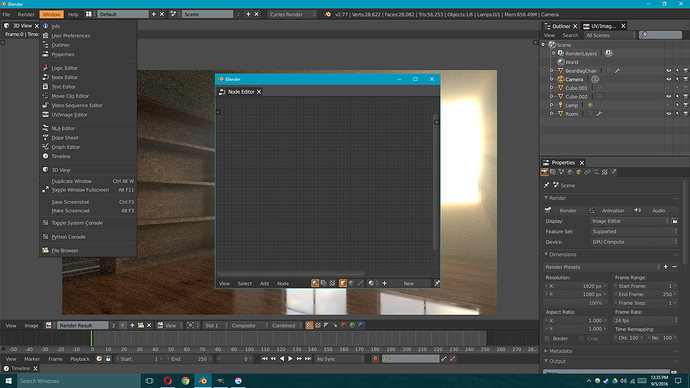 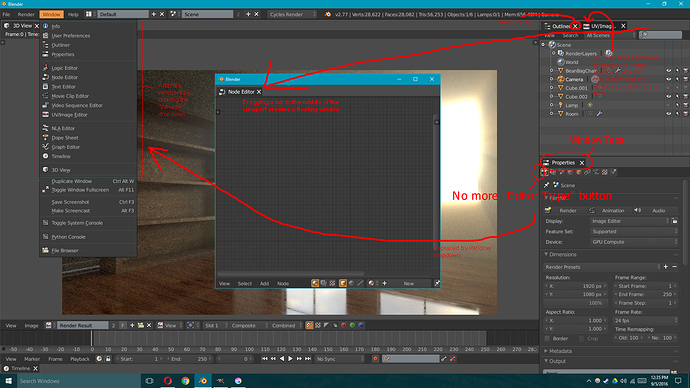 I think this would be a step up for Blender’s UI. It will still be extremely customizable, if not more, and it would be easier and more intuitive to use. Please help me get this to the UI team. This would make Blender a whole lot better.

I preffer safe the space in the UI. And when you spent a few time iwth blenderr you have a ui custom and don’t need change nothing

It’s kinda hard to understand what you wrote, but I think you’re saying that you prefer to have no tabs for the sake of space above the windows. I understand, but being able to have two windows in one place by stacking tabs can really clean up the UI. Also, I forgot to mention, the tabs should be able to be hidden (like UE4’s UI) by right clicking and choosing hide. That should hide the tab and give you a full window.