Hi guys! Here is my latest scene , created in Blender 2.49a with help of Gimp(Texture painting , retouching,…).It’s NOT just a surreal scene that come from my imagination.It wants tell you a story…a story about a Nation , about brave people who paid very much JUST FOR FREEDOM!!!
Here is the story:
For years we, people of Iran, live under black shadow of religious dictatorship of ISLAMIC REPUBLIC.In recent years , some politic groups called Reformers , tried to change that situation with respect of basic laws of Iran.They wanted to REFORM NOT REVOLUTION.In the recent presidential election , millions of people decided to vote Mir-Hossein Mousavi , The reformer candidate.Mousavi and his fans chose GREEN as an icon of what they wants(freedom , peace , democracy ,…).In the nights before election thousands of people came to streets to join support carnival for our reformer candidate.In the day of Election 40 million of people(85%) came and voted, in hope of CHANGE…Story gone sad from here…
They cheat us.They cheat our votes…Ahmadi Nejad (current dictator president of Iran) won the election with 64% of whole votes!!!We hardly surprised!!!How it possible!!!We all know many people already hate him.And just some radical folks support Ahmadi Nejad.
We was sure that they cheat us.We don’t accept the results of election.We come to streets to show our protest ,but JUST with peaceful
demonstration…The story gone bloody from here…
They attacked to people who show their protest peacefully. they killed many of them and arrested , raped and injured many more(over 200 kills and 10000 arrest and injured!) They change our hope to disappointment, our happiness to sadness …our GREEN to RED! Which is the subject of my Blender work.
You people of free world , I know you forget my work soon(I know it’s not great artwork and it has many weak points).But please never forget it’s story.Never forget people who killed , arrested and injured just because they wanted FREEDOM!!!
For viewing just one of their crimes during the events after election view this video.The girl named Neda , 26 years old studding philosophy in Tehran university.She were shot by a sniper from a building!
(WARNING!!!This video contains offensive content!!!)
The character in my scene designed based on Persian myth “Zah’ak” By “Ferdowsi” famous Persian poet.Zah’ak was dictator king , and some day Evil came to him and kissed his shoulders. Until then two snakes grew from his shoulder . They needed brain of two young human as food every day.So Zah’ak killed two young people every day to make food for his snakes.At last, a hero called “Kaveh” with help of people fight against him and make him down.
For a higher resolution of my work click here. 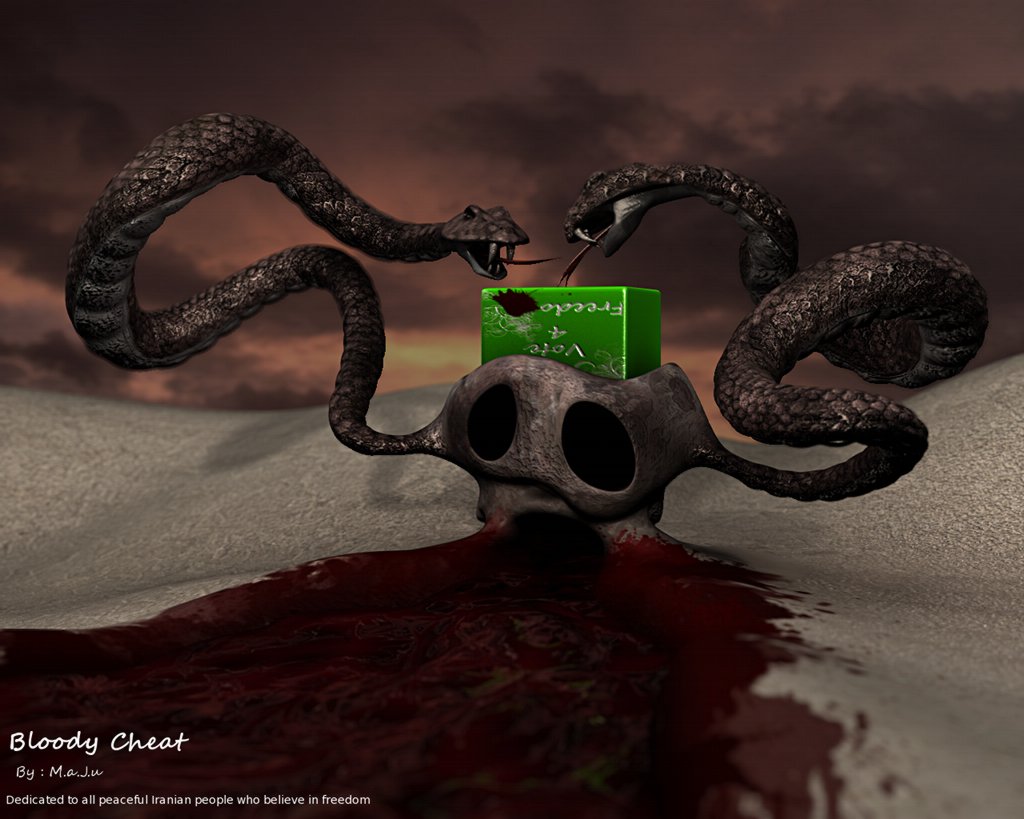 I think this piece is pretty good. Better than I could do unless I spent a lot of time on it. Very nice. I especially like the texture work.

Texturing is top notch ! But you may need to revise the composition a bit. My eyes can’t find a resting place, try looking these up:

Apart from the great scene (nothing overdone), that video was…

Lwerewof , this video is just one of hundred offensive scene which happened in Iran recently. thanks all for comments.