Hi.
This is my try hard attempt at modelling a Boeing 747.
Most of the modelling is done except for any detail. I’ll be looking at UV mapping it next.
I got all the windows out of shape and had a terrible time trying to model them. I should have just UV mapped them. Anways, not to worry.
Any comments good or bad always welcome.
Thnx. 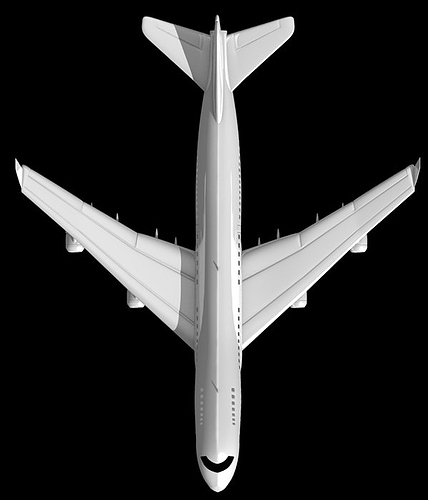 If you want to cut out the windows on a jet airliner you need to use very precise measurements for your mesh so that each window is the same size. That’s often quite difficult to do because a lot of cuts need to be made to get the precise shape and location of the windows. You can end up with a lot of verts and it can be very frustrating…

wow, that is great modelling! can wait for the UV mapping…

Yes I agree with JohnV1960. It would be a lot nicer if you UV mapped the windows. Right now they look all wavy and different sizes. Good luck!

Yes I agree with JohnV1960. It would be a lot nicer if you UV mapped the windows. Right now they look all wavy and different sizes. Good luck!

i have to say… that looks good!

Thnx for those comments guys.
I would have responded earlier but i’ve been pretty busy lately.
JohnV1960 - Frustrating indeed. Say, are you still working on your porshe model? You left a good explanation on making proper cuts in that thread. Never knew you needed to be so tenchinal. So thnx for adding that.
iliketosayblah - Thnx, but i can’t UV map yet. Well, what i should really say is that i can’t create proper textures yet.

I gave it a go though.
Dudebot13 - I got around to UV mapping the windows. My feeble attempt. Still nowhere near perfect though.
Borgleaver - Thnx man.
garuhhh - Thnx
So, im about half way through texturing my plane. Not that i can actually texture yet but any more comments or suggestions are really appreciated.
Thnx

Looks better but I don’t think that windows go that far up under the cockpit. And they are getting a little small up there as well. Good luck!

I don’t think that windows go that far up under the cockpit.

Your plane’s windows look a bit wobbly, but whatever you do, don’t get discouraged. Modeling isn’t easy… My first plane looked a lot worse than yours.

It would help if you could post the wire and the image your are using to UV map it. Typically, your image for the UV map will look like the one I’ve provided below. It’s an A380 I’ve had in my boxes for a while… I couldn’t post the whole image due to size limitations, but I’m sure you get the idea. It’s an orthographic image**, meaning that everything is at a 90 degree angle from the viewer’s eye. I built it by cropping bits and pieces from real images and correcting their perspective as much as I could. I cropped the lettering (Singapore Airlines) from a publicity found on the web using The Gimp. You need to make two images: one for the left side of the plane and one for the right. If you look at a real commercial aircraft you’ll see that the lettering on each side is different. The S of Singapore Airlines is at the very front of the plane on one side, and on the other it is towards the middle of the plane (because humans read from left to right). Go to www.airliners.net and browse the photo section.

Regarding the Porsche, I’ve worked on it a lot but haven’t progressed very much visually. As they say, the devil is in the details… I’ll post an update in a few days when I’ve actually made some noticeable progress.

** Um… except for some details… like the mirror reflections in the windows.

Edit: I found a 747 I had modeled a few years ago. It’s not really very good, but it will give you an idea of what you can do with UV mapping. I screwed up the front of the plane, so I’ll just show you the back. :o 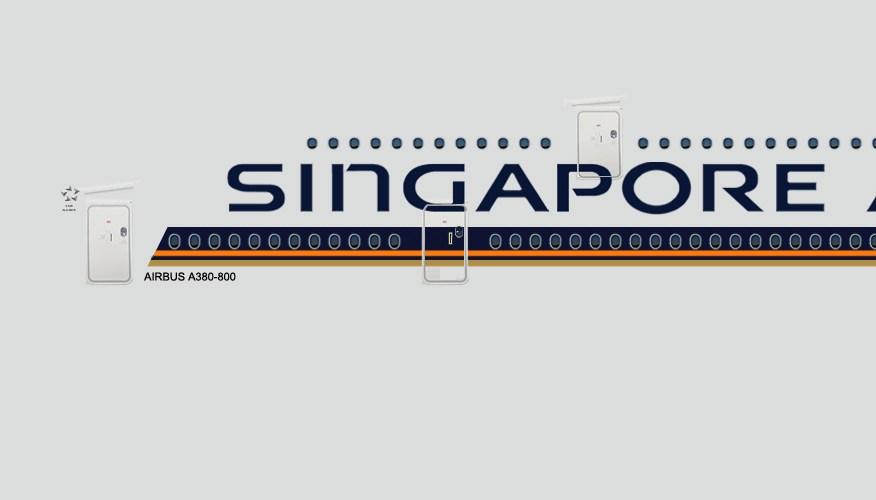 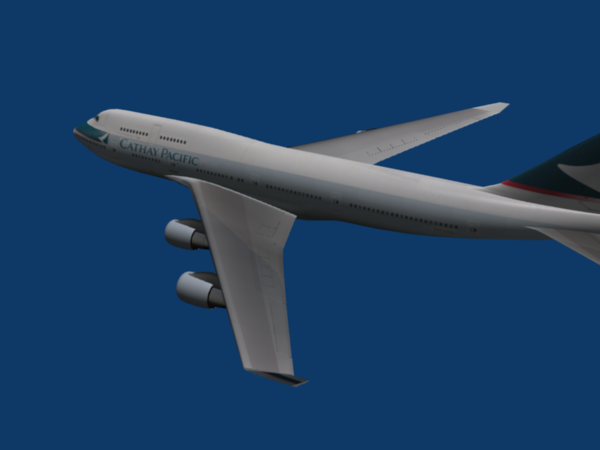 Once again, sorry for the delayed responce. I really should concentrate on the one project and see it through as you don’t learn very well when bouncing from project to project. I started a couple of other things which distracted me from this. I will continue with this though.
John V: You have helped alot. I had been UV mapping incorrectly. Didn’t know about the fact that the images needed to be 90 degrees. It all makes better sence now. Thnx for that link too. I got quite a few images off that site and have cropped them for another attempt at UV mapping.
Porshe? Still waiting.