Alright, I’m burned out on this so am calling it finished. I guess I might revisit the theme at a later date, but its time to move on.

This is my first project in Blender and 3D in a long time, and I created it as a learning experience. Turns out I spent most of my time (a couple of months on and off) figuring out how to model a passable organic form. 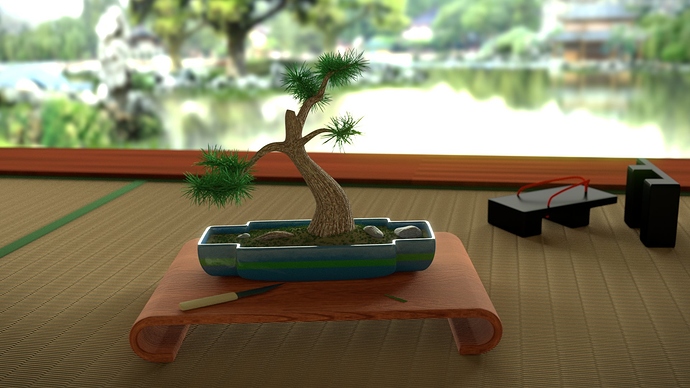 Good job, I like the mood but you’ll need to tweak a couple of things to make the whole image more authentic.

JoolsMcFly: Thanks for the comments

You are definitely pointing out things I know are shortcomings but I just burned out on this scene. Except the direction of the tatami, did not know that, will keep it in mind if I decide to go back to revise this image.

The geta was not supposed to show up in this much detail, I originally had a much heavier dof, but they are low poly modeled from a picture of a real pair.

The bonsai was very difficult for me to model, and it was the main reason I just stopped finding this to be a fun exercise in the end, I have much more to learn

I’m displeased with how the pine needles show up as well, I used a particle system to distribute them and they intersect with the trunk in several places and are not all aligned the way I wanted them to be.

I will most likely revisit the theme at some later date with a complete remodel of everything. My blend is a mess and things are not at a correct scale, which mess with camera settings and other things.

Well it’s all about trial and error, right? Good luck with your next scene!