I’m having a problem with creating an irregular shape and wonder if I need to post a bug report.

I try to create 3 intersecting button like shapes and merge them using the Boolean Union. The 3 shapes are manifold but after merging them using Boolean Union it seems the become Non Manifold.

To reproduce it, I do it as follows:

Whatever I try, when I press the Non Manifold button, the design gets broken because the new shape is Non Manifold so a lot of verteces get lost.

I played around with the Normals, regular Join (actually better to avoid this), Solidify modifier, Remove Doubles (non are present) but nothing that solves the issue.

Either I’m overlooking something or the Boolean Union modifier has a bug in it. I hope it’s the first. I attached my blender file (Test.blend.zip (172 KB)) recreated with version 2.79. In fact I first created it with version 2.72 with the exact same issue so that’s why I tried it with the most recent version.

The bottom faces are co-planar and when you intersect the forms, those faces overlap. Switching the boolean solver from Bmesh to Carve gives a better result and is known to work better with overlapping geometry, but it would be better to have forms clearly intersect without overlapping geometry.

It’s a known issue https://docs.blender.org/manual/en/dev/modeling/modifiers/generate/booleans.html#known-limitations
and no report is needed.

File -> save as dialog has a compress option. Use that instead of zip or rar, as it’s transparent to the user

Thanks for the very informative answer. Your suggestion solves the issue. I also noticed that the Bmesh versus Carve wasn’t present in the older 2.72 version.

It seems I was a little over enthusiastic past time.

I had some spare time so I tried continuing my creation but ran into the rather same problem again. I created a new irregular shape and copied it 3 times but the Boolean modifier acts strange and 1 of them will just disappear choosing Carve.

So is there still hope for merging my 3 identical shapes in their current arrangement into 1 manifold shape? I know I could just recycle the shapes from the previous version but the shape is not detailed enough and I’m looking for a more robust solution to the problem which will also occur for other future shapes.

The reason is because the surfaces are pointing in the wrong way. They describe a solid which is the size of the universe, with an air pocket in it that has the same form as your object. 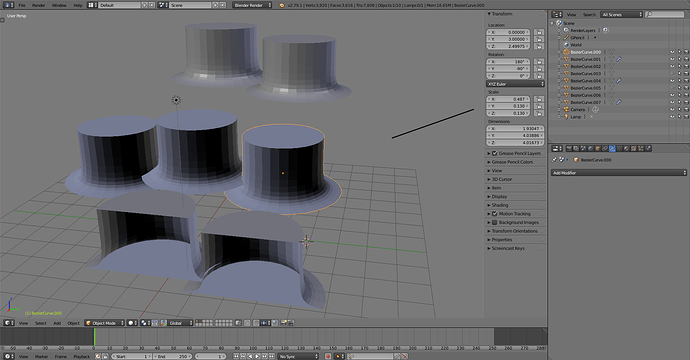 The object scale is unapplied. That’s significant in few ways:

Common troubleshooting series of operations is

Some terminology:
A shape is two dimensional - an outline or a silhouette. A form is 3-dimensional. A mesh (vertices, edges, faces) can be manifold or non-manifold because that describes a surface which is supposed to enclose a solid.

It doesn’t usually cause confusion and I can understand just fine, the context is very clear with the file, but good to know because sometimes it could when explaining these things. For example, you were using a bezier curve which describes the shape of the cross-section, and repeating it around creates a form, which in turn creates a shape (silhouette) when viewed from any view angle. All of them are relevant when modeling.

Thanks for taking your time JA12 and giving an elaborate explanation. Taking your suggestions into account I solved the problem(s) as follows:

Giving applied scale: (in object mode) Ctrl+A > Scale
Recalculate outside normals: (in edit mode) Mesh > Normals > Recalculate outside (or simply Ctrl+N). I assume this is the part that makes the surfaces point in the correct way thus “un-inverting” my shape?

Then I clone my object 2 times, arrange them how I want, add a boolean union modifier using the carve. My object disappears but then I raise it on the Z axis very slightly as to not have overlapping co-planar faces. Complete the union + remove doubles and then do the Make Manifold in the 3D printing tab.

I do wonder how one can see or detect that the object is “inverted” as in “a solid which is the size of the universe, with an air pocket in it that has the same form as your object”?

I do wonder how one can see or detect that the object is “inverted” as in “a solid which is the size of the universe, with an air pocket in it that has the same form as your object”?

The surface is drawn much darker when you’re looking at the backfaces in solid viewport shading mode. Could also visualize which way the normals are pointing at in edit mode, 3d view properties (N) - > mesh display: normals (face). They’ll show which is outside.

If you have a manifold mesh and it has no self-intersections, making normals consistent and pointing out (ctrl+N) works every time without a fault. If it doesn’t work, you can be certain there’s a problem with the mesh.