Broken UV on Sword Blade with Bevel on

So, I am a newbie when it comes to 3D modeling and have been following a tutorial about the basics of how to use it and get more proficient at it… Recently, though, when I was trying to lay out the UV on the blade it would end up breaking, but only when bevel is on and above subdivision surface (don’t fully know if that is the correct term for that). Once the bevel is turned off, the UV fixes itself and looks good again. In order to combat that, I threw in a bunch of loop cuts on the blade, after duplicating it, and that fixed it, but I’m pretty confident that’s not a good fix for it. This is also my first post on here, so I don’t know if this is the right category for it or not. Sorry for the long winded message, I’ll be including an image of it as well. 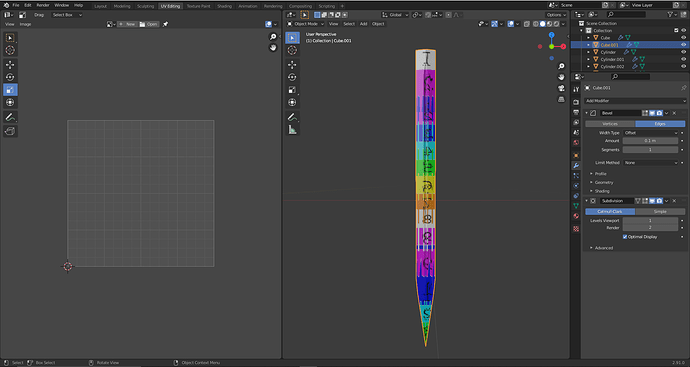 That is a good fix for it. In general once you’re working with UVs you have to take care about changing the topology of your model.

Bevel modifier creates (extrudes) new geometry, for which it cannot reliably (re-)construct UVs. Generative modifiers, by and large, don’t preserve UVs - they either warp existing ones (like subsurf) or create new ones with arbitrary values when generating new geometry.

BTW, UV work, for the most part, should usually go into the Modeling section (to which I’ve moved this topic), unless you’re specifically working on texturing, in which case it likely should be in Materials and Textures.

Thank you so much! I didn’t really know if that was the right thing to do or not. I haven’t really gone and learned much about UVs yet, do you know of any videos or sites that do a good job explaining UVs? Cause I would like to learn more in depth about it.

Also, thanks for moving it to where it should be. I’ll keep it in mind that UV work will go into the Modeling section.

There’s some good info about UVs in general over at polycount. I don’t know of any in-depth tutorials regarding UVs specifically in Blender though.

Thank you! I’ll take a look at polycount.

Yeah, hi, the thing bout UV is that it is so intrecit. Any remodeling done could have a big change on the maps. I’d say for ya sword, seams should be on the sharp edges (you know, the ones that cuts things) and on the edge of the blade meeting point with the… Thing… You hold the sword with.