The annotation stroke seems to fail to snap to surface while in edit mode. If I am in edit mode on the “Mesh of Bsurface” with vertices selected and try to draw on the surface of the mesh it fails and draws in screen space. There is a workaround in which I have to change modes from edit to object. This is the only time I can draw on the surface of the mesh it seems in object mode. Then I select the “Mesh of Bsurface” again, enter edit mode, select the vetices that I want my strokes to connect to and finally “Add Surface”. This seems to work. Is there a setting I am missing to be able to draw on the mesh while in edit mode or is this an unresolved bug?

This is a known issue with the version of Blender you have.
Upgrade to a newer Blender or an older one.

Hey. Congrats on the addon.

I find it very useful for modeling from curves.

After initializing an bsurface object, picking the bezier curve set and adding a surface, the original curve set is destroyed and replaced by an empty object with the shrink wrap modifier. If you change the Cross or Follow amount in the lower-left panel, the curve set comes back.

It should not destroy the curves in the first place, as the “Keep strokes” option, sucks for bezier curves.

The bahaviour can be seen here also:

on time stamp 0:59-1:05. Pay attention to the hierarchy, and you will see the original bezier curves come back, after changing the Cross or Follow setting. They should not be destroyed in the first place I think…

===============
Another thing is…how hard would it be, to add a feature, where we could retain the control of the mesh with the curves? By what I mean is, to have the possibility of actively shifting around the curves to have an realtime preview of the mesh, like in a loft procedure.

If way out of scope, would it be possible, for a “ReSurface” option? Where after changing the curves a little bit, the original added mesh would be cleared, and created again based on the adjusted curves? I know it can be done, by deleting the object and “Add Surface”, again, but a ReSurface option would ease the pain a little bit.

Is there a way to not add the material when creatin a bsurface mesh? Fixing bug: new patches, made with cross-hatching are shifted, if origin not in the center of world.

Is Bsurfaces addon can to generate altitudes curves/a Contour line of 3D terrain ?

Found a bug, mini panel resets offset and color
Steps to reproduce:
1.Initiliaze on default cube
2. Draw 2 lines and add Surface
3. Change color and or offset
4. Open mini panel and increase cross amount by one and back.
5. Color will reset to red as well as the offset will reset back to 0

I’m using Bsurfaces to make a land surface from contours imported with dxf import from cad file and it works perfectly. The imported contours (polylines in dxf format) were already on the appropriate height in cad and became one object on import, consisting of one spline per contour.
In order for the Bsurfaces to work properly, the splines had to be

1 and 2 can be done natively in Blender, easy enough. To order the splines @cwolf3d suggested loading another add-on he maintains, built into Blender releases, called Curve Tools add-on.
The Utilities section has a Spline Order. You need to turn it on. It will show the serial numbers of the splines (the number is located at the starting point of the spline), then select the desired spline or one point on the spline and use the arrow buttons (’<’, ‘>’) on the panel to change the order.
Also in the utilities are tools to perform 1 and 2, if you are unfamiliar with Blender native for the tasks.

This worked like a gem and completed the workflow to get a land relief from CAD contours.

It takes a while, resetting the order manually with the utils mentioned above, with 20 contours and I could have many more on a large plot. Is it possible to use a stroke or curve to show order?

Does the function [Reorder Strokes], under the Bsurfaces menu, work? How? I cannot get it working. 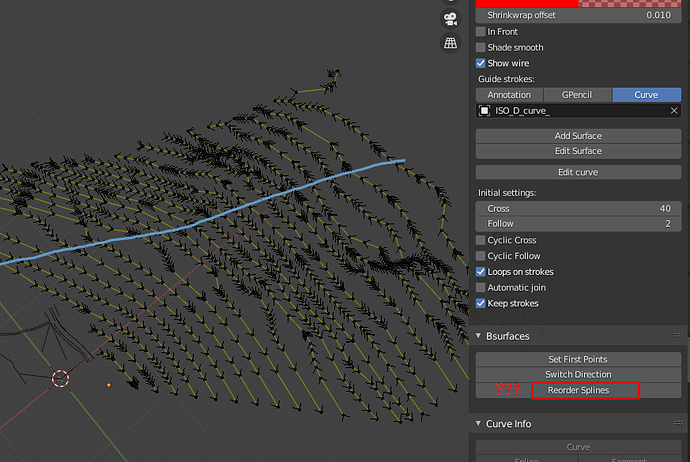