Hi guys,
I’m planning to update my pc, but right now I haven’t enough money so I think I’ll go in the middle 2015.
I took a look in the web and if I buy a new pc now, I buy a AMD FX 8350, mobo Gigabyte GA-990FXA-UD3, SSD Samsung 840 Evo 120Gb and I wanna keep my PSU Thermaltake Lightpower 430W, EVGA GTX 660 Ti 980Mhz, HDD Seagate 500 GB and
Windows 8.1Pro
My question are: this hardware will long for the next years or I should choose an another CPU, an another mobo…?
I have to change my PSU: I went to Coolermaster.outervision.com and this was the result 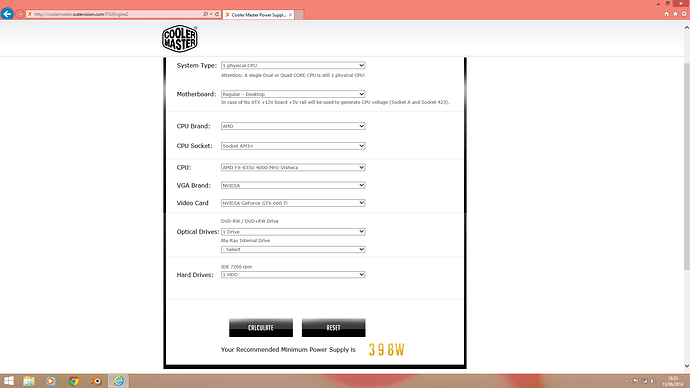 you should search your computer parts in the exact moment you are going to buid it, there is an eternity of time betwen now and midle 2015(at least in pc parts time) so just wait until you have the money and then look for the best deal

wait… and save up…

I doubt that 430W is enough power to run the system you have listed (look up the minimum power supply for the 660gtx). Get at least a 600W or better.

Try to choose an intel i7 based system instead of AMD.

Yeah, don’t even bother looking at parts now. Wait until you’re ready to buy, you’ll be able to get much better parts at the same cost.