So here is my work in progress for the Blender World Cup. My piece is called “Civilian Monolith Encounter”. Since the topic of this challenge is about a very special moment in time, I wanted to incorporate something that represents a vastly important turning point. And what better way to illustrate this point in time with the Monolith from “2001: A space odyssey”.

Instead of discovering the monolith on the Moon or on Jupiter, I decided to play on the plot a little and place the monolith on a highway overpass (in the not to far future?). I began creating concept sketches of what I wanted to include in the scene. So I decided to include a rather large truck in the scene with the truck driver getting out of his vehicle to inspect the object. Here is a loose detailed view of the front profile of the truck This is a more detailed concept sketch of the scene layout and the drivers profiles. And at the bottom, there is a quick thumbnail of what I want to go in the background And this last concept sketch is further detail into the background. Super large overpass structures are going to play a key roll in this image in the scene that it will be “focusing” the viewers attention to the materials in the foreground via straight lines. Wow, u really thought this through. That’s smart, I wish more people would do this. Best of luck and ill be keepin my eye on this project

So the project begins!
To start things off, I start with the wheels of the truck and work outward from there. than I build up the cladding and bumper-work from the ground up. And than I attached the cab to the frame! I think this is going to turn out to be an award winning finished product - no pressure to you! Keep it up!

The truck modeling continues!
Finalizing the overall shape of the truck for my project. 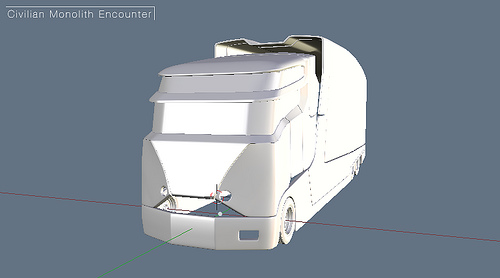 Now added much details and interior A more detailed view of the door mechanism and dashboard 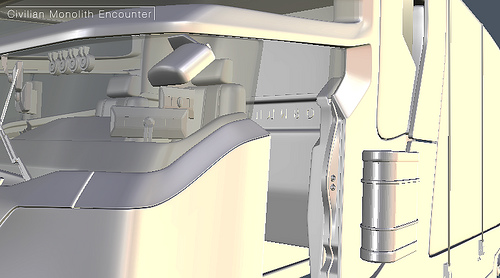 And a Blender Rendering of the machine; 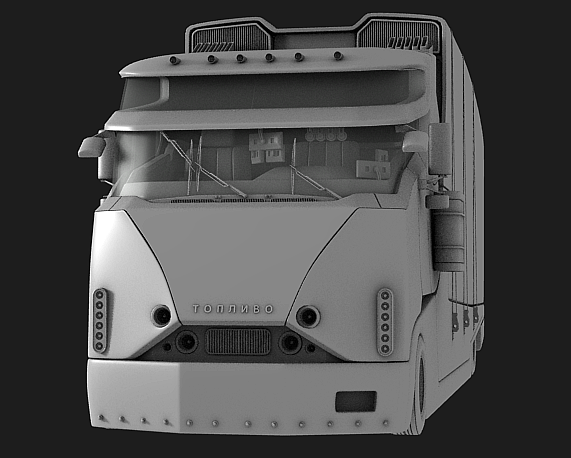 Next up is road development (infrastructure).

wow very nice, can’t wait to see it all done. keep it up.

PS: I like the theme you are using in Blender.

Excellent so far!
It looks like you don’t fear high poly counts…

If you get a chance to read the book by the co-Screenwriter, I think his name is Clarke
if i remember well, it is much more self explanatory than the movie.

btw, 2001 was written by Arthur C. Clarke. And adapted into film by Kubrick who modified a few things in the story. But the original is mostly Clarke with some suggestion by Kubrick. after the movie, Clarke went on and wrote different novels which follows the movie (2010, 2061 and 3001).

oh and the point was simple…we, mere, human, will always face things we don’t fully comprehend. The block itself is a monolith created by some higher species which are unknown and who gave themselves the mission of helping intelligent life evolve into greater being. We human, are part of that experiment (hence the man-ape at the beginning of the story, slowly learning new tricks from the monolith). The different books also goes so far as to say, no one is perfect and will ever be, even the higher intelligence who ‘helped’ us…because they definitly fucked up somewhere looking at what we are as an ‘intelligent’ specie.

So now I have roadwork progress to share:
The image below is of the starting road segment before I go off and replicate things. (the building block)

This image is of the road (asphalt portion) where the paint and light reflectors sit. As you notice it is currently completely flat

Now using a handy road construction technique, Lattice! to bend the components into the desired shapes.

And here is the more final result of the main road component with the Lattice in action. This is the mock up position of where the camera is going to sit in the final result.

Trucker man and Truck texturing up next!

Wow. I wish I could model like that. How long did it take you?

Awesome work so far. Your sketch skills are great too btw. :eek:

good…really. That truck has got me hooked! Just as a random thought, wondering what it’s insurance premium might come out to be.

some sprinkles of new material :

this image is assembling the overpass panels/structure above the subject

and this image is merging the components together for the final composition!

I wish I had shoes like these in real life, I would be just a little bit stylish 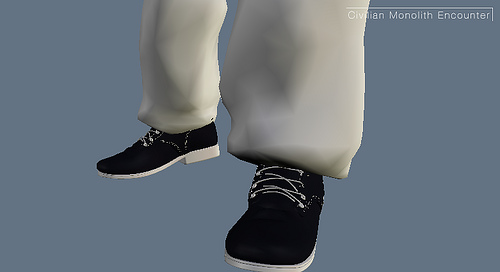 I dunno how I missed this thread til now, but OMFG

just awesome, this is going to be amazing when it’s finished

awesome, did you use arrays with 2-rail sweep for the road? the driver is pretty cool but his elbows look like drinking straws and his arms may be a little short. you appear to work really really really (really) fast… I’m astounded.