I threw this together in a few days and it just seem wrong still, it’s just not a very pleasing image. If anyone has any suggestions that would be greatly appreciated. 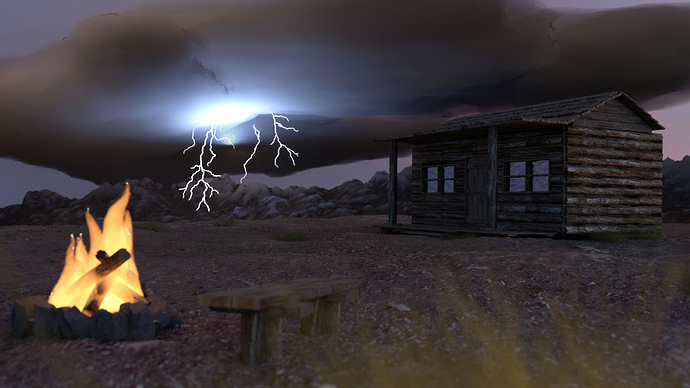 Clouds are very unrealistic. I suggest to rid them off. With newest Blender you can improve fire quality thanks to volumetrics.

Thanks i’ll try that.

You should try to find tutorials on clouds, lightning and fire effects that you could use here to make them more realistic and detailed. Rain could also fit the scene and some puddles of water on the ground would look nice as well.

Ground although not just boring flat looks too uneven, barren and random. Supposedly if the cabin owner chose to clear the area of vegetation and rocks he also wanted it more flat and biggest crevices filled out so he could use it somehow. So put something there. Fill it with natural stuff, rocks and occasional hay strands and perhaps make a more barren and even road that leads to the cabin and a path from cabin fire area.

As a composition the image still has lots of empty space right in the middle which causes some unease in the viewer. You could bring the cabin a bit closer and add some props on the yard to fill out the scene.

Oh Kheetor brought the heat! haha
Dude your awesome, thanks for spending the time to give it some thought. Your post helps tremendously.