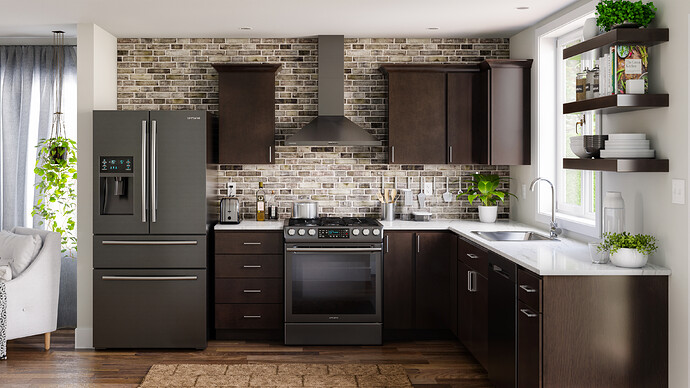 Latest project to show various finishes in one kitchen with nothing but the finish changing. 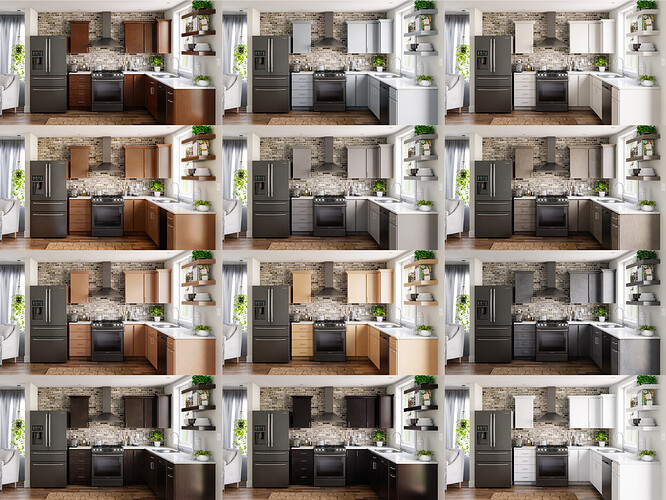 Hey, Very nice - if the client/customer can’t make a decision then they just need to move.

Thanks! This is actually for a website, so when the user clicks on a door style, they can see every finish we offer for that door in a slideshow. All the same kitchen to keep it clean and from being time consuming to make.

Thanks! I’m continually trying to improve, and this project was a step forward for me. When I compare to the first kitchen I made, it has come a long way…

Well I’m sold - and I’m the person who would be doing the job, wish I had you for my last job - people who are very undecided really urk me.

One of the things I learned how to do on this project, though it is still a bit cumbersome and sometimes I have to give Blender a shake to get it to work, is to use one video card to render while I used my other video card to run the viewport/rendered preview (cycles) in another instance of blender. So the high quality render (1500 samples @ 5760x3240px - I like to downsample my renders, they just look better to me that way) could run in the background on a card with no monitors, while still loading full scenes on my other card (which has three monitors) and setting up the new texturing, color etc with no slowdowns at all. This was a huge improvement and time saver over my old way which used the same card/s to render and display the viewport rendered view which made working while doing a render very difficult.

Downsampling seems to be the only way to (partially) fix denoiser artifacts. It gives better results compared to increasing samples.

Did you use any render layer tricks or was each frame a full render of the whole scene?

I have found that the images do look better with larger size/lower sample than higher sample smaller size. Especially if there any fine details or small objects. For example, in my experience, taking a 4K or larger image down to 1080p has much more detail to me than rendering a super high sample count on an actual 1080 render. The details just get lost. I have been using some pretty high sample counts on these simply because I need very little denoising artifacts when the animation is switching frames. I want only the colors to change, not blotchy shifts which tends to happen on some lower sample counts. I also have my light bounces set to 32 pretty much across the board. There isn’t a whole lot of change than lower but it did seem to help a little.

I didn’t do any tricks on this one. It was all rendered as one scene and post processed in photoshop. I’m sure there is probably a better way to do it, but I’m a bit clunky yet when it comes to scenes and render layers. I would like to set up my outside environment on one scene and my interior on another with it combined in the compositor so that I can have a fly through and not blow my vram. This scene is actually an entire house with matching cabinetry in several other rooms and the entire house is furnished, so it’s a bit heavy on the memory usage. The outside is also 3d to get depth and movement where the camera can see out the windows.

I think future denoisers will receive each sample’s value as well as its sub-pixel coordinate. This way higher-res+lower-samples trick will not be needed.

I am surprised not many people are talking about this. Do they all use renderfarms and use 3000+ samples?

That would definitely be great for animations to avoid flicker and blotchiness. I am not sure how most people operate, I suppose if it is studio they would have their own small render farm or use an online one. In my case, I just have a single computer so I try for the compromise rout on a regular animation - 400 samples in 4k downsampled to 1080p (2-3 minutes render time per frame) usually makes it without too much distraction in the flickering. But that is for regular video. This particular project is just stills in a slide show, so I could handle 55 minute render times per frame for better quality - particularly since it rendered while I was able to work on new variations on my other video card. It will still take a long time as there will eventually be 115 different variations of this kitchen between door styles and color, but the slide shows will be grouped by door style or color, not all together.