Hey guys! its been a while since I have been active here. Lots have happened recently and lets just say I want to come back to what I loved doing!

I will be posting a creation of some kind on this thread each day along with some sort of learning material I read/watched regarding Blender/3D Designing/Modelling/VFX.

I’d love it if you guys could leave some moral support and motivation to keep this going and hopefully with some persistence and self-discipline, have a sketchbook of 365 models and materials that might be able to help others looking to learn.

Soooo… 4 pm my time (central). But it’s been days! Lol! Looking forward to keeping morale up! Do it!!

Just what I was thinking, Xraygunner

Haha, I was planning on starting it today. I had my exam yesterday and got an A so had a little celebration! The first entry will be tonight!

No worries here, just bustin’ chops! It’s the least I can do.

So today I decided to re-familiarize myself with the Blender layout and systems by doing a simple track with some cycles rendering. The result is as expected for my first render in a year or so.

I really wanted to mask the model behind the wooden fence for a more immersive feel but due to a bad track I couldn’t really achieve that, I also had some trouble with cycles shadow projection. Whenever I tried to output the shadow channel from a render layer in the Node Editor, there would be no shadow data and it would be entirely black. I had to perform a strange work around which gave me the weird looking shadows. If you know a way to fix this, I’d appreciate it if you replied!

Tomorrow’s project will be similar/the same as today but with the aforementioned changes made, feel free to leave feedback and criticism!

For today’s project I decided to expand on my previous track and render and try out a new method for tracking whilst exploring more realistic lighting and materials! I think the result looks great (Bar the mistakenly place light plane)

Things I could have done better:
More Time Spent on Setting Up The Lighting
Removing The Obvious Light Plane
Start Render Earlier for better quality

I’d appreciate any feedback and criticism! 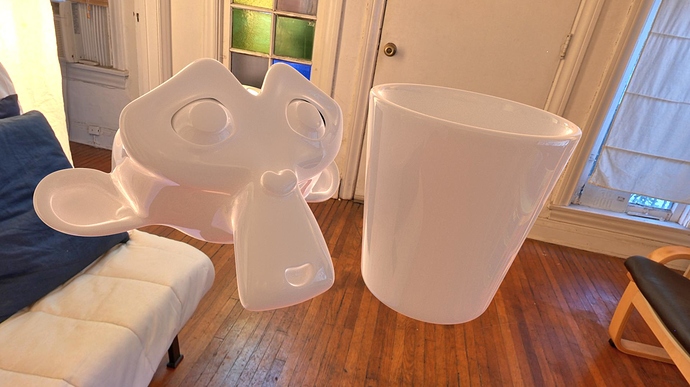 I decided to explore cycles materials more and spent allot of time learning about how I can manipulate the node editor to achieve realistic materials, the above material is a ceramic cup.

Things I learned:
Advanced Use of The Node Editor Within Cycles
Duplicating Real-World Material Behaviors in Cycles

Things I could have done better:
Spent More Time Refining The Material
Make Multiple Materials
Put Them Into a Tracking Scene

Looking good!.. So, in the second track, did you just use planar tracking of the paper on the desk?

Looking good!.. So, in the second track, did you just use planar tracking of the paper on the desk?

I used regular point tracks for it, although now I look back I could have used planar tracking for it! The reason I haven’t posted over the last few days is because I’ve been pretty busy, I’m considering changing this daily sketchbook into weekly projects so I can actually consistently upload!

No judging here! I’d be pretty happy to have accomplished what you did here in a year!