Hoping once again you can all come to the rescue and help me as always!

I’ve seen this problem before and somehow fixed it but it seems that was a fluke. The below image is a crop of a curtain close up in a living room scene I’m doing. As you can see, some of the right hand side renders blocky as if smooth shading isn’t on. 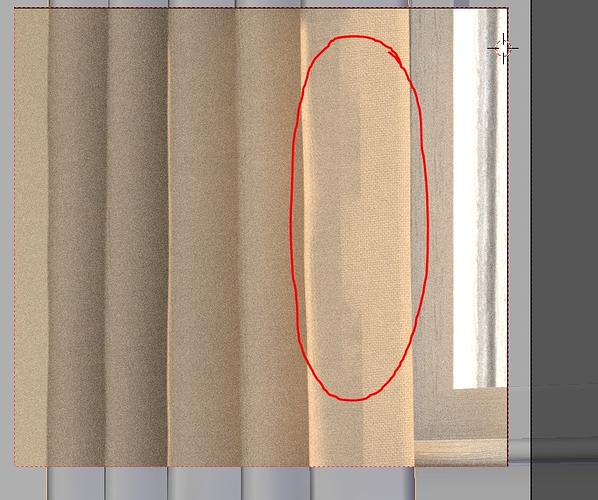 I previously had this happen on a subsurf model and changed it to multires and it went away. But this is not subsurfed anyway so I think that was just lucky.

I remembered something to do with the normal map causing it before so I disconnected the node for it and it goes away, but then obviously I have no normal.

Anyone got a clue why this happens?

Possibly a terminator artifact? (raytraced shadows have to follow the real surface, not the smoothed normal). Try subdividing it a bit, see if that fixes it.

Cheers, I’ll give that a try. It’s just the fact it isn’t happening anywhere else in the image or even that object. It was subdivided once already from the base mesh so not keen on doing it again but if I have to I have to. My VRAM is sitting at 2002MB when rendering in Cycles now so anymore and I’ll max out my 2GB card if I’m not careful.