What a beautiful and inspiring metaphor and comment, DNorman.
Thank you very much, I truly appreciate it.

By the way…I was also a kid…about…eh…40 years ago. Ha, ha, ha.
Looks like we are ‘generation-brothers’.

You are welcome, I admire the fact that you have an ambitious goal and go for it head on.
I have the tendency to model things with no real goal apart from the satisfaction of doing it and I hardly ever get round to completing an entire scene. You are not only completing scenes, you are making an entire film! That is why your work impressed me so much.

Hi JollyJumper. This thread is amazing!

You haven’t said too much about audio yet - music, sound effects, dialog, etc.

I am mainly curious about dialog. Will this be accomplished with real actors or will your character models also speak?

BTW, I was glad to see that someone other than me uses MakeHuman! I tried to download Daz, but it was a nightmare - so I gave up.

Actually the movie is shot with real actors. I ‘just’ do all the effect shots in Blender.
Unfortunately those effects shots now also include several drone shots, as we had technical issues with our drone footage. So I ended up with a lot more sfx shots than planned.
I only planned to do the creature shots and some CG backgrounds / set extensions.
Now…well…now I feel like I built half of Bangkok in Blender.

My character models are mainly scary creatures, which are a visual metaphor for the voices in the head of one of the main characters. So they don’t really ‘talk’.
The model of the lead actress was just a very rough, quick test. As a director I would be extremely tempted to have cg doubles of my talents, so I could ‘reshoot’ dream sequences or other additional shots with them. But I simply have too much other CG work to do.
So I had to skip that, unfortunately.

I think MakeHuman is great to create a quick base mesh. This can then easily be adapted and changed.
As you might have read, I did the basis of some of my animations in DAZ. This because I was totally new to CG, when I started all this work. And DAZ seemed easier to me than Blender. It felt more like an animated doll house, then a CG program. And at that time I could hardly model a cube in Blender. Ha, ha, ha. Now I would do it differently and animate everything in Blender, I think.
As there is little dialogue in the film, we will record all the voices in a sound studio and dub them. On set we just recorded a guide track. This way the audio quality will be perfect and it allowed us to move much faster during the principal shooting.

Sound effects and music are very important parts of the post work, still to be done. The music will be done by some great musician friends of mine, who already did several scores for movies and Netflix series. As the movie is supposed to be really unusual, the music or sound layer has to be really special as well. This will still need quite a bit of testing and brain storming.

Oh boy, again I wrote soooo much. And I’m not even a chatty guy. Honestly, I try to be the mysterious, quiet type in real life…

I try to be the mysterious, quite type

As I’m busy rendering CG scenes for my feature, I tried Quixel Bridge with the few free assets they offer.
Did a quick little test with them. And since I’m actually pretty happy with it, I thought I post it here…even though it has nothing at all to do with this topic.
Hey, if someone is allowed to go off-topic, it’s the OP, right?

This is all done with only 2 rock formations, one tree trunk and one rock texture. Dropped in a bit of Graswald moss, just for the fun of it, though.
Pity I don’t need such landscapes in my movie. I will surely look at Quixel closely for future projects, though. Their quality is impressive. Oh…that weird stone tower on the right is my doing. Don’t blame Quixel for it.

So now, I have to go back to rendering. Soon I’ll write about my experience with online rendering…especially with Tresorio Render Farm.

So, back on topic.

This time with a slightly different subject - particles.
I know that Blender’s particle system is not seen as the greatest invention since the creation of Eve… and will get replaced soon. Yet still, I’m almost ashamed to admit, I prefer it to Trapcode Particular on AfterEffects.
I feel like I have more control in Blender with all the different field weights, the input nodes and so on. I can adjust the camera and DOF much quicker. So after some initial tests with both systems I decided to do all the particle work for the intro sequence of my feature film in Blender.

Here’s one quick test with it… I use a reference picture for each scene in Blender, to set up the camera and particles.
Then I render out the particle animations on black and composite them into the live action footage in After Effects. This makes compositing in After Effects also quick & easy, since the particles are already rendered.

So much about this. Stay safe, my friends.

Unfortunately, I’m currently super busy with commercial jobs, so I hardly have time to work on my feature.
Here’s just a little test I squeezed in… a new creature design direction I was playing with…

Could be kind of interesting, too. But it needs quite a lot of polys.
Wouldn’t look forward to animate this on my macbook.

And I fear it’s too far off the masks we used in the live action shoot.
Oh well, still had to try… let’s see…

Time flies, my dear friends. Unfortunately the work on my feature doesn’t. Due to our little global pandemic I’m still more focused on commercial jobs. But here and there I manage to move the feature forwards. Baby steps only though.

So a new idea crawled into my mind - to sell some artworks, I did in the process of the production, as NFT’s. This might allow me to finance a little part of the post production and offer me more time to work on it.

Special renders, like this one of my jellyfish, deleted scenes and other artworks. 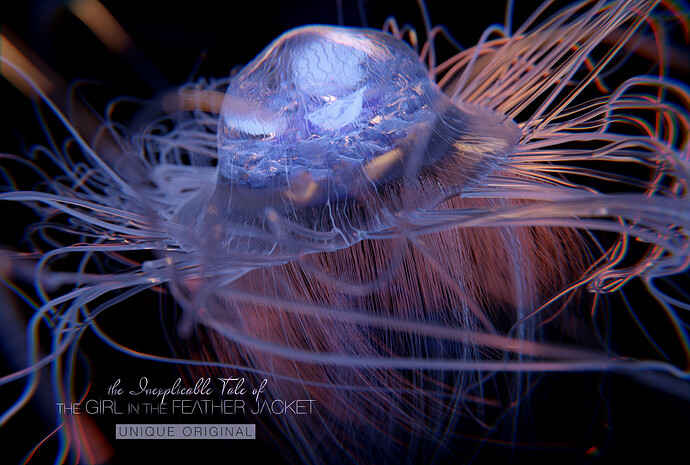 Special production files collectables.
Not sure if it would work. But it seems worth a try.

My main issue is, that interesting NFT marketplaces like Foundation.app demand personal invites from existing creators.
So if anyone could invite me to Foundation, I would be eternally grateful. It would be enormously appreciated.

And my eternal gratefulness lasts…at least a year!

Oh yeah, Photox I still bless you every day for helping me out with that baking issue!

I still haven’t read every post here but damn that’s amazing work you have done here. Keep it up, I really really hope that you will not give up and finish your film some day. I know myself how it’s sometimes hard to do project pretty much solo but don’t let it burden you!

Thanks very much Roman.

I promise, I won’t give up. Actually I couldn’t if I wanted to. There were too many other people involved in the shoot. They would kick my butt real hard, if I would give up.

But, yep - sometimes it’s really tough fighting through such a long project. Especially if you have new projects in your mind, you would like to start.

oh, thanks! appreciate it!
Waiting for your new posts!
Cheers!