All of the entries were great but I voted for DM9 since i liked the mood the image expresses.

Great entries everyone. Can’t wait to see who wins.

Great to see so many diverse entries again. - My vote went to beau11, you did a really nice job on the composition and landscape for this one.

@beau11 Did you make that landscape yourself and if so where did you learn how to make it since it looks awesome.

@beau11 Did you make that landscape yourself and if so where did you learn how to make it since it looks awesome.

Thank you! And yes I did make that landscape by myself for the most part. The grass was from the grass essentials by Andrew Price but other than that I distributed the particles and modeled and textured the rocks as well as the trees.

I recommend watching CG Geek tutorials and also Blender Guru of course, they’re very helpful when it comes to nature renders. Also I can’t submit this render without giving a shoutout to the amazing Grass Essentials and suggesting that you buy it. Its extremely helpful and the models are wonderful and easy to work with.

I loved this theme and all the entries. Some of them were especially amazing, and I hesitated a lot before giving my vote to purbosky. I just loved the world the render represents and the whole image gives a Playstation 2 vibe that I couldn’t resist. Oh, sweet sweet nostalgia.

Some entries were exceptional, like DM9’s entry or beau11’s entriy, but my second favorite goes to Frig! I just love the idea so much.

This part of the forum is so much fun! I just love it

Great entries as always from everyone.

This was a challenging challenge. I just ran out of time to finish what I had in my mind. The armor and weapons were all modeled new. The head is manuelbastioni lab generated. I had a few problems with blender crashing on me a few times and having to start modeling over. Don’t know why but the autosave did not save me. But this is closer to what I had in mind but still not even close. I wanted a lot more detail on the armor with flocks of birds around the head area and a space ship in the background. I also had a lot of problems trying to get an armature on the armor. I kept getting massive distortion in the mesh so gave up and rendered the at rest pose. Again not what I wanted but what I was able to manage in the time.

As others have mentioned great opportunity to learn new skills. 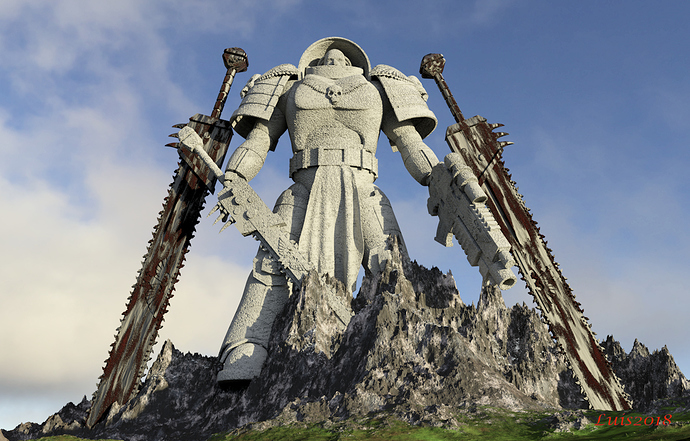 Thank You, I look into buying the Grass Essential pack. Also, the voting is getting pretty close beau11 is only a point away to tie with DM9.

I’m gonna make it even closer, my vote goes to Beau’s entry as well. Close call though!

Wow, that is very exciting. ^^ - But I can already say, there won´t be a loser here with that many votes for either entry. - Thank you everyone.

DM9: I really loved the lighting and colours here. That statue looks like some mean alien. Those two astronauts were a nice addition, giving the image not only a reference for scale, but also adding to the suspense of discovering such a statue.

RayVelcoro: I liked that little army of statues (is it based on those Chinese statues? Or was it Japanese?). DM9 already gave you some nice tips on how to improve it, so I’ll just mention one thing that I really liked: The brightness contrast on those poles in the bottom right.

fdo: It looks a bit like those archaeological findings, where you need a certain creativity to see a face in a mostly eroded stone. Also, the daylight is pretty nice.

kaidoe: I liked the blueish like and the fog. But I think the beam of light is a bit too homogeneous. I would expect some glow around it.

purbosky: This really looks like a screenshot from a game. The snake is really cool, and the little person in front of it added a nice tension to the image, as if they were confronting each other. Since you opted for a monochromatic scheme, some additional variation in saturation would be nice, like for example some gold strips somewhere.

Shenfara: I liked how you mixed modern statues with daily modern life. The cars look pretty cute, and even though I only see the feet of the statue, I can imagine it must be very big!

fcharr: I liked the face. The proportions remind me a bit of an ape, specially the big hands. Also, I find it quite curious how the ladders are placed in a way that people need to walk a lot to reach the base

I just think you could’ve used some trick to hide the empty horizon. A simple wall, for example.

beau11: The density of the vegetation is quite impressive! Also, the way you distributed the flowers is considerably better now than in the first version. I also liked the story here. Who knows what the statue represented long ago, when it was built. Now it is only a ruin being swallowed by nature.

Munno101: Haha, despite the similarity, that house isn’t exactly blend in.

The stone heads are pretty cool, but they look a bit too identical. Well, except for the blue one.

Hondo: I suppose WIPs were not very popular those times! I liked how you cast the shadow precisely at the opening on the wall.

frig: Those statues look pretty cool. It reminds me a bit of one of the book covers of The Lord of the Rings (which featured a boat going through a river with one huge statue on each side). I just think the stone needs a bit more colour variation.

caz747: Those models are pretty nice, both of the guardian and of the ships. The materials are also quite nice. But the ships seem to be just hanging in mid air, as if from an invisible wire or something.

putr corps: Really liked the atmosphere and contrast on this one. I can almost feel the tension that the guy must be feeling!

BillyA: Those sphinxes look cool. The sand is also nice, but it is lacking some tracks behind the horse (and dust).

Helge: Very subtle. I did not notice the head at first, but coming from you, I just knew there had to be something hidden here! That rock material is pretty cool. And I suppose it must be a bit disgusting to sleep below the nose of a giant, but I guess it could be worse…

david.speer: I think you managed to give a nice feeling of low light, end of day scene without making it too dark. The little story is nice, too. I wonder how that guy is going to come down from there…

rawstar: I liked the face of the statue. It reminds of some African cultures. I just wonder what those grid lines are doing there.

RobertT: Really nice monochromatic image. I liked how the statues are made of rough shapes, yet they seem to have some kind of personality. I wonder whether they are fighting for the ringing, or helping each other in keeping both sides of the chasm “together”.

@Millani: Thanks a lot. And you are right, this probably is a rather dangerous spot for camping. (But it was dark and kind of funny - so I couldn’t resist.)

Millani thank you for your comments!

DM9 congrats on the well deserved victory! Your entry was spectacular and earned my vote!

Thank you and congratulations to you too, lots of votes going back and forth this time. It was quite exciting. ^^
Let´s see what the next challenge brings?

Millani, thanks for the comments.