Wow, no open entries this week. That is unusual.

Man didn’t finish in time XD. I was a few seconds late XD. well here it is 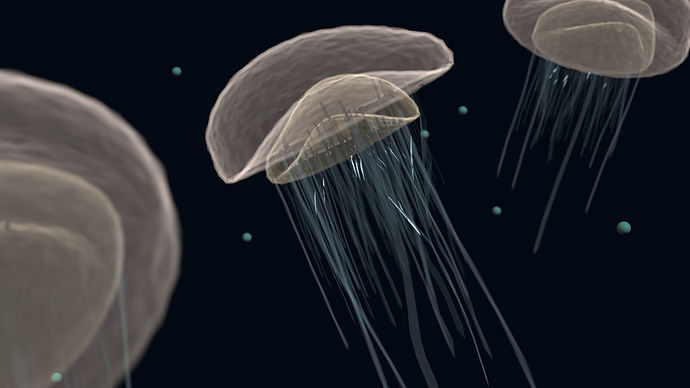 @Bunnyhog27 Sorry to hear that. I know the feeling…

Many great entries as always. :yes:

Mo vote went to joshwinkler3d. I love the beauty of the entry, especially the lighting. It feels very natural, and I can really sense the size of whale.

@Bunnyhog27 Sorry to hear that. I know the feeling…

Many great entries as always. :yes:.

Considering that very hard theme from a technical point:)
I’m voted for Iridesium there’s lots of details,atmospheric lighting and composition as a whole.

Miatpi, Love the style, very nice. You’ve got my vote.

@DanielJH You can get an interesting animation water moving effect.Did you try to animate water texture?

@str11 Are you asking how I made the water surface?
It’s an ocean modifier, with a hair system creating 1000 lights pointing up at the surface. The shader is just a doubled glossy shader (0.2 roughness) with a sky texture as color input. Nothing is animated. 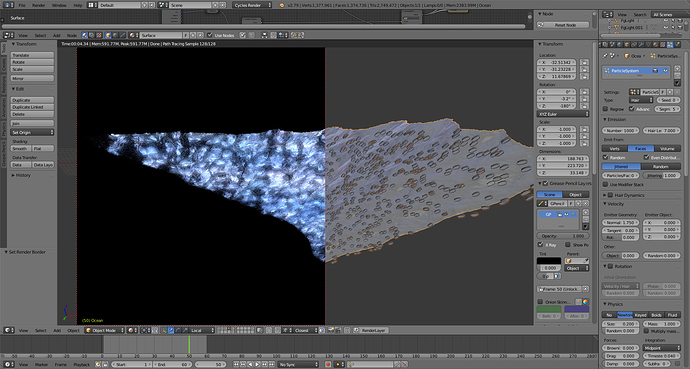 There were some really great entries this time. Even in the noncompeting list.

I voted for FlyingBanana. I really love the boat and the mysterious vibe you get from the image. Great work.
joshwinkler3d’s entry is very good as well. The image is very peaceful.

@DanielJH The ocean surface in your image is exceptionally well done. I like it.

I voted for joshwinkler3d, render is beautiful!!!

@Iridesium thanks for the vote. To be honest this is one of the few weekend challenges I felt somewhat good about by voting time. I am still considering continuing it more and posting in the wip section of the forum.

Went with beau11, i love the atmosphere!

Kinda reminds me of this:

Lots of good entries this! DanielJH, FlyingBanana, Joshwinkler3d, Miatpi, Iridesium to only name a few. My vote this week goes to FlyingBanana, I already liked the composition without the diver, but with that included it’s a telling story! Good job!

I don’t know who to vote for! D: Oh the pain! but…I think I’ll vote for Iridesium after all! The choice of colors and the overall composition is just amazing! My second favorite is FlyingBanana’s render which is simply amazing! I am so impressed and also so very saddened I can’t vote twice!

edit: Oh man Oh man Oh man! I can’t believe I forgot to speak about the other renders! They are amazing! Helge’s render in particular hit home for me! The non-competing are often my favorite works, I just don’t mention them cuz I can’t vote for them or just forget to like today!

Man I really didn’t have time to participate this week…I wish I could have! Especially since I don’t know how to make an underwater vibe! That would have been a great learning experience! If any of you guys could share how to get that vibe, I would really appreciate it!

Thank you for the kind words Shenfara and RayVelcoro glad to hear you liked it. Great entries all around, awesome job to everyone’s entries.

@Shenfara after the contest is over maybe I will post my final image with a breakdown in the FinishedProjects section for anyone who is curious. Thanks for voting on my entry.

Getting the underwater look isn’t as complex as you might think. Just know, there is lots of ‘stuff’ just floating around everywhere. That and the blue color

@oJB thanks for the vote. I had a lot of fun on this contest!

great entry’s, I love how much different versions of this theme underwater here are. Here are so real cool watereffects, which are tricky and as far I understand not really easy to make.

to name a few. I love the book worm by Miatpi, really made me smile. Also great humor by diderv and his simpson like fish. beautiful organic models by josinkler3d and oJB.

I am exited for the next weekend challenge, this time I didn’t had much time so here is a little bit polished version of my entry (thanks for voting). 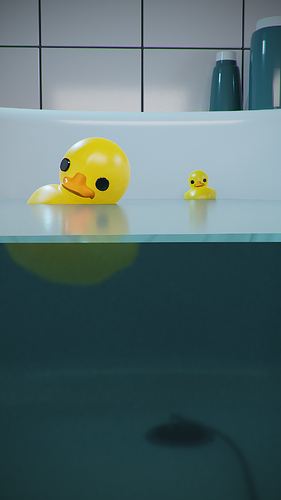 critique is welcome and tips for the water shader.
cheers.

@sayris: I might dig a little much into this, but you asked for critique, so…

Another thing that comes to mind is that the shader of the surface seems to lack a fresnel. May I guess you use a glosse shader? If so, try glass instead.

Now this might be a persional preference, but I think the “underwater part” look to dark in the newer version, as if it was dirty. It feels a lot more natural in the previous one.

One thing I want to adress that isn’t about the water is the lighting. It definitely look better in the second version, making more highlights and breaking up a sort of “flatness”.

Nevertheless I love your render (both of them). They are very well done, and I like the peacefull feeling of them.