The lair of the beast

My first thought if hear “Lair” 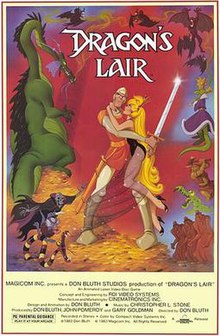 Dragon's Lair is an interactive film LaserDisc video game developed by Advanced Microcomputer Systems and published by Cinematronics in 1983, as the first game in the Dragon's Lair series. In the game, the protagonist Dirk the Daring is a knight attempting to rescue Princess Daphne from the evil dragon Singe who has locked the princess in the foul wizard Mordroc's castle. It featured animation by ex-Disney animator Don Bluth. Most other games of the era represented the character as a sprite, whi...

My first thought if hear “Lair”

So I’m not the only “old man” here

I even played it back then and it was my first laserdisc experience… It was pretty expensive back then and you got through it in about an hour.

Kremlin would also be a good choice for a “The lair of the beast”-Pic.

You’re not the only oldie here.

I remember mastering this game while on vacation… when I got back home, the console had just arrived in my hometown arcade, so no one had gotten all the way through it yet. There was a large crowd around me as I played, slaying the dragon, then walking away like a boss as the final cutscene played. Good times.

Kremlin would also be a good choice for a “The lair of the beast”-Pic.

Yeah, this morning as i saw the news, i imagine a little putin baby sitting on a Risk! Board throwing dice away. I didnt thought he is such an idiot. I really hope our government is shutting down north stream 1 too,
i dont care if the prices get higher or we get an shortage. If they bleed in ukraine we should be more solidary and can freeze a bit. Russion should be 100% financly isolated asap. Till the russion people remove him and leave the occupied areas. Freedom and democracy has to be paid in a way, and luckly we dont have to pay with blood for that.

I remember it in the arcades too. BUT I’M NOT OLD AM I?

“The Lair of the (Number of the) Beast” 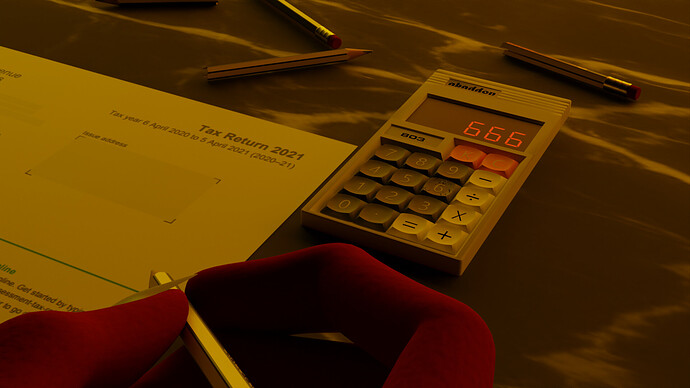 Pure. The tax return form was taken from the relevant website, but everything else was modeled today.
Not entirely happy with this, but I won’t have time to do anything better this weekend.

Just in case you’re interested, I’ll explain my thought process…
Tried to avoid the obvious caves, spider-webs etc. and was just going to model a calculator to be the Lair of the number of the beast. After modeling that, (based on an old abatron 803 calculator - because it lends its name nicely to a bit of wordplay) I wasn’t happy with just having a calculator, so I bulked out the scene a bit.

I remember that game…it took all my quarters! 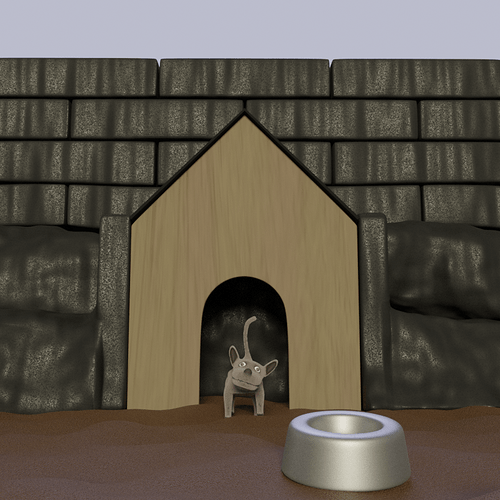 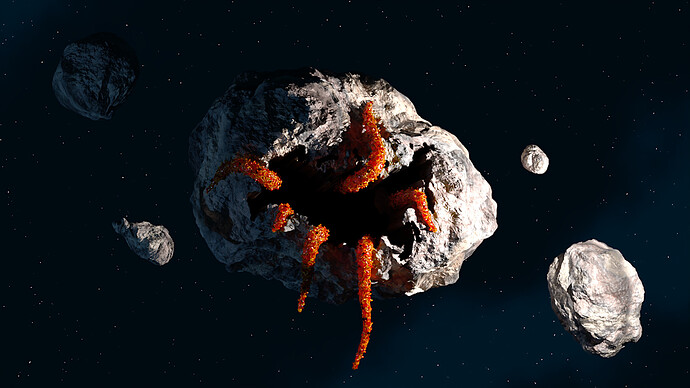 Cycles, 4096 samples, denoiser, ivy generator (built in), Graswald ($) and plate generator ($) [reason for not being totally pure], HDRI lighting from HDRI haven, everything else made today in about 5 hours.

The first AI controlled tank of its kind, it gained sentience almost immediately and figured out he didn’t like his masters too much. The program, named the beast, was a colossal failure and the Beast broke through the containment building speeding into the wild. With 3d printed ammunition built with material filtered from the available materials, fully charged solar powered batteries, and composite ablative armor, it waits for the search parties to fall into its trap. 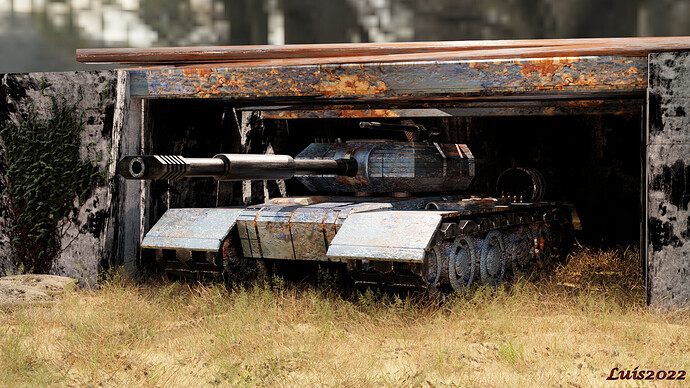 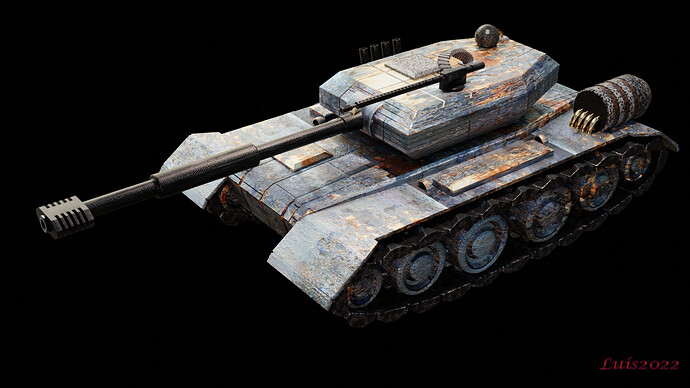 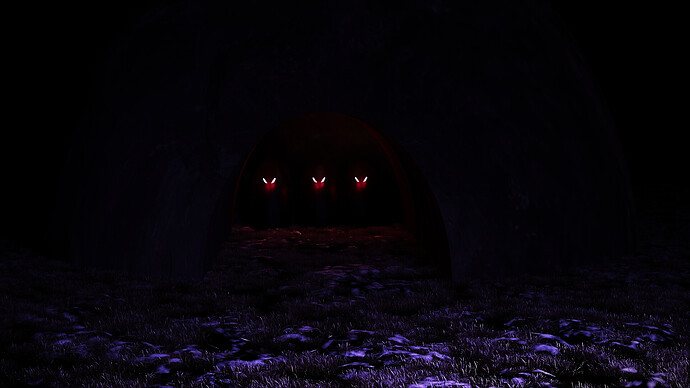 For me its is complete black except the eyes. Had to brighten up in gimp to see the cave and grass. 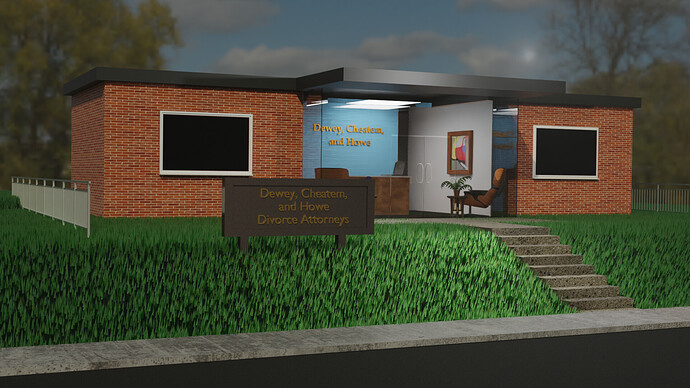 i tried to better it

No lair to hide
Open, cycles 2048 samples + optix denoiser, the snake is complete made in blender with modifiers and a combination of procedural shaders and uvmapping. The background are ripped from different sources and processed in gimp. So due to the heavy texture uses its open. 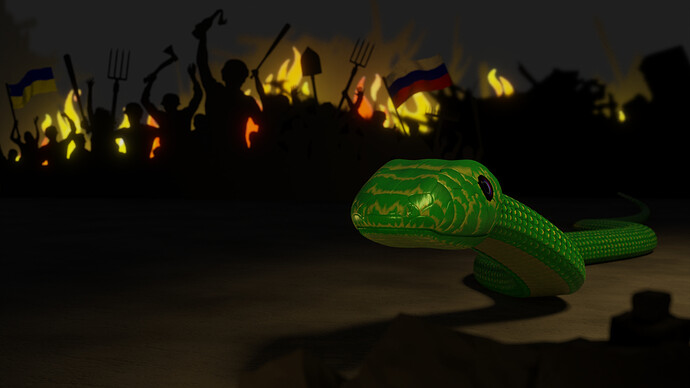 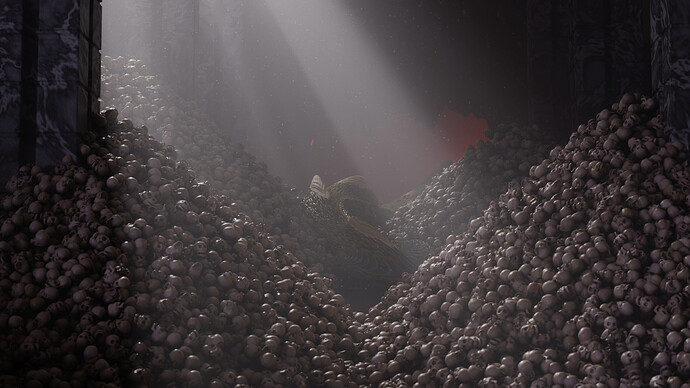 Pure - A bit of lighting is from an HDRI, everything else was built this weekend. The dragon’s tail is my first ever skinned model! It’s subdiv modelled and procedurally textured. Most of the cave is very simple modelling.

I sculpted a skull and made a shader to randomize the number of teeth on each instance (not the most important detail but it was fun to do!). The skulls are placed by a particle system with lots of children on cones, I tried using geonodes but they slowed blender’s viewport down a lot more than the particles.

The lights have a noise texture applied to give nice volumetric rays in the atmosphere, and there’s a dust particle system to add a bit more visual interest. I had to turn off the denoiser because the dust particles confused it.

The lair of the beast… 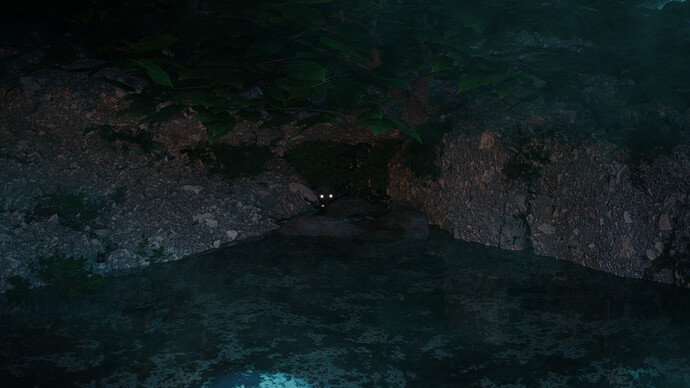 Pure, Floor texture from Polyhaven, (I think) compositing in blender, gif conversion in GIMP
Did the whole thing in about 2 hours because I’ve been busy finishing my Infinite Journeys submission. It’s definitely pretty simple but I’m happy with it.