Gifts for the Cryptid Lover

“There are two main goals for these contests: Fun and Glory.
Fun: You get only 4 days to create a cool image, based on the theme for the week.
Glory: After 2 days of voting, a winner is declared. The winner picks the theme for next week and will be featured in the Feature Row.”

lol. I had to look up what cryptid means. I was unfamiliar with the hardcore science of cryptozoology.

Just for fun, good time to introduce my legendary but never before seen mystic beast: The Texas cowboy dancing raccoon.

I made the model/animation for my wife’s Twitch channel this last week. Threw a hat on him and re-rendered for the pleasure to add him to the cryptologist list of unseen creatures. I was told he lives in my backyard somewhere along with the rattlesnakes, moccasins, beavers, deer, coyotes, river otters and Texas panthers. Okay the Texas panther may or may not exist but the rest do actually live in my part of Texas.

Mixamo animation on my models. 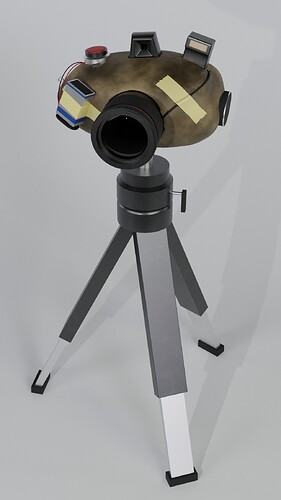 Toys for Girls and Boys 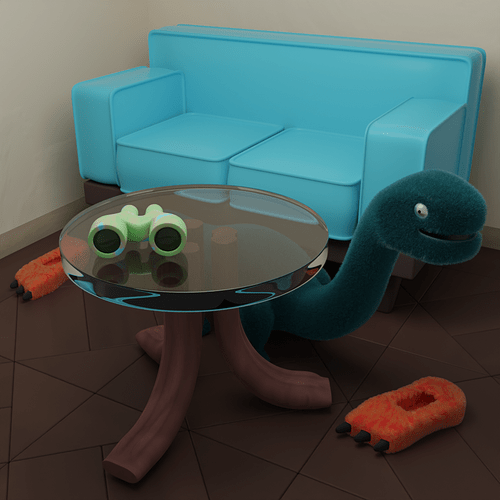 Cryptids are creatures like Bigfoot and the Yeti. Some claim to have seen them, but as there is no scientific proof, they are doubted by the mainstream sciences.
Another example is the kraken. Seamen say a giant kraken attacked their vessel… but is there a photo? No, except for the shots from potato cameras

In the Wiktionary, it says: “A creature known only from folklore or legend, the existence of which is not proven by scientific observation.”
Wikipedia also got a list of some cryptids.

Reportedly haunted locations: Cryptids are animals that cryptozoologists believe may exist somewhere in the wild, but are not believed to exist by mainstream science. Cryptozoology is a pseudoscience, which primarily looks at anecdotal stories, and other claims rejected by the scientific community. While biologists regularly identify new species following established scientific methodology, cryptozoologists focus on entities mentioned in the folklore record and rumor. Entities that may be c...

Contrary to popular belief the North American cousin of the Yeti is not the Sasquatch… it is the Abdominal Snowman. Rarely seen, since it usually hides in its cave, especially since getting Netflix. 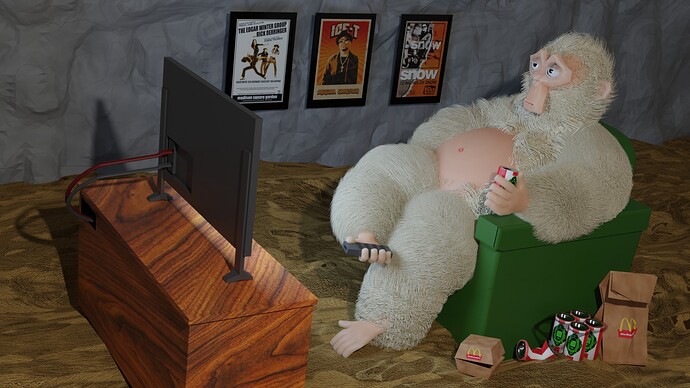 This would be pure, since there’s just the downloaded woodgrain image and the beer can wrapper made in MSPaint. However, I violated my purity pledge with the 3 music posters I downloaded - and the Golden Arches logo.

Jackalopes are an American South West indigenous species slightly related to the jack rabbit but also has some jaguar and chupacabra genes mixed in. Known to eat rattlesnakes for appetizers and feral hogs for the entree. One backpacker is said to have seen one but it was at sunset with bad light and didn’t have his camera ready. But he did say, “I saw it…for real!”, multiple times so it must be true.

Would have expected him to have a better six pack

He may not have a full six-pack, but… there’s probably a few more six-packs cooling in the snow outside the cave…

I know Bigfoot is portrayed as a big dumb idiot that likes ripping heads off of deer, but he’s probably a smelly narcissist aswell. 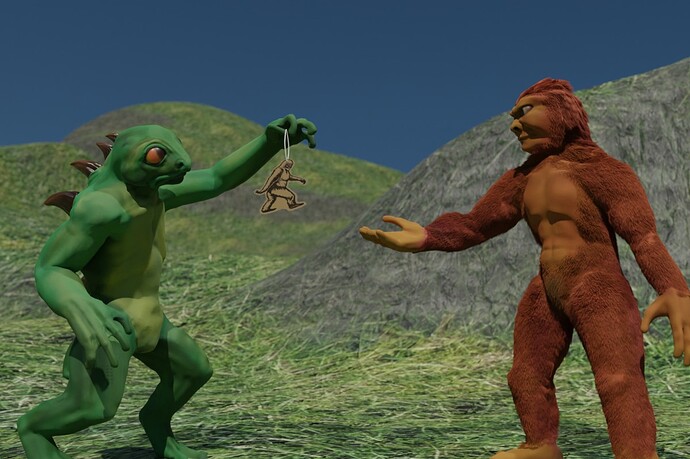 Pure entry, 3.2, cycles, rigify, the hero prop is an actual product from archie mcphee so props to them. 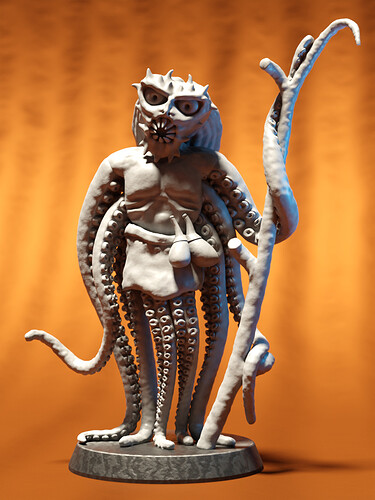 Crystal Gnome
Pure, cycles 1024 samples, opendenoiser, rendertime ~6min, all made in blender except the texture on the notice, used an hdri from https://polyhaven.com/a/blinds 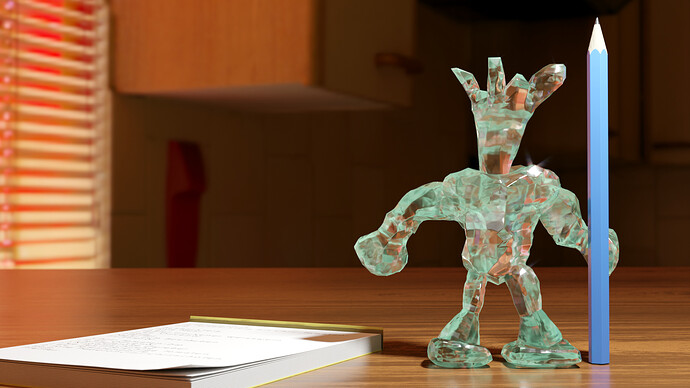 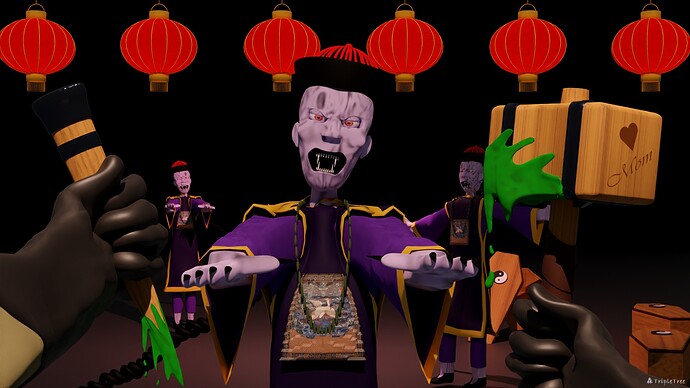 TripleTree - Jiangshi - Cryptid1920×1080 334 KB
Pure, Cycles
Jiangshi translates as “stiff corpse,” and it is a zombie/vampire-like creature.
Jiangshi are usually depicted wearing official robes of the Qing dynasty (1644-1912). They have pointy teeth and sharp claws. Due to their stiff corpse, they hop around instead of walking. These creatures also found their way into Japanese pop culture, known as Kyonshi. The old jiangshi Hong Kong movies of the 1980s are fun to watch, for instance, “Mr. Vampire” (1985).
6 Likes
Challenge #997 "Gifts for the Cryptid Lover" Voting CLOSED
valoisa_tylluan (Valoisa Tylluan) August 1, 2022, 6:04am #20

Nessie in a glass 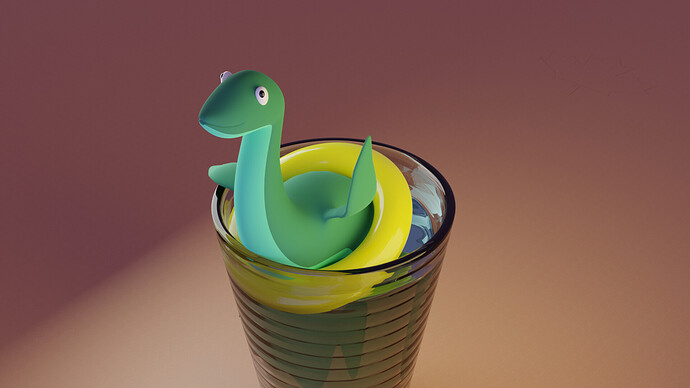 NessieInAGlass1920×1080 191 KB
Pure, cycles
Didn’t had that much time but I couldn’t let another challenge pass by

I tried to position Nessie with sculpting pose, but it kind of destroyed my model so I used an armature. Does anyone here every used the sculpting pose? Any idea how to properly use it?