Its appears that 2.8 has somewhat of a less useful connect vertex path tool. The old J key appears to not do much at all in a lot of situations that worked in previous versions.
This is a thing that has a checkbox option somewhere now to fix or is it a deliberate choice to change the functionality?
Rather unhelpful for manual retopo. 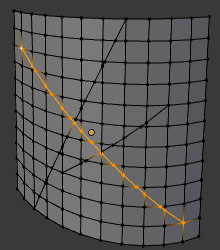 It’s not even registering that you actually selected the operator because the operator panel doesn’t show it as the last operator. So either it doesn’t get selected, or the selection is such that the two vertices aren’t linked in geometry and vertex connect wouldn’t find a path between the two.

Why it wouldn’t get selected, don’t know, but file -> load factory defaults is a thing to try in case old settings or addons mess with it.

Cheers guys. No joy on other option for resolving issue.
Continue to scratch my head I shall.

There are other things to try.

Always including an example .blend in the starting post when starting a thread being the first one.

After resetting to factory defaults, could also try setting the selection method in user preferences -> system to one of the two options instead of automatic.

Blender UI is drawn with OpenGL, could try running Blender without hardware acceleration and see if it’s graphics issue. For that, Blender needs a .dll from ftp://ftp.blender.org/sergey/softwaregl/ in its folder on Windows. Linux version comes with blender-softwaregl script which runs Blender without hw acceleration. It will be slow but if it works with that, there is a problem with the graphics drivers or its settings.

Could also save system-info.txt from Blender help menu and check if it uses its own Python instead of another version installed elsewhere.