The back of the head issue isn’t really much of an issue, as I don’t expect that part to be deformed. I’m just wondering how to redirect the flow of the loops. Oh, and I think I might have an issue with the nose as well, see the wireframes…

Please look at all the pictures, and comment on anything you see wrong.

Thanks for your time,
Randy 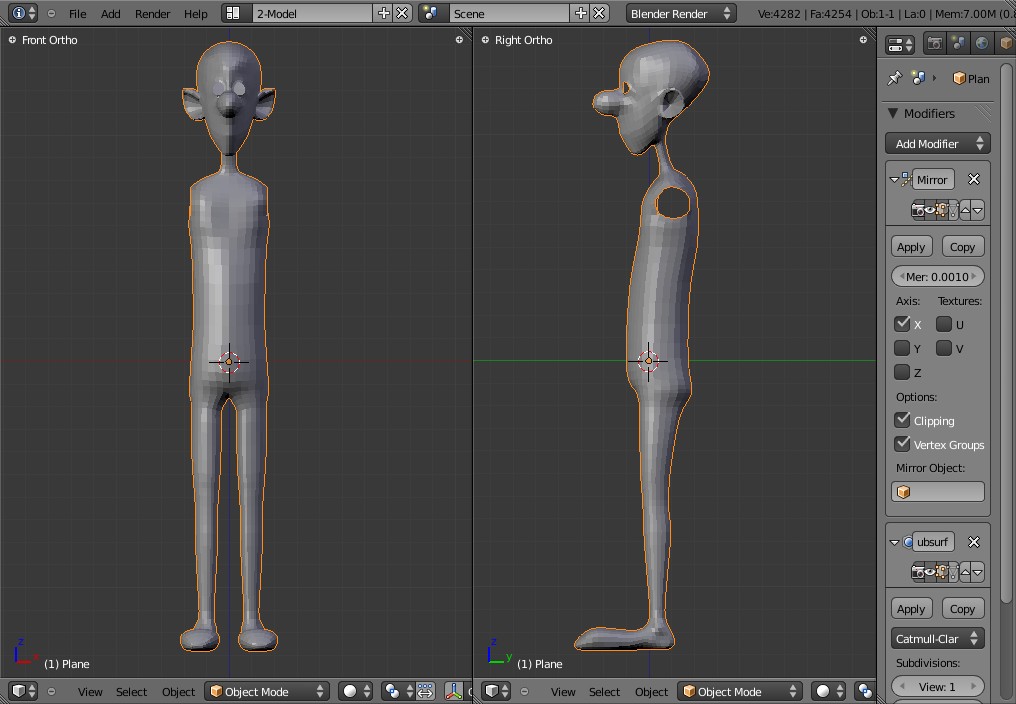 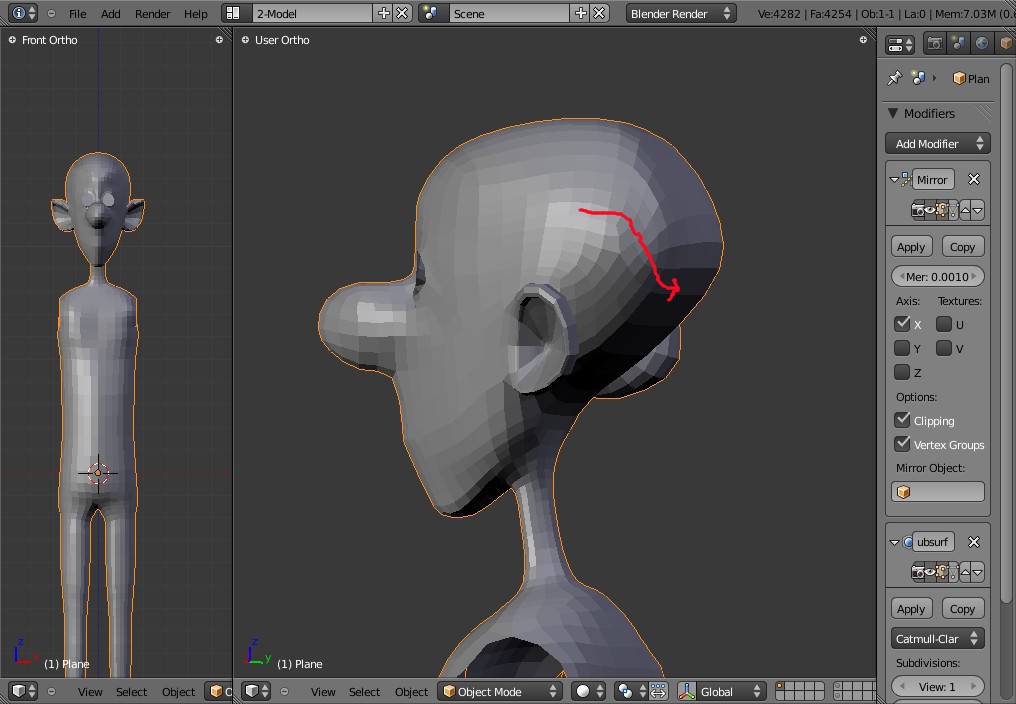 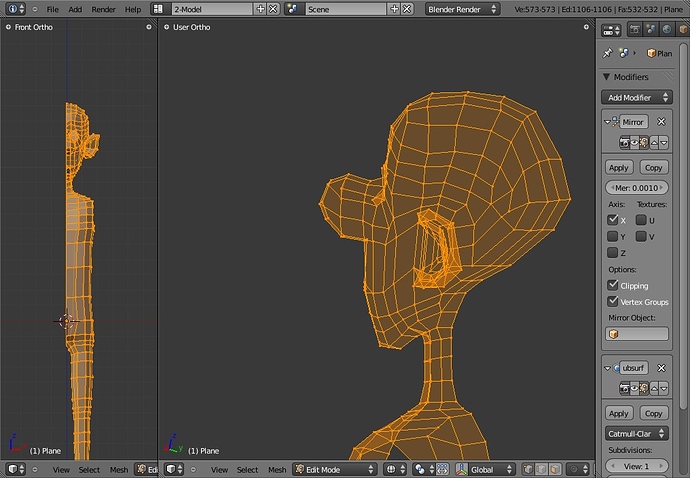 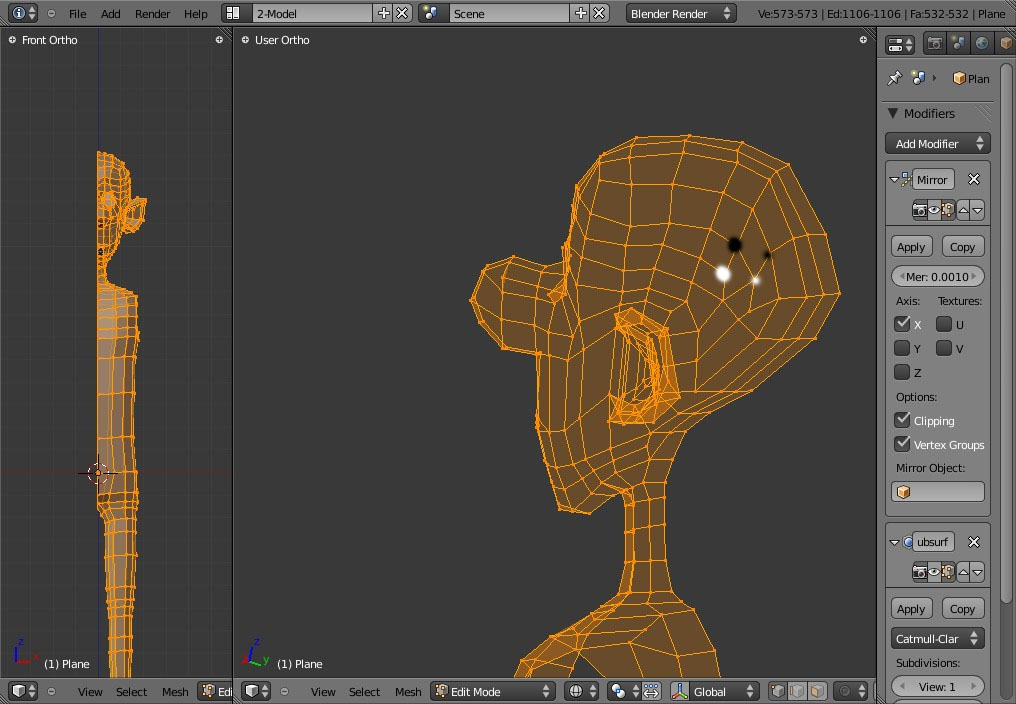 Thanks for the input tdietz87, I made the corrections you spoke of, but it only pushed the loop flow lower in the head, so I left it as is. I watched a video at blendercookie on head modeling/topology and it appears that the edge flow he had going on is the same as mine, so I’m not too concerned about it. After all, this part of the head won’t be deformed when animated.

I went on and did the shoulder area, struggled there, but think I have good topology for deformation there, but really the only part I question is the armpits. Another area I really struggled with was the hands. I had 6 vertices leading into the hand, but finally got enough to model all the fingers and the thumb.

So look over the screenshots and check out the topology. It all looks good to me, I am planning on animating it, so that’s why I’m concerned about topology. I don’t want to fix deformations with shapekeys or the mesh deform modifier. I want a good clean character, I’ll use shapekeys/mesh deform to correct as needed, but I want to avoid covering up bad modeling with these techinques.

Thanks for the time,
Randy 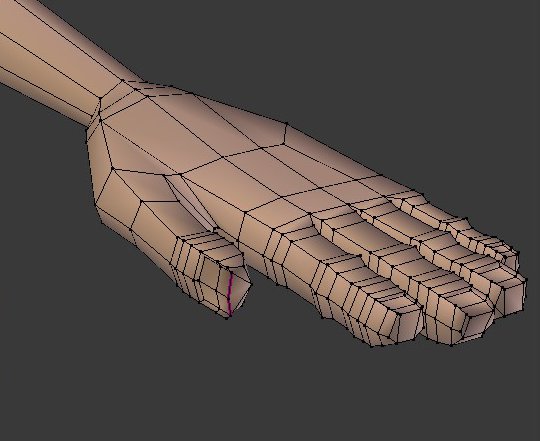 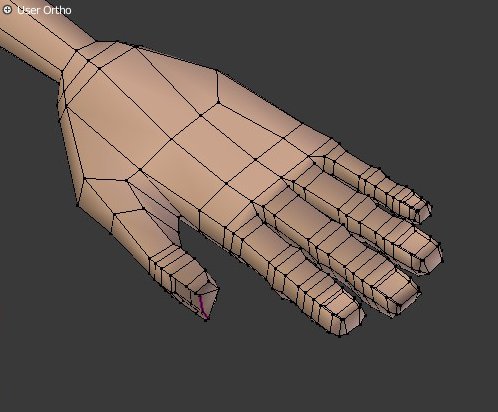 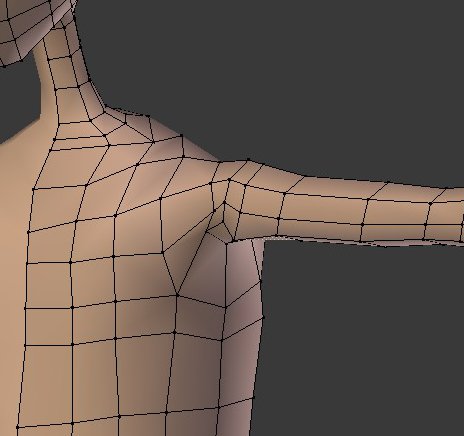 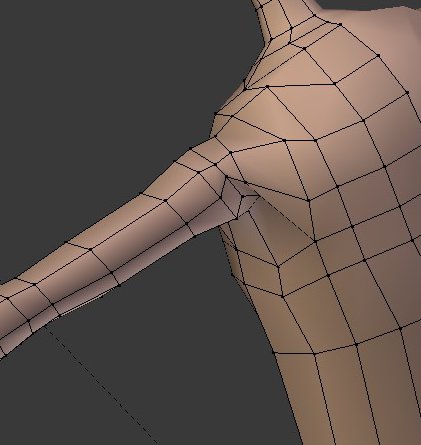 It looks like a cool character to do animation with. I think the legs are short though.

I loaded in a basic male reference picture as a background, and yes, the legs looked a little short. But compared to the reference pic, the whole torso is short, and the head too long. In the end, I did shorten the torso a bit and lengthen the legs. I think it will look better for animation. 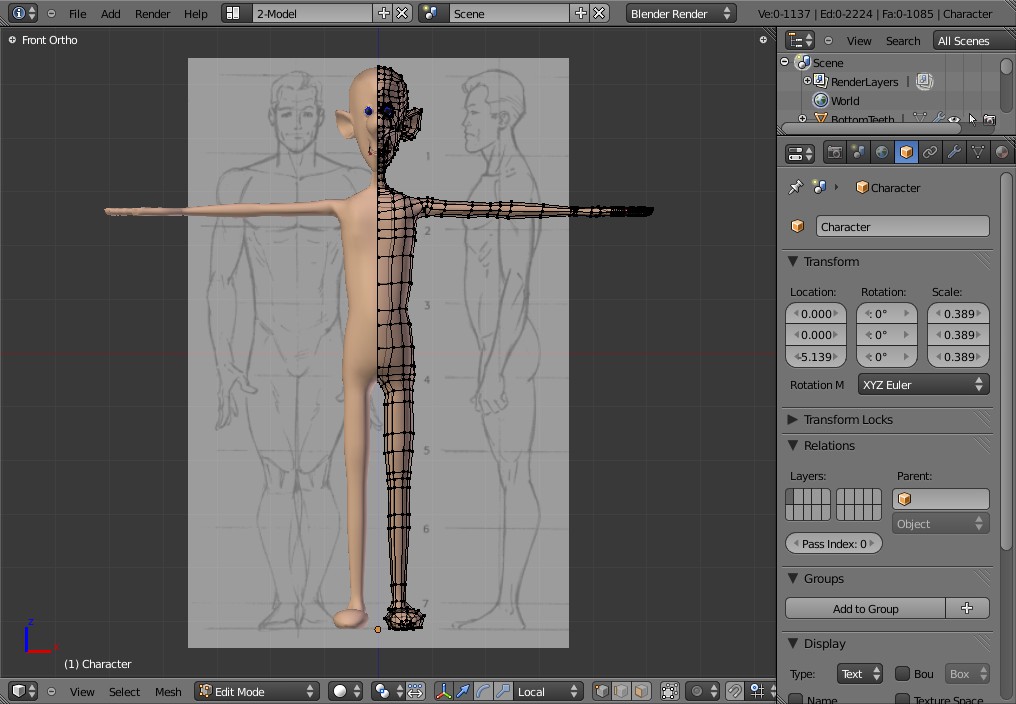 It looks like the proportions of your reference pic are off. He’s 7 and 1/3 heads tall instead of the usual 8… and that’s most likely because his head is too tall. Or more precisely, the angle of his jaw is too steep.

I’ve attached some good reference I photographed from the book Zbrush Digital Sculpting Human Anatomy (I know I could have scanned it but I’ve since formatted and that would mean installing the scanner right now, so no dice :p) Even if you don’t have Zbrush it’s worth getting for the reference pics, and discussion of modeling the figure in 3D. There are some sample chapters you can check out in that link.

Of course, since your character is so cartoony the proportions could be very wrong and still look ‘good’. It’s just a matter of what looks good to you

I also highly recommend Krishnamurti M. Costa’s site for topology ideas. Some of the galleries have wireframes while others do not, you just have to check it all out :eyebrowlift: Some especially good ones that do are Thomas the Plumber and this female.

Looking good dude! I can’t wait to see it complete!

that is a nice looking model just a word of caution cartoons are not made to the illustrators 8 head or the academic 7 1/2 head proportions its more in the range of 6 or 5 heads its seven heads if you are pushing for a more ‘realistic’ character. Toons have bigger heads in proportion to there bodies when compared to realistic characters

its supposed to be about caricature not realism, you have the freedom to exaggerate, the character you have modeled is usually in the six to five heads range

an image just to inspire you to exaggerate, push your character design and have fun 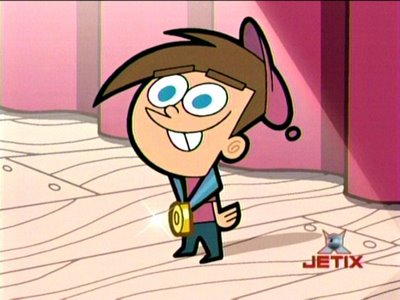 Additionally. 7-7.5 heads is closer to a real persons proportions. 8 heads is for classical/renaissance proportions - Michaelangelo’s David for example.

8 heads is for classical/renaissance proportions - Michaelangelo’s David for example.

To confuse matters more and perhaps score a point for exaggeration, I would pointless add that this statue is not according to classical proportions; actually most statues are not. Michelangelo deliberately made the torso bigger than it should be. the statue towers over any viewer so by making the torso bigger, when viewed from the vantage point of most viewers, from the feet looking up, it will appear correct. Its appears correct due to an optical illusion like how a Corinthian column will look straight even though it bulges at the center.

p.s I forgot to add this with my other post your character has a lot in similar to Linguini from Ratatouille you might look at him to get some proportion ideas if you are stuck.

For the head check out this video:http://www.seanjmacisaac.com/index.php?option=com_content&view=article&id=20&Itemid=17

Hey, thanks for the interest and comments!!

Yea, I didn’t check the realistic reference pic I compared my character to for realistic proportions. I used that pic to ‘eyeball’ the proportions of the torso and legs and made adjustments. Thanks toontje for pointing out the legs were too short!

Yes, it’s ‘cartoony’, so the rules of a ‘head’ as a unit of measurement for the rest of the body don’t apply, as many of you have pointed out. Off the top of my head I’m thinking about sonic the hedgehog and mario, the game characters, they are maybe what, 3-4 heads high overall?

I did go thru the videos at blendercookie.com on head, hand, and shoulder topology. I originally started this post because I thought the edge flow around the head was wrong (see first couple of posts) but my character’s edge flow above the ear seems to be the same as what I saw at blendercookie.com. They both seem to flow from above the ear to around the back of the head. Where as I thought the flow should go back around the ear and into the jaw area. Either way, I don’t plan on deforming this part of the head, so it’s all good.

As I mentioned in my 2nd post, I really want to avoid using shapekeys or mesh deform modifier. Rigging is progressing quite nicely, but I’ve stumbled into a problem with the hips. I’m starting a post here about the problems I’m having…