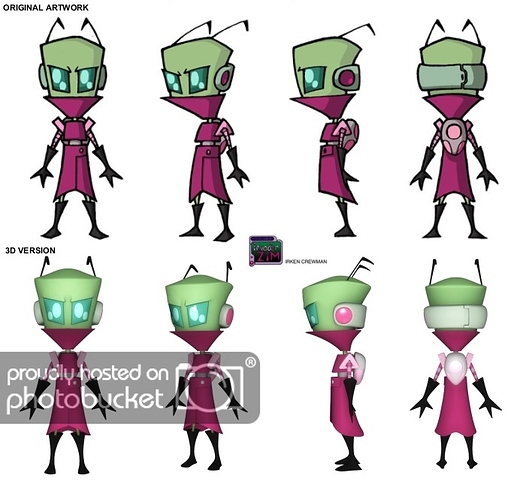 vinicius , thats funny , lol
i like the jetpack detaill

Are the spots in the eyes specular reflections, or a texture?

you can make him toon edges from the render window. There’s a edge panle for that. That way your renders would look even more like the original.

Now that hot!!Nice work Vinicius.You don’t even have to celshade it to know it would look just as good as the original.Great modeling.

this is great work!!!
your model looks exactly like the original (except for the toon thing)

/me is waiting for the animation, holding his breath …
Nice work !

Thats excellent. One crit: the reflections on the eyes are just mirrored…have a look at the original artwork.
Otherwise, I think this is superb.

Ammusionist, the spots are textures. I searched for more references of him, and found some statues of invader zim, where those spots was painted on the eye. It looked cool, so I did the same ^^

Hippie, Im not a big fan of the toonedges in blender. I tried, and it work with simple objects, but in things more complicated like the cloth of Irken, the result dont satisfied me

code_astro, I just noted that after the render…and was too lazy to redo it. So I left this way ^^

I tried some toonshading just for curiosity, and here is it

Hippie, Im not a big fan of the toonedges in blender. I tried, and it work with simple objects, but in things more complicated like the cloth of Irken, the result dont satisfied me
See ya

Try harder. I think you have to play with the smooth normals to get the results you want.

+.9 The only flaw is the two antennas sticking out of his head. Compare it to the original, they are a bit short.

Great job! What were your toon shading settings?

And pleeeeeease, make an animation.

That would be so sweet.

brilliant work!
when does the animation come out