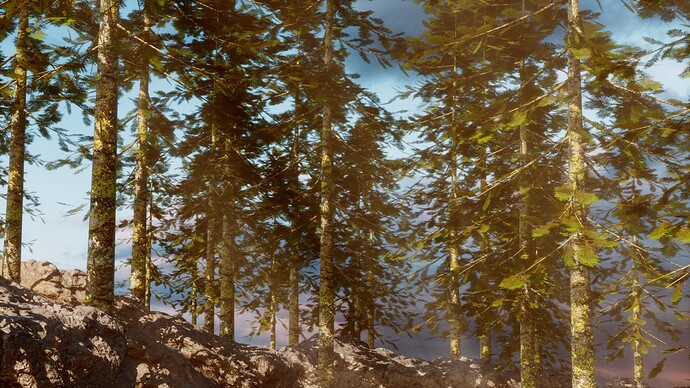 I made this showreel for my youtube channel. I also composed the soundtrack.
Almost every scene is rendered in Eevee (except for Spøttrup Castle renderings, rendered in Cycles, when Eevee wasn’t available).

It is a combination of Danish castles and scandinavian inspired nature renderings.

Some of the castles in this video are:Hammershus and Spøttrup Castle.
If you go to my YT channel there are longer videos about each castle.

For Hammershus Castle, there are 3 videos, from its early days to the late 16th century.

Thank you for commenting.

Yes, I did use Eevee for the rendering, and yes, it looks a bit too much “game like quality”, but when producing many videos with a length of at least 1½ minutes each, the render times must be very short.

Most animations featured on Discovery, Science and National Geographic Channel are very game-like quality as well.

As far as I know, the only place I’ve seen photo-realistic animations for historical reconstructions are on the german TV documentaries, ie. DW and ZDF/Terra X.

I love the camera shots. And some of the background skies are outstanding. the trees and stony broken ground of the hillsides and mountainsides is Very Good!

In fact, the landscape shots outshine the medieval buildings.

But what you’ve done is allude that this is a video short clip about medieval stuff, and then transition to sweeping shots of forests and hills. But they’re empty of “medieval stuff.” There should be still shots of a couple serfs cutting trees or gathering woo, in a cart. Something that ties to a medieval community.

Or a concluding shot as the camera is tracking through the woods to an overlook above the castle compound.

Last, the castle textures look weak. And yeah, I know its a challenge with EVee texttures, but I think for the castle, switch to Cycles for that video render. Since you’re piecing all the clips together in the compositor and video sequencer anyway. That alone would ramp up the final quality of the video. Which actually should be the most memorable takeway from the video.

Thank you for your comment. Always nice to get some critique.
The reason I’m not using Cycles is because rendering the castle scenes with Cycles takes too much time and can - eventually - crash my GPU, which is too expensive and difficult to get a new one these days, of global GPU shortage.

All my animations will be rendered in Eevee, to cut render times. I cannot afford a render farm.

Wow! love love love the openning shot. Question - how did you do the lens flare? It really added a ton.

Thanks.
I created the lens flare using the Compositor. I added a fake sun (circle - plane) and added some blur and Glare node. I can’t quite remember the node setup, but I think I might have used another Glare node (set to Ghosts), to create the lens flare effect.

However, I’m considering another option for creating lens flares, but I’m on a low budget. I’d very much like a tutorial on how to setup a lens flare rig using alpha planes instead. I know there are some addons already, but it’s too expensive.

It is a very effective and impressive video – especially when one knows that the musical score is original. The camera work and pacing is very good.

Yes, the very last render in the sequence looks more artificial, and, being last, it is “the last impression that the viewer is left with.” Therefore, you might wish to either improve upon that render (esp. the texturing) or move it someplace earlier in the sequence.

Thanks - yes I’ll agree the very last sequence is very artificial. It’s also one of my earlier works.

I will consider your advice next time I make a similar video.