Christmas trees previously had me stumped, but I did some experimenting last week and started to make headway. 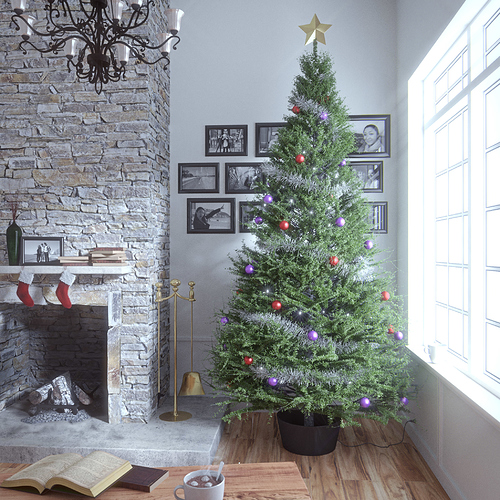 That’s a pretty good looking tree. I’m interested in your process. Were you planning on making a tutorial?
As for the critique, Were you looking more for critiques on the tree or the scene? my main crit for the tree is its stand. What’s holding the tree up? Most stands I know of look like this. I spose it maybe could have dirt or something in there with a stand like that, but where is the dirt(you know, on second thought, having a Christmas tree in a bunch of dirt for a stand doesn’t sound like a good idea.

) If you want critiques on the rest of the scene, I have a couple.

edit: was this meant to be a fake or real tree?

Hehe, what a relief.
I saw the thumbnail image and I was thinking - Damn this render is really good, he`ll own the BG competition.

Overall it looks like a good render. Id personally use real geometry in some ares instead of textures (I quess you couldnt afford that though because of the tree high geometry) - I refer to the fireplace.
I`d probably change the super strong light from the window with a nice frosted window and beautiful early morning cold winter landscape.

(You taught us to never have completely white areas in our images - your white covers more than 1/4 of the image. Sometimes it works though)

Anyways, those are just some minor things. Like I said, overall it`s a wonderful render.

Keep it up, Andrew

Who cares about the tree, I love the books XD
Are the pictures personal? I see an Asian girl I think…

It isn’t related directly to the trees but it looks like there should be more shadows cast on the floor or maybe I don’t understand lighting that well, the tree is awesome though.

Tree itself looks really good, but surroundings should be greatly improved to make scene stand out more. Fireplace, star and floor especially, they just look bland and not realistic. I think I would also remove the chandelier on top left and just make fireplace look more interesting. At least for me it takes focus unintentionally out from the tree itself

Who cares about the tree, I love the books XD
Are the pictures personal? I see an Asian girl I think…

That would be his wife. U might need to apologize.

there is definatly too much light coming from the window. a net curtain would go a long way towards not needing to worry about whats going on outside, rather than that intense glare. the tree looks great and i’m looking forward to seeing the tutorial on that. but the bucket does need some dirt or something to hold in the tree (buckets of dirt are not as uncommon as ctdabomb realises!) there is something about the fireplace and the socks that is just screaming CG. the ash doesn’t help. it looks like a procedural texture, certainly not the fine powder that ash is. the bricks/stone work looks great, but the hearth lets it down, needs more bump ( theres something i dont say often!)
also there is a lot of dead space, some decorations on the wall would help there (between the fire place and the chandelier)

The bucket the tree is in looks a little weird in my opinion. Also, some caulking around the base of the marble might look better, and the corner of the fireplace might be a bit to sharp, try rounding it off. I hate to critique a master though…

Looks like the tree is made of rosemary sprigs. Not a bad idea if you live where pine trees don’t grow well, or you really like rosemary…
Compared to the rest of the scene, the window looks sketched in.
The tree’s lights are still plugged in and lit up, almost invisibly in the bright sunlight streaming in the windows. If this is a scene showing the morning after the night before, with a cold fireplace and someone forgot to unplug the Christmas tree lights, then lose the cup of steaming cocoa in the foreground. A responsible person would have unplugged the lights first…
The fireplace shovel, in that rotation, can be confused with a bell. It would read better in more of a side view orientation.

Come to think of it, Trader Joe’s sold rosemary bushes trimmed into Christmas tree shapes a few years ago. They weren’t that big, though.

Another awesome render Andrew.
For critique, I’d say the window looks too bright. It seems as though it is almost glowing, rather than just light shining through.

Also the tree looks more like a balsam fir rather than a white spruce (generally what most Christmas trees are). Unless of course it was one of those fake ones that you buy at the store, then the needles look great.

If it is a real tree, you might also wanted to have added some fallen needles on the floor. It doesn’t take long before gravity does its thing and you have spruce needles all over the floor. Especially since it is right next to a fire place, which would dry out the tree faster, therefor making more of them come off.

I can’t seem to be able to tell what’s holding the tree up? It looks like it simply goes into an empty bucket.

Either way it’s still amazing and looks quite realistic! I’m just trying to find errors based off of real world science.

ONly the window seems to be over brighten!!! rest as usual awesome!!!

The scene is nice. The tree looks great!

It is interesting that there is a light inside the fireplace - it probably looked very dark otherwise, but perhaps it should since there is a lot of white light coming in through the window, the ‘camera’ needed to increase the shutter speed, or reduce the aperture to limit the exposure, therefore the fireplace becoming very dark.

Is a good example for a Christmas scene. I think that the light is correct, It might be a little less bright but only a little.
Thanks for your tutorials!

You did a great job explaining the tree generator.

The tree is awesome… However the bucket looks out of place and i feel like you could have used a better bump map on the Stone for the fireplace.

Awsome Andrew! Perhaps a little soil in the bucket.

good work, but as for me bricks on fireplace are overbumped, it seems that you used crazy bump for bump maps or using diffuse map for bump, i think that if you make bump map in PS it will look better.

window it seems that you lighting the scene with geometry plane and it lights on both sides that is why window is overlighted from the back - it is impossible bc light should come from window and windowframe should be darker.

floor, even if it a wood it should have lacquer on it and lacquer wood should have specular and reflection, and a bit of bump, on your rendering it looks like flat paper, the same is for table material.

tree is fine! but where is the soil in tree bowl?

I don’t pretend to know what I’m talking about, but the branches and needles of the tree are very detailed and realistic, but everything else in the scene doesn’t seem to match. Its like the tree is in HD and the fireplace, ornaments, and other things seem almost like a cartoon in comparison.

A very good tutorial Andrew!
An in depth presentation of sapling generator.
However, when you try to select an object next time, please, use the outliner LOL.
A little more love on the existing blender UI, right?
Crazy bumps?
I’m aware of this app.
We can generate maps of similar (or better) quality in blender, internally.
A combination of nodes in compositor,
(The method is adopted from old Pshop tutorials).
and a fast trick on baking normal tangent maps from bumps.
However, having seen another tutorial of yours, the cave,
the use of such pre generated normal maps is wrong in most cases. Wrong tangent space, in certain areas.
In the case of the fireplace, the “ceiling” of the opening is not visible. If it was, I bet it will look quite wrong.
Alternatively, you can use bumps only, then ask blender to bake normal maps from bumps. Right tangent co ordinates this way only.

Posting all these because on your cave tutorial you said that you don’t quite understand what tangent coordinates means.