Compositing a scene with external images? 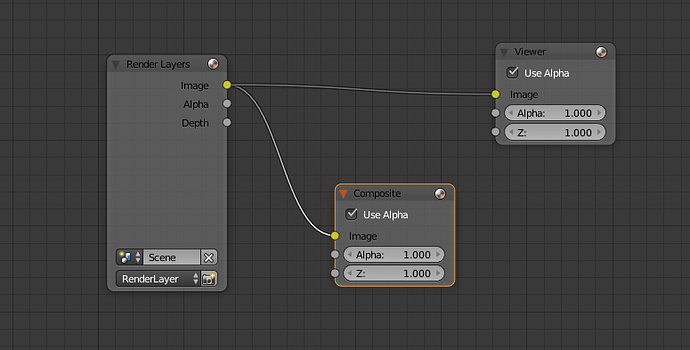 I can’t seem to get the external image to show up, even when I have a viewer node and backdrop checked.

If the images are already rendered like you said, you would add an input Image Node and select your first image. I think then you get to choose if it is an image sequence or not and you choose the frame range you want to use.

Yes. And, render the output as MultiLayer OpenEXR files.

This file format will capture the exact digital data produced by the renderer – separated into “layers” such as shadow, specular, Z-depth and so on – and make it all available to you in the File Input node.

This format is expressly designed to be used as a digital intermediate-data file in a multi-stage pipeline. It was originally developed by Industrial LIght & Magic. The “multi-layer” extension was added by the Blender Foundation (and immediately adopted). You should use it for every step up to and including the “final print,” which might just be (non-layered) OpenEXR. Generate all of your “deliverable files” from that master. In this way, you won’t “throw away data” except in the final video-compression stages.

Hello! I just realized I hadn’t replied to this one, so I am very sorry for being so late.

It seems Hunkadoodle had a solution that worked for me, but I still appreciate your input! Thanks!

I assume it still IS thee best answer provided here, no the former, but then did any one else not know about this tidbit of info on Render comp file formats-openEXR, multi-layer data and such, then realize it was so simple and SO important but didn’t get the acknowledgements . . . good if not best answer. Way to obvious not to reply from my veiwport.

I’m not really that advanced in Blender… so I try to go with the simplest solution.

But I am happy for any input I can get.

Thanks for OP. That was the assumption I had and I was hoping fifty other people would agree/admit that this was commonly unknown, but it doesn’t matter. It was such a cool post, I wanted to bump or antagonize, and it was worth trying.

Sorry for resurrecting this old thread, but while reviewing my post history, I came up with an alternative solution that might be better depending on your needs.

As you mentioned, you were interested in compositing images from another scene. My original response made the assumption that you had already rendered your images from the other scene. If that wasn’t the case, you could use Blender’s Scene data block and the Append or Link operation to make your compositing workflow more seamless. This will allow you to press render once and have all data available to you rather than having to save out external files for each additional scene you want to composite from.

Blender organizes information about your project into data blocks (https://docs.blender.org/manual/en/latest/files/data_blocks.html). Data blocks can be shared between projects either by Appending (copying all the information from one data block and all subordinate data blocks) or by Linking (referencing the information in another file without making a copy). There are benefits and drawbacks to either, and you’d need to choose which option is best for you (https://docs.blender.org/manual/en/latest/files/linked_libraries/introduction.html?highlight=append).

So, what you would do would be to choose Append… or Link… from the File menu, double-click the file you would like to composite images from, double-click the Scene data block folder and choose the scene data block you would like to append or link (unless you changed it, its default name is “Scene”). Now you have added a new scene to your project’s .blend file and can use it in the compositor. At that point, you would just add a new Render Layers input node type from the Add menu in the compositor. From the Scene selection dropdown menu, select the newly appended or linked scene, and you now have that scene’s data available to you for compositing like the following image: There are some things to consider, though. When you render from your compositor where both scenes are referenced, the frames that render are in sync. That means that if you render frame 86 in one scene, the linked or appended scene will also render frame 86. For compositing static scenes, this isn’t that big of a deal, but if you have animations or simulations, you may run into issues. There may be either a work around or workflow setting that accounts for this synchronization, but if so, I’ve never come across it. Hope this helps!