My son wanted to build a bow so I started designing this for him, and it’s growing on me. I might just finish it, too, if someone can give me an interesting idea to do with this.

The riser (the cyan thing in the middle) is the weirdest bit of hard surface modelling I have ever done. 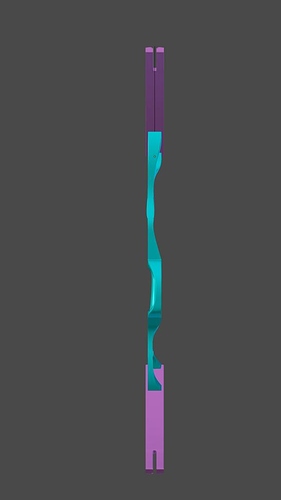 Added top wheel and bottom cam. Working on the string. You could ask some business like i.materialise to 3d print it for you and then string it in real life.

Modron, thanks. Till I got my head around it, the process was a little frustrating. Once I figured out what I was goind it was great fun watching it grow into shape.
Animaniac, I am so tempted to have it machined on a CNC milling machine. The cost is prohibitive, though, so it’s not going to happen. As it is, I want my son to make it himself out of wood. It will be a good exercise in both manual skill building and learning patience.

If your son is going to make one out of wood, make sure the riser much thicker and without any holes in it, otherwise it will most certainly break (the design you have there is usually built from hi-grade aluminium alloy or polymer composite) Oh, and nice modelling btw

Thanks for that, Jorzi. I want him to carve it out of 18mm spruce ply. I have used that stuff for all manner of structural components (a small bench supporting an 60kg rolling mill, for example) and it is incredibly strong. Now I realise that making it take a 60-pound pull would be crazy, but since he’s a kid hopefully this will be strong enough for his purposes, and easy on my wallet as well!

Plus, how cool is it to turn up to school with one of these slung over your shoulder? Wish I had one when I was a kid.