I have been wondering if it is possible to copy a particular particle hair from one model to another? The reason I want to do this is that I experienced a weird bug in blender in that when I deleted some unnecessary polygons on the mesh, the hair strands just totally fudged up. So, I decided to stick with it, but I then removed it at a later date.

While I am not sure on the process, I think you can do this through the append/Link option in blender. If the object is in the same scene, (Ctrl L) copies materials. (Ctrl C) copies basically everything else including modifiers.

I hope this helps. I am still learning blender myself

Hmm, I just tried it and interestingly the particle system repeats the bug when copying from the one mesh to the other. That I had previously stated about when I deleted some faces on the inside of the mesh that were not needed.

I attached the screens to show you what I mean. The only difference between the two models is that the one on the left has just a few faces that were deleted, that were on the inside of the mesh.

The one on the right is the one with the correct particle hair positioning. The one on the left which was I copied the particle system from the other to is totally fubarred.

the no_bug.jpg shows the hand when the particle hair is properly positioned and where the additional polygons were.

the bugged.jpg shows the hand of the one with the particle hair bug. Notice, that the polygons on the inside have been removed, and that is the only difference between the 2.

Note: I am using Blender 2.47 the latest stable version.

Looks like until this bug is fixed, I am just going to have to put the character on hold until it is. 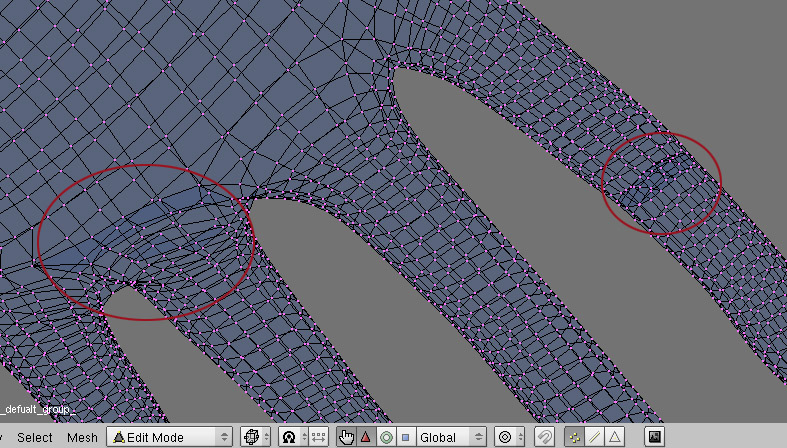 You can convert the particle hairs to a mesh with the “Convert” button in the modifier stack. Particle-bugs can’t harm them if they aren’t particles anymore! Reattaching them to the head might be a pain ,though.

Thanks for the tip, but it really isn’t a good option for this model. So, I will just have to wait until the bug is fixed to continue with the model.

So, I will just have to wait until the bug is fixed to continue with the model.

Don’t assume that it is a bug, it may simply be a limitation on using the hair particles. A very hard-to-swallow limitation, I agree, but in my experience, it’s hard to get the devs to acknowledge a bug if something does indeed work, though maybe not as one would prefer it to work, and that is the case with the hair particles.

Did you not read my previous posts or something?

It is no doubt a bug in the hair particle system. As a programmer myself I would definitely classify this as an unexpected result / not the way it was intended to function. Thus, it becomes known as a bug. Hell, if I programmed in python / c++ I would look into the source code myself, but I know I can’t. Since, I am not familiar with python at all and have very limited c++ knowledge.

Yep, I read your posts, and I’ve experienced exactly the same thing. But whether or not it’s a bug isn’t necessarily dependent on unexpected behavior, but more often on non-functionality, which isn’t the exact case here.

My post wasn’t to disagree with your assessment as much as to caution you against expecting it to be treated as a bug. The hair particles system functions, and within limitations we’ve both stumbled on, it functions quite well. The devs may consider that perfectly adequate, and not put much effort into making it work differently so edits to the emitter mesh are more forgiving. It may even be that the overall topology of the mesh in terms of vertex count is essential to the proper functioning of the hair particles as they are now implemented. I can’t say for sure because I didn’t write the code and have no interest in digging into it.

What I can say is that if it’s reported as a bug (and I’d encourage you to do so), it may be “rejected” for attention simply because it could be considered as simply a limitation on using the system. I had this happen when reporting that the hair did not properly respond to standard lighting techniques, went through a week or so of testing and documentation to back it all up, only be told that it’s simply a “limitation,” not a bug. So it goes. I found workarounds.

One workaround you might consider (if indeed the potential bug isn’t addressed) is to always use “wig” meshes for hair particles, simple meshes that will need not further vertex-count editing once made, that can be linked to the main mesh many different ways depending on the need for movement with certain poses, etc. I did that with my current model’s head of hair (a good thing) but not her eyebrows, which wasn’t so good, but I wasn’t aware of the limitation until long after I’d finalized too much to want to change that hair system again.

Bottom line, we both agree that it’s not “right” that editing the mesh in certain ways, no matter where, will jinx the hair particles, but our dissatisfaction may not be enough to justify a bug hunt, because the hair particles do work well within that limitation. Just a heads up that may head off some frustration if you decide to report it as a bug.

Ah I see where you are coming from now. Sorry about jumping at you, but the first post didn’t quite explain or offer as to why you suggested it like you did.

No biggee, I was too terse in the first post, and likely too verbose in the second – no middle ground with me