Creating a night in blender cycles

Hey guys,i have a scene wehre is some rain ongoing and it should be in the night with a warm and soft light,but i dont know how i can create a realistic night,i guess with color filters?thanks :p.

If it is night then there is no light, right? So start off dark and build up the lighting. Instead of using “filter” at the compositing step try changing the world color to the color you might have chosen for the filter. Add in street or candle light if that seems appropriate. If the scene is wet then there will be a lot of reflection so use the Glossy shader. Use Emission shaders where appropriate, like tail lights of cars and such.

and my scene looks ike this,not done yet :)the windows will have lights too 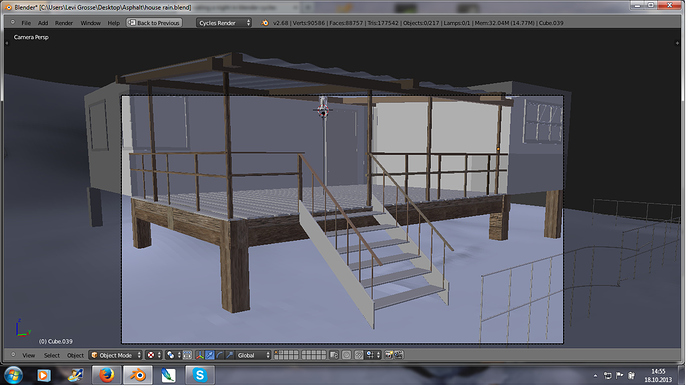 Unbenannt.jpg1376×776 253 KB
and there will be some grass an rock (slightely mossy rocks too and rain,and it will have camera movement,and some mountains etc will be there too

Why not google photographic techniques of night shooting and reproduce what you find there? They often tell you how to model and supplement lighring in the dark.

In video you can make a scene believably night by adding blue to the light. Not at all realistic, but its what they do in many movies to denote that it is dark. Another trick in videography is to film during the day and then turn down the exposure in post. They do that to avoid noise that you get from trying to shoot in too low light settings. Maybe that info will help or maybe it is completely irrelevant.

Light comes from many directions at night depending on where you are. It depends on whether its cloudy, full moon or no moon, how far from the city you are. Stuff like that. If ur not far from a town or city the horizon will glow which will add light that will be reflected onto you from the clouds overhead. If its a clear night with a full moon, you could add an emitter plane above with white light or slightly yellow as moon light is reflected sunlight. No moon. Not close to city. Not cloudy. Then you just use an incandescent bulb as your light source (yellow orange light). The actual country is pitch freakin dark at night when its a new moon. You can’t see an f n thing.

mm,that was really helpfuel,so what would you think,is it a good idea to make kinda blue lights(stars) and then overlay it with a filter?,cause it far veryyy far it shall be on amountain :).thank you very much :).and @3point edit,makes sense already did it

Day for night in movies and tv are done for pragmatic reasons. Save money by not using lights, save money by not paying people to work at night.
Problem is the contrast and shadows. Only successful day for nights are shot on overcast days.

Blue coloring of image is probably due to emphasis of incandescent illumination that is much warmer in color ss mentioned above.

Well I can’t find it but there is a youtube channel I subscribe to called Film Riot. They say that a purposeful blue light is added to light rooms at night to indicate that it is dark.

But as for the op’s question. I wouldn’t use stars to light a scene. The light actual stars give off is next to nothing. I would just use the world lighting for this as shadows aren’t really noticeable at night unless it is a full moon or you are standing next to a light source like a fire or light from a light bulb or something. And it isn’t necessary to light the scene with any blue per se. I was just bringing up a technique I had heard of and seen in movies usually to light a room at night when in reality the room would be pitch dark. Not sure if it would be the right move for an outdoors scene though I seem to remember some movies where they have done this. I like to video record and do photography so I pay attention to such things in movies.

Just build your scene up. Go outside at night and look around for the light sources, because without them you wouldn’t be able to see your hand in front of your face. Moon, horizon glow from either city lights or the sun being far enough around the earth to light the clouds on the horizon some (say 4am), fires, lights like street lamps, light bulbs, lantern, etc. Just pretend you are god and building a place on earth. Add these things one by one and the realism adds itself. imo. Of course most of the realism is in the materials/textures of the objects in your scene not the color or intensity of the lights alone. I mean how do you know there is light if not for things reflecting that light back at your eyes?