I’m trying to create a rational Bézier curve (actually an approximation of one). To do so, you need to create a normal/ordinary Bézier curve (in space) and apply an perspective projection to it. That means that each point of the curve is projected towards the origin.

Between the normal Bézier curve and the origin one adds a plane, so that the Bézier curve is actually projected onto this plane (this projection onto the plane is your rational Bézier curve).

So far so good, but I got a few short questions:

you could use poly line instead of a bezier

then you could use the Retopo tool
may be before in 2.6 convert to mesh then use retopo !

@RickyBlender, you mean start with a poly line (don’t know where I can find such a line by the way, in the menu Add → Curve I only have things like Bézier, Circle, NURBS, Path)…? Then I won’t get a rational Bézier curve in the end. I am using Blender 2.62 by the way (on Linux).

but i dont’ know what a rational bezier is can you elaborate ?

This is exactly what you can see in the figure in my first post. In the top there is the ordinary Bézier curve (in 3D space), from which some lines emanate (towards the origin). Then, someway between the curve and the origin I added a plane (so a 2D “space”). Every line intersects with this plane (each line “creates” one point in this plane). If you take all those created points together, that would be the rational Bézier curve.

mean all the points on the 2D plane = rational bezier curve!

have to think about how to do that in blender !

cause this is not really a retopo or an ortho normal projection either!

each curves point is extracted to origin = 0

so i guess this would require a script to do that
and then with mahutil calculate the intersections between plane and the lines!

do you need bezier curve here or you can work with poly or spline curve?
i mean in blender you can easily convert from bezier to poly to spline anyway!
also you can convert from curve to mesh line or mesh to curve !

now here we are talking about a 3D curve bezier or other not a 2D one ?

another problem here is you cannot show 4D lines in blender only 3D !

how do you deal with that in blender ?

there was a script last week on how to add a bevel curve between 2 objects in python forum !

my guess is re open a new thread in python forum and ask for a script to do this
and reference this thread here !

also for a bezier curve you can see only the control points not all intermediary points!
but if you use poly then yes you can see all points !

i think it should be possible with a small script and other peoples might be able to help on this task!

now don’t know what this would give with 4D bezier
never work with that beast before !

can you give example of 4D curve cause right now in blender we don’t really have 4D curves only 3D
so you would have to define your own math model for a 4D curves parameters for using in a script!

The lines between origin and curve points could be done with vectors or lines bezier too !
depends how you do it !
but i don’t have script example of 4D bezier lines only 3D !
i mean which one do you prefer here ?

vectors might be easier to work with mathutil anyway !

@Ricky, thanks for yet another answer! I’ll look into the Python stuff.

It would be quite difficult to depict a 4D curve :D. However, since I’m familiar with the mathematical background of Bézier curves I could give you an expression for a 3D rational Bézier curve (but not sure whether that would be useful). Actually you can think of it as an ordinary Bézier curve, but with weights for each control point (the higher the weight, the stronger that control point pulls on the curve).

Mind you, the idea is not to actually create a rational Bézier curve. I only want to create something like in the Figure above, that shows the process of creating one.

but on screen you could see only the 3D rationel bezier curve onto the plane !

not the original 4 D bezier which cannot be seen on 2D screen i think !

and for the script i mean if you start from a 4D bezier then you will need to somehow defined the points with an algo for a 4D bezier to start with i think !

but not certain how you generate your data here !

I don´t completely understand what do you will to achieve, but maybe thisway:
Put the cursor at 0;0;0 and create the bezier-curve. Tab to edit-mode and grab the curve to z-direction where you want it. Go to object-mode and convert the curve to mesh (alt c). Back to edit-mode, select all the vertices and duplicate them (shift d). Set the pivotpoint to cursor (0;0;0) and “fake-extrude” duplicates and scale them to 0 (e-> esc-> s-> 0). If needed remove duple-vertices (w -> remove duplicates) and there you have the radius´s. Now set the cursor to the high in z-axis where you want to create the plane and create them. (See N-panel-> cursor location). Now select all the radius´s and subdivide them (ctrl r). From N-panel you can see the level at which the vertices appears and move them to the plane level. Possibly it is needed to use edge slide tool too (w-> edge slide). Now the “rational bezier-curve” is located to the plane.
In editmode by the header you find “limit selection to visible”-icon. Tick it off.
Ctrl z is undo in blender.
You can choose any one “row of vertexes”, separate them to own object and convert them to curve (alt c) or vice versa.

@Marksto: Yep, sounds like it! But I’m not that experienced with Blender yet, so there are a couple of things I don’t understand…

So for now, I have exactly the same as in my first post, but faster, using the fake-extrude method.

Its not possible select only vertices without edges.
The range of pivot points are in the header. The shortcut ´cursor at pivot point´ is . (dot) in letter bad.
With radius´s i mean all the edges between origo and (curve)meshes vertices.
I´m also not very familiar with Blender, but take a look at Blender 3D Design Course from Gryllus.net/Blender/3D.html and from there Blender Video Tutorials, part Curves and Surfaces. Mr Neal Hirsig explains all the basics there so very well, (as many other Blender basic things also).
Onward i don´t understand completely your goal. I assumed that it is the projection of the curve on the plane either curve- or mesh shape. The term “rational curve” is alien to me.

good question
why is it called rational bezier curve
any special meaning or rules behind this !

do you havethe algo for a 4 dim bezier cuve
and is this with more then one segment or only one segment ?

i have a script for 3D bezier but only one segment not like
for spline line whit many segments!

The mathematics for deriving such an expression is a little complex. The thing is that (like I said before) you project an ordinary Bézier curve to a lower dimension using a perspective projection. Then you’ll end up with an expression for a rational Bézier curve.

@Ricky, no I only worked with 2D rational curves yet.

dont think i have this NURB equations on a script

i do have the bezier curve with degree 2 or 3 parabola or cubic
but don’t think it is yet a NURB!

are you able to run the new script for your file
i tried and i get an error for the line!

did it work for you ?

@Ricky, script? Are you talking about my thread in the Python forum? Yep, it works (using the normal Blender, haven’t tested it yet with Bmesh). 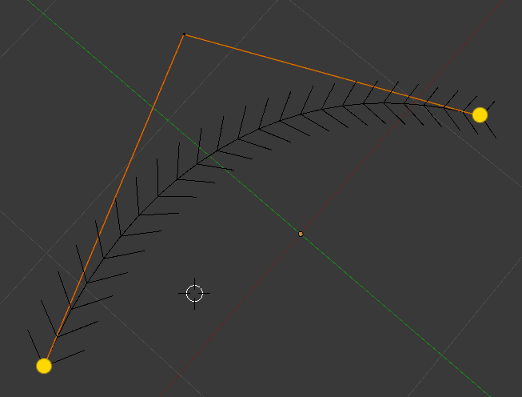 * Edit: This is only the case if the order is set to 3 (and thus the degree is 2, quadratic). For me this was the default setting.

Hope this makes my explanation a little easier to follow!

[Edit]
So to conclude, when you would project this B-Spline in the picture (3D) above to a lower dimension (so from 3D to 2D), this projection would be a NURBS, a piecewise rational Bézier curve. This is true because each segment of the B-Spline is an ordinary Bézier curve, which gets projected and results in a rational one).

strange i’ll check some more on this?

i know that you can use a 3D curve instead of a path curve
but may be path are simpler only one control point and be like a parabola instead of a cubic equation!

i tested in bmesh with error !

i think you should ask for a version working with Bmesh
cause most of the next SVN will be with Bmesh so if you want it to work later on
it should work with Bmesh i think!