A model i have worked on for a few hours!
I’m happy with the general model but i do think a lot of work is needed on the hands/feet. I’m finding this quite hard to get right and was wondering if anyone could help me get it right?
Also how should i go about adding the yellow part of the model shown on the front reference image?
[ATTACH=CONFIG]234162[/ATTACH]

your animal is suffering from what is known as ‘boxiness’. meaning some of the round parts are too square. for a character like this I would recommend modeling with the subsurface modifier on. also, it’s a good idea to provide a wireframe, which I think can be done with shift-ctrl-F3, but i’m not positive. I’ll make a pic of how to extude a circle out of a rectangular field of quads, brb…
(edit) after looking at the reference image, i see that the legs are seperate pieces…so it can be done more easily, I’ll make a quick example… 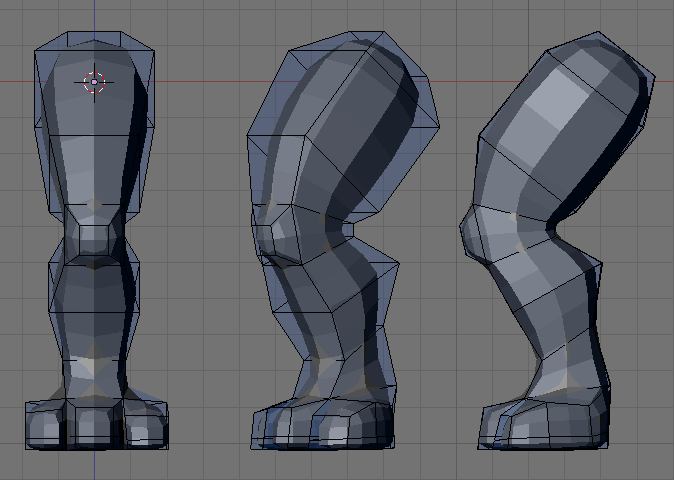 That’s fantastic!
is they any possible way you could do a quick mesh on the arms too as well?
if you could send these to me i would love to improve my model the best i can and i think with your help i can make it look very nice!

the arms would be made essentially the same as the legs. start with a cube, add a subsurf modifier, and start extruding, rotating and scaling as you go. it’s best that you attempt to do it yourself, and if you have trouble, I will help you fix it.

Dont know if it’s any help or not but I saw this thread and need the modeling practice myself so I whipped this up quick.

p33p for a quick model that already better than what i did in a few hours!! really good work man :).
And Modron, i’m going to try modeling the whole thing again later and i need to ask, when you made the leg how did you make the toes?
Did you sub-divide the cube at the bottom and extrude out?

no I extruded the two side faces of the ankle outward ( to the sides ) for the heel, extruded the toes from those 3 ( front ) faces, and did some tweaking.

So i took your advice and modeled the legs/arms of croc using a sub-divide cube. These were the results. 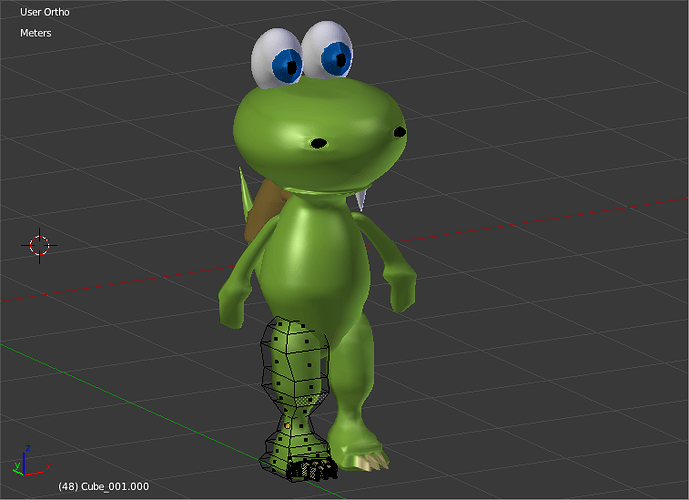 (Sub-surface shown in the left leg)
Whilst i was vastly happy with how the legs turned out i just can’t manage to get the arms right. This is mostly because every time i try to create the fingers the whole model just ends up looking silly because them…
Any new tips/tricks?
and are the legs okay :)?
Modron (Modron) May 15, 2013, 1:07pm #10

try making the hands first and then continuing with the arms. that is what I do. first I start with one finger, duplicate it for the other fingers, weld them together at the webbing, and work back toward the wrist, then the arm.
(edit) here’s a slightly clearer illustration of how i did the foot. it’s really just a T with toes. 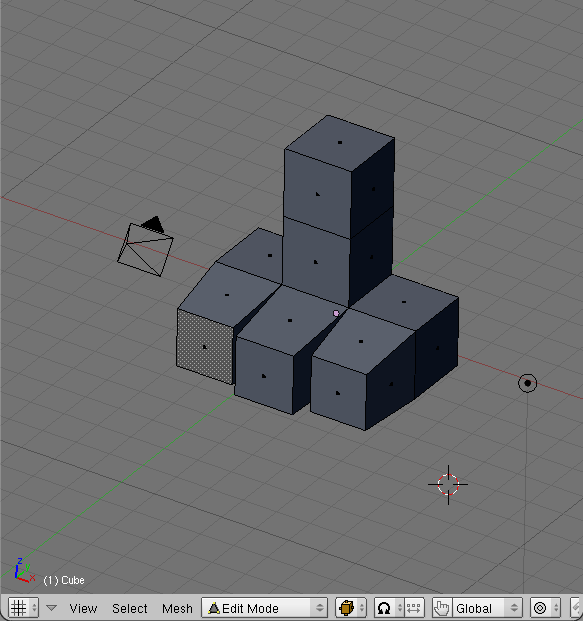 also, I just noticed, you have way too many polygons for the toenails. better would be to make them seperate objects, texture and duplicate them, then join them to the leg mesh.

So this is my updated model. Tried to do the thing you said with the toes and they turned out a little funny but…okay i guess!
Re-made the eyes so that they were less blocky around the materials
remade the hands but didn’t get around to fingers.
Took a screenshot of the back which shows the backpack.
What advice could you offer now :)?

the illustration I made is just of how you start the foot, but you need to tweak it to get it into it’s final shape. scale in the heel vertexes, so they are closer to the middle for example. you are like a blacksmith and that is the raw steel blank, which then must be hammered into shape. 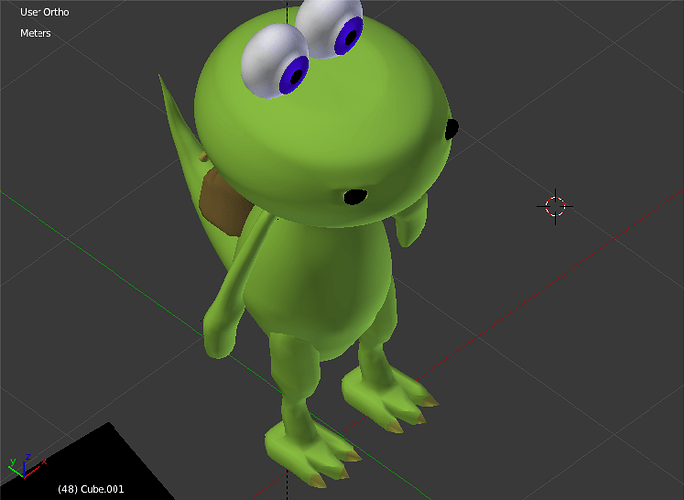 How’s this?
a little better?

it’s looking better. personally I would smooth the vertexes of the heel area with the smooth button a little.

Big improvement over the original so far, keep it up! I think the biggest issues at this point are the feet, which you’ve already gotten some advice on, and the fact that your legs are straight up and down–if you look at your reference pics, you’ll see that the knees are forward of the hip and ankle joints.

yeah, not too bad. very square. the was one of my favorite games when i was a lot younger, so i still remember the character prety well. he needs to be a lot more rounded, but not too bad IMHO.

here’s a little suggestion on how to make a toonish hand starting from a plane. in the first image, everything is made flat, with no depth. in the second image, i have selected the whole thing and extruded to give it depth, and then squared up the wrist a bit. 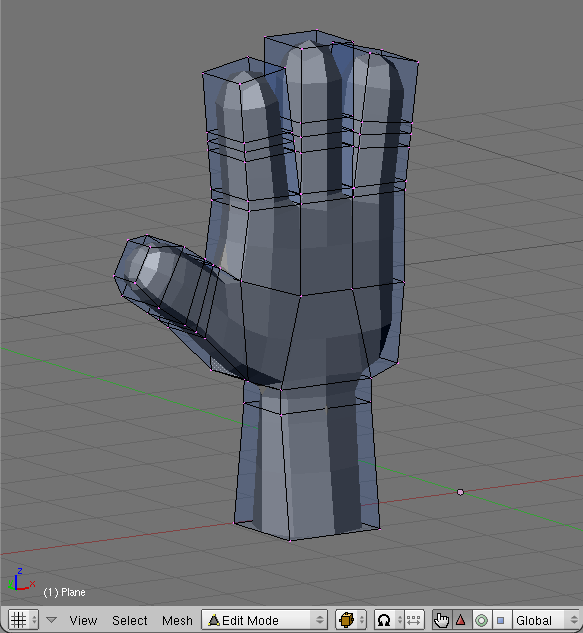 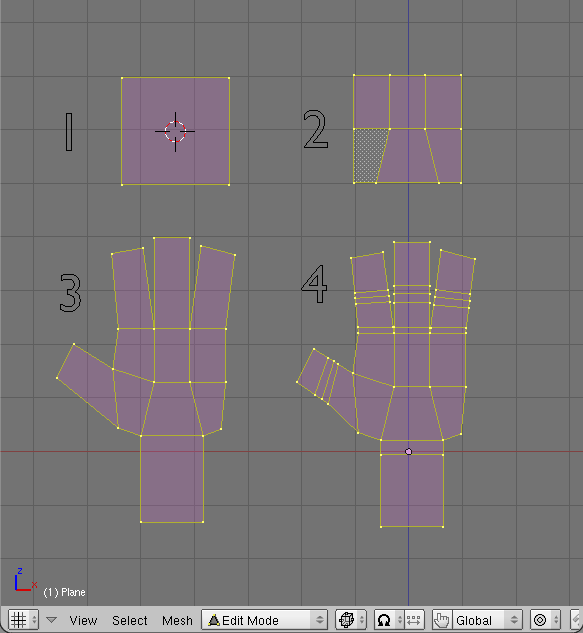 So after making the plane and that hand shape, do you extrude it so it’s more cube like and then add a sub-division surface?