i have done an personal project to learn Blender game and make an game with little time deadline, and i’m happy to present you “Cube Roll”, it’s an simple remake of game “Color Cube”, if you see what i’m saying.

All is done with Blender Original version, no UPBGE.

So i propose you this little game contain 12 Levels, with end level Big Boss.

Menu with settings screen, light and movements fullscreen or music.

I have not make any video for the moment, but i have compilate game to exe for easy install, but just for Windows 64bit, i dont know if it’s work for 32Bit.

Tell me your impression, and if you like it why not i can share the Blend file.
It’s not my real first game but that is the only one i have really done.

Thanks
(sorry for the English)

Windows download: https://www.dropbox.com/s/0mmq0xarn2kx9rf/Cube%20Roll.exe?dl=0
(if you can’t save settings or game level ended not saved, please look your folder install in “program file” and look if you have persission to edit as user windows) 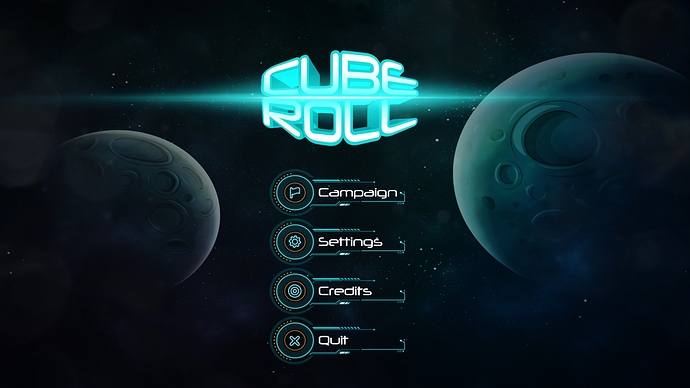 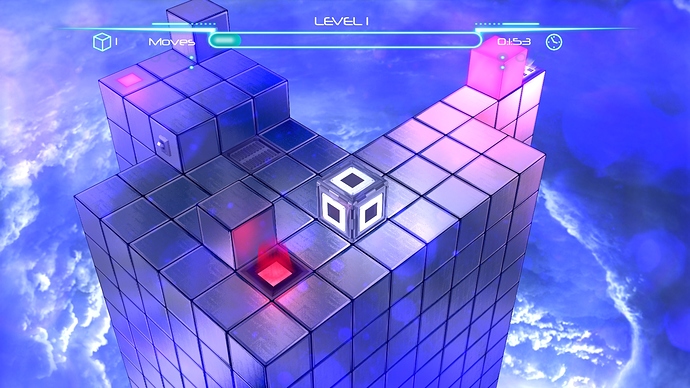 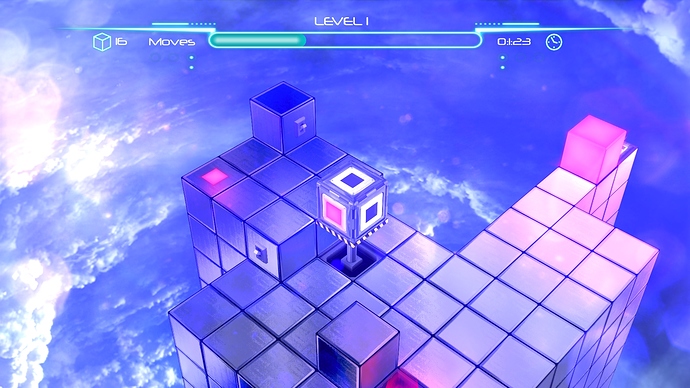 Wow this looks super polished! I will play it in a bit and try to give some feedback.

Thank, i’ve look your tuto for the menu, but i have added fullscreen option, because it’s require for game.

Thanks, i’ve work of my best to make good graphics, but with Blender it’s complicate find good FPS and good graphics.

Otherwise you know the good lighting is due to lens effect, i can make some tuto if people want, for material render or game mechanic, like for the Level12.

Thank you for your feedback

I agree, this looks extremely professional. Everything about it looks awesome! I’m looking forward to playing through it first thing tomorrow morning.

Thank you APilch, tell me what you think about the game.

ive update the download link for fix bug save settings with install.

Woah! I’m extremely impressed! The sound design is great, the visuals are great, and the puzzles are challenging. I’m amazed you put this together yourself. I had some problems with the resolution though. Maybe you could add in another setting between the two you have now?

I was only able to play through the first level because of time and the resolution issue I mentioned, but I really like it. Wait until you get some more feedback then I would definitely recommend selling it for a few dollars. I would 100% pay for this if I was looking for a fun little game to play for an hour or two.

Also, I like the use of Martinsh’s lens flare, but you might have to check with him to see if it’s okay. It adds a nice touch to the game. I’ll try to get through more of the game later.

See if you can add another screen resolution and I’ll try to play through the rest of the game and give more in depth feedback. Right now the small setting is way too small, and the large setting gets cut off on my laptop. If the “apply” button in the settings is changed to the left side, that might also fix the problem.

Thank you for the feedback, i dont think sell it, i make that for fun.

Yes i can add resolution, what is your resolution?

Otherwise i have think to make multiplayer game with this idea but i dont think alone i can make that.

Feedback: Changing the resolution is weird. It doesn’t actually make the screen res smaller, it shrinks the window to the top left corner. Also I cycled all the way to the right of the resolution thing and I wasn’t able to do anything after that. I had to force quit. Also the intro was very laggy.

For the intro i know, it’s little slow, but i think it’s due to the size of file video, i’ve dont fine any way to have good quality video with the script.

if you can suggest me an script video texture better.

Otherwise for the resolution, i dont see the problem i have follow your tutorial for game menu, it’s the same, can you tell me why the windows apear you on corner top left, because i dont see that me.

For the resolution 1366 x 768, she’s in script, but i dont know why, when we turn resolution we can’t click on button to continue, the click is detect but not on button.

I think it’s due to resolution ratio pixel, to turn we need click just on bot of the button left or right.

Otherwise i resolve an little problem, i think you have see, when we change lever the windows of the game apear and hiding after, so i try fix that, but i’m not expert in python^^.

Thank you for answer

(File is the same link download, but i’ve change it)

i have an question, one guys know how to custom samples AA for game settings?
i would like add this option on menu

Otherwise you know the good lighting is due to lens effect, i can make some tuto if people want, for material render or game mechanic, like for the Level12.

you can use that lensflare:

Otherwise i’ve not change too many parameters

into this file you can change on Flare text:

It’s only what i’ve change, to customize the force of lensflare you can just change value (dust*0.4+0.1), by what you prefert, the 0.1 is for the effect flare.

I was so excited to play! Your pictures look amazing!

I have the same problem. Changing the resolution is weird. It doesn’t actually make the screen res smaller, it shrinks the window to the top left corner.

This is a bug in blender, or how blender intended to have it. the resolution change will work as it should in windowed mode, in fullscreen it draws the window at top left and all co-oords are off. nothing we can do about it.

For the problem resolution, i’ve resolve the problem so normaly it’s not possible have an bug with that because the game use scale of screen.

Try if it’s work for that part and tell me.

Otherwise for the laggy menu i dont know, because the menu are an single scene and he have juste plane 2D, so he is very little size.

can you explain me more about the laggy, how it is?
It’s sometimes laggy of everytime.

For the configuration, i not lagg with:

i did not test your game, i know this is a bug or something within blender.
i got my own settings menu, and i got the same thing/problem with he resolution.

That’s why i felt like i needed to reply to it.
(i did not post anything before, your answer is meant for someone else)

#edit
Now i tried your game, it does not work and crashes after the kengi studios intro.
it get stuck at blackscreen, and crashes.

#edit2
on a side note, the installer, i selected english but the license was in french? (i thought)

Otherwise for the blackscreen i dont know, it’s not normal, any people have test have any problem with that.

I dont know how to resolve that, because i dont see the problem, i not find other way to the corrupted game during install.

Normaly after the intro video display the game change scene to an other file and load it, but i dont know because before you have arrive to launch the game, because i see the menu on your screen.

Otherwise for the framerate all scene and game are normal the game turn at 50 to 60FPS, so if the game lagg im sorry but i dont think i can make anything for that, it’s not an problem of blender and this game is very light.

Otherwise yes the licence is in french because im french, the language choice is just for install to translate for user the UI.

if it isn’t to much of work, i suggest you do that, this is/was a common resolution a few years ago.

Normaly after the intro video display the game change scene to an other file and load it, but i dont know because before you have arrive to launch the game, because i see the menu on your screen.

Uhm sorry but you are mixing ME with ANOTHER person #16 and 18 are mine, so i did not post a screen.

the problem here seems to me that it wont load in the new blend. #edit: or the missing resolution#

Otherwise for the framerate all scene and game are normal the game turn at 50 to 60FPS, so if the game lagg im sorry but i dont think i can make anything for that, it’s not an problem of blender and this game is very light.

same as above this is meant for another person, not for me.

Otherwise yes the licence is in french because im french, the language choice is just for install to translate for user the UI.

yes ok, but i and millions of people can not read the license, so to what do i agree? i suggest you make the license into english, so that everyone can read it.