So, I have a question… I’m currently working on building and animating a dragon… it’s a class project. I have the model and a decent rig.

However, when I was finished with the rig, I decided to add a Spline IK curve rig for the tail. It took me a while, but I finally figured out how to work it.

I added a curve along the original Armature (Dragon_rig, for clarification). I then added a Second Armature (tail_rig) to set up the spline handles. I used hooks to connect the curve to the armature, and it was working well.

Finally, over in the original Armature (Dragon_rig), I set up the Spline IK for the tail. I could then control the tail with the other rig (tail_rig).

The rig worked really well. I was very happy with it. I assume this far I set it up correctly.

However, I then tried to set up a small animation. The dragon is flying over a lake. To do this, I parented (Dragon_rig) to an empty, and set the empty to follow a curve for the movement. I then animated the dragon as if it is flying.

But when I set this up, the tail is one frame behind. It’s almost as with all the parenting and connecting, it takes one frame to calculate the position.

Disregarding the obvious Cloth deformation in the wing, this is an screenshot of the problem. 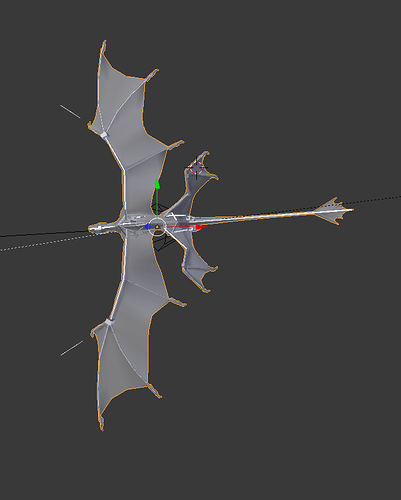 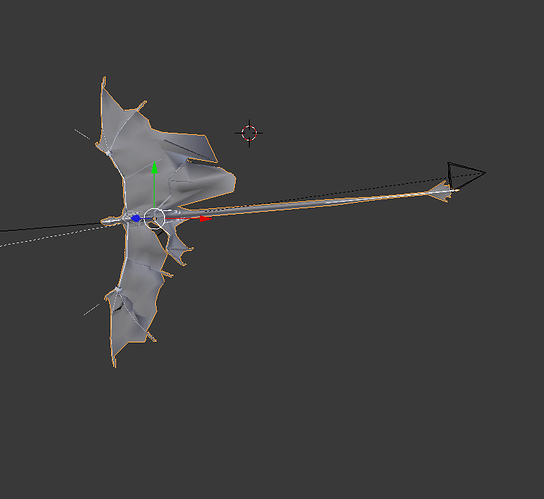 Any thoughts? This is obviously an issue for any practical use of the Spline IK rig. Let me know!!

Would really have to see the file to figure it out. Are the tail rig & it’s curve parented to the dragon rig? And well, the obvious question would be does it do this if you just animate the dragon rig without the empty & curve? That’s where I would start to trouble shoot it.

Normally, I’d do it a bit differently as far as the spline ik goes. I’d make the deforming bones a separate rig, and the bones you made into the tail rig, I’d leave them as part of the dragon rig. That way, all of your controls are one armature. But in the end, either way, it shouldn’t be causing the problems you describe.

Hey Randy, thanks for replying. I guess I don’t really care too much if people have my model, so:

[edit] The Blenderartists blend upload thing doesn’t seem to be working… so here’s the model on the first file sharing site that I found. Sorry! [/edit]

It’s fine when I take the influence of the Spline IK modifier down… It goes back to being a normal tail, no problem.

Also, the tail Curve, since it is being modified by the tail_rig, is not parented to anything. Correct me if I’m wrong, but that would be like parenting a mesh to a rig, as well as having it deform, correct? You wouldn’t… or shouldn’t, need to do that.

Actually, I just tried parenting the curve to the rig… I didn’t want to say that and then be completely wrong, haha. But it didn’t work… the same problem persists… the tail is one frame behind the rest of the rig.

Thanks for helping me!!!

btw, I guess I don’t need to say it, but just in case someone sees this thread and wants to go for it, that model and rig are property of me and all that. If you want to do something with it, ask me. I’m almost embarrassed that I’m saying that, but, well, I guess I don’t trust people.

I’ve put a lot of work into it. Sorry.

Also, the tail Curve, since it is being modified by the tail_rig, is not parented to anything. Correct me if I’m wrong, but that would be like parenting a mesh to a rig, as well as having it deform, correct? You wouldn’t… or shouldn’t, need to do that.

Actually, I just tried parenting the curve to the rig… I didn’t want to say that and then be completely wrong, haha. But it didn’t work… the same problem persists… the tail is one frame behind the rest of the rig.

This is exactly the problem, the curve isn’t parented to the armature. I didn’t upload it because of it’s size (42 mb, which is why you can’t upload here, 10 mb limit I think). I’ve fixed most of it up, but there’s still a glitch in it… I’ll have to dig a bit deeper into it, just noticed there’s a cyclic dependency problem in there. Start blender from a console window (or toggle the system console from the help menu on a windows machine) and load in the file, look in the console window for the error message. I’ll take a closer look sunday afternoon/evening… Short on spare time at the moment…

Looked this over and really I don’t know what to tell you other than it’s a bit of a mess. I think you should forget the whole spline IK thing and stick with what you had before you added that. You’ve got actions on the armature and on the bones in the tail, you’ve got nla strips, you’ve got what looks like close to a finished project and by adding the spline IK you’re not really adding anything other than a major headache and a lot of work. Could it be fixed? Yes. Is it worth fixing? I doubt it.

You have 8 tail bones, by adding the spline ik, (and fixing everything that needs fixing) you’d only have 5 bones to animate, and you’d have to throw away all the previous animation you’ve already created with the 8 bones only to re-animate 5 bones. Is all the extra work worth it? I doubt it…

I’m not sure what you are looking to gain by going with the spline ik, but having done so much work already on this, now is hardly the time to switch directions, IMO…

haha, it is a bit of a mess. I forgot to let you know that I hadn’t named all the bones yet. Sorry!

As for the file, this is nothing more than an rig test… to see if the rig works. I’m not planning on working on the animation any more… I’m not using the animation for anything. I just wanted to see how well the rig worked. It’s a learning project… at this point, I don’t have anything planned for the dragon.

But because of the learning nature of the project, I just though it would be cool to set up an ik spline… just so that I know how to use it when I’m working on a more serious project.

Thanks for your thoughts, though! You have a really good point… as far as the finished product goes, you’re 100% right.

I guess it would help to figure out an Action vs NLA editor workflow. I haven’t spent much time in animation, so I’m still trying to learn the best way to work. If you have any thoughts, I would be glad to hear them!