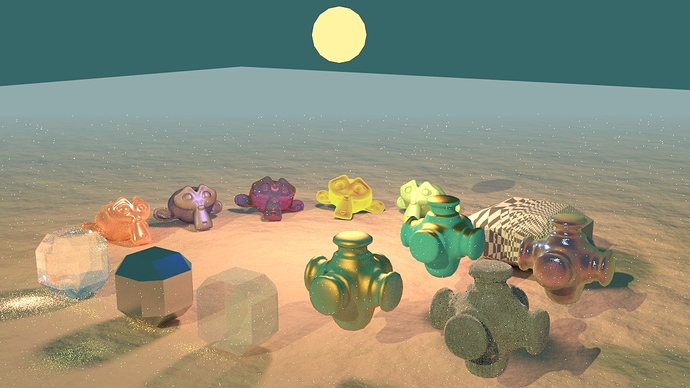 NOTE: The latest version gives a couple of groups use of the new ‘ray depth’ feature, so you need a build from this month for everything to function properly.

WHY THIS COLLECTION OF GROUP NODES

-The idea is to provide a collection of standalone effects and materials through group nodes to allow people to quickly create common materials like glossies and glass without having to put together an entire node tree for every object. This would also tend to help those new to the Cycles engine due to premade nature of the materials where he only has to place one or more in the tree (perhaps mixing them together as well), and tweak a few settings to get the desired effect during rendering. The other part of the idea is to make the materials fairly generic so they could be used as or part of many different materials, something similar to what you see in the material systems of engines like Luxrender.

This was originally and still is mainly for my personal use, but my list of ideas may assume many different cases that would require a wide assortment of materials and thus more group nodes would be needed to cover them.

One of them is known under the name ‘Light’, while we do have an emission node, the rationale for creating it is simple

Taking in part what Micheal W did to make a light invisible, it was clear that the possibilities of light control was more than just that and I wanted to create a node group to give maximum control over light objects and light materials. This node also greatly reduces the aliasing seen on edges that border a light material or intersect with areas of the image where a light object is by allowing you to ensure that the the maximum RGB value of the light material is less than one (sharply reducing the contrast between pixels which the multi-sampler would otherwise have trouble anti-aliasing)

Options for the light node:

Hope you find it useful, it has helped me with my scenes.

Edit: Thanks a lot, Ace Dragon.

The thread has been changed to one where I share all of the node groups I have created so far. As of now the .blend has been re-uploaded with two new node groups

GLASS:
-Does a wide range of transparent materials including glass.

SUPER GLOSSY 2:
-May still be a work in progress, works similar to Brecht’s Fresnal Blend node but with more control, more options, and is able to create anything from a perfectly matte surface to a perfect mirror, this group node also has an advantage in that, according to my tests, seems quite a bit less susceptible to a random coloring bug that appears when you assign a colormap to a material that uses a mix between a glossy and a diffuse material.

Append the object ‘Groups’ into your scene

??? I simply don’t understand. Is it only me? The “group” add (and not append) does not work.
These expressions, is this a kind of advanced user’s language? I don’t get it.
Please try to be more helpful and precise. Not so fast. Some screen captures?
IOR, where is it?

This is great, thanks for sharing it AD.

Michalis, you append datablocks from other blends as usual… in the latest version of cycles when you append and select the blend file you see the contents in a folder structure… you want “node groups”.

In Ace’s blend there are the three he mentions…

Now that you’ve appended them you can use them from the “add” popup from the “groups” section (or if you have an existing closure node selected you can change it to another closure or one of these group closures by changing the “surface” pulldown in the material properties area.

Ace, it’s spelled “fresnel” not "fresnal!!! the first time I thought it was a typo, but you’ve made this mistake so many times in this thread (and in group closure inputs in your node groups!) I had to say something!

NEW NODE; SUPER FRESNEL:
-From my testing, I really didn’t like how the built in fresnel node behaved in many cases, wasn’t actually slope-based, had no real falloff, and only gave me problems (like a circle in front of the camera), so using the geometry node, a couple of vector math nodes, and some math nodes I made my own method which I found much more pleasing, the inputs are.

While the same options are in the other group nodes, this allows for my improved fresnel effect to be used with any possible setup, I hope it helps all of you who need such an effect.

Update 3 is up with two new group nodes that would be useful for various effects.

Allows the creation of a surface material that mimics a halo (mainly usable on spheres), somewhat based on what Micheal W has also discovered with a couple of added controls.

Utilizes a blend texture to adjust an object’s visibility based on the distance to the camera, could be used for mist effects in some cases when applied to every material in the scene mixed with a transparent material.

Also fixed a glitch in the new distance blend node, switching the math node that does the contrast from power to multiply did the trick.

EDIT: I just figured that the super fresnal group node can perform the exact same effect as the new halo group node with a little more node work, oh well, for those who need a ‘quicker’ way to make a halo.

Small update this time, but with a couple of improvements based of what I’ve been needing for scenes I’ve been working on with Cycles.

Thought this would be the appropriate place to post this - I’m trying to create a radial brushed metal effect in cycles. I’m certain it must be possible somehow - but I cant really figure it out. Can any cycles nodes experts help ?

examples of what i mean here

this is actually for a live project I’m working on at the moment, so you’d be doing me a massive favour

Have managed to produce all the other simpler materials i need, but this one element has me a bit stumped at the moment.

Actually - I think i might have nearly cracked it - see below for the node setup if anyone is interested. Its not perfect as the reflection should vary depending on the viewing angle i think, so if anyone can help with that, that would be cool, but for now this is a good start 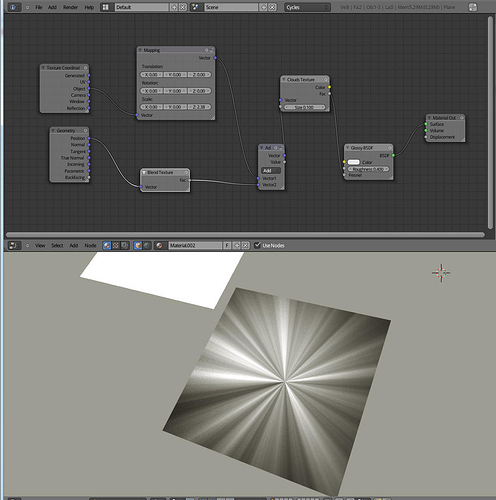 To get viewing angle dependent effects you would need to plug the camera coordinates from the texture coordinates node in somewhere (perhaps through one or more vector math nodes), this will make things change depending on where the camera’s pointing.

I am not very good with procedurals, so I tend to cheat with stuff like that, and for the control knobs on an amp I rendered a few weeks back, I simply created a radial bump map. Then let cycles do its thing. Looked terrific. I will see if I can find the map.

Heres a high res png, but there easy to create.

Its really a 7z file. Change the suffix, and un zip.
Use it as you wish.

Wow, thanks, thats really cool! I had got to almost the correct solution I think with nodes, but I think your texturemap will look a lot better, I’ll give it a try