Made this terrible model just to test importing obj files from Sculptris, but ended up accidentally stumbling upon the following eye shader/texture made entirely procedurally from cycles nodes: 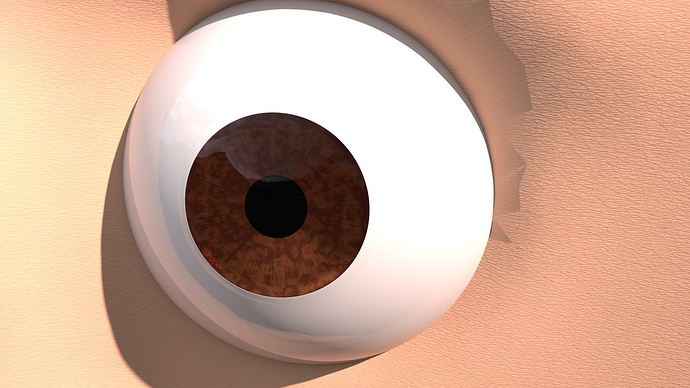 Any comments or ways to make it look better? (ignoring the mesh and texture around the eye would be a start! ;))

can I see the node setup?

Whoops! Totally forgot about the node setup! Obviously you’ll need to see that too! Here are the nodes for the iris:

The other parts of the eye are generally the same as any other eye. I just tried to get a procedural iris since I didn’t have an image for one, nor felt the effort necessary to get one and UV map the eye since this was actually just to show my wife the basics of sculpting. I just added eyes so that the weird sculpted face didn’t have big gaping holes for eyes. I added a quick wave texture mapped to normals (it’s still in there) for the lines in the iris, but came to my senses several minutes later with this node setup. Guess I kinda got carried away, but then I realised how useful this could be for anyone making a quick character to quickly do the eyes! Therefore I think it best to keep it simple, while trying to capture that certain something that makes eyes believable.

What’s also handy about this setup is that the 3 hue nodes can be used to change the eye colour.

You know, this is actually pretty amazing! I will have to check it out!