Hey there, Titans Prince here with another question… I am working on a model which I will use high quality rendered stills (4k resolution at 16xAA), of for an application to an art school for game design and I can’t decide whether to use blender internal or cycles. Cycles is easier to get a more realistic look with lighting but figuring out compositing/materials/uv texturing is more difficult and far less tutorials exist covering it. I know that andrew price has some good ones for sure but there is a lot more material on blender internal since it’s older.

Right now the plan is to take my high poly sculpts and do some retopology using new meshes based off the snap to face feature like they do in the cgcookie low poly game assets tutorial series and then uv map those and bake the normals and also use the uvs for texturing. In blender internal this means I can use a material from the repository or one I have made for normal mapping to make the cloth look more realistic.

In cycles I don’t have to spend a long time trying to find the ideal lighting setup and watching a host of tutorials specifically on lamp placement/intensity and fidgeting with the setup. I can’t decide which to use so I figured I would ask this now before I get halfway into one method and change my mind.

Which one will provide the ideal for what I am hoping to achieve? I want the model to be as realistic as I can achieve. This is what I have so far 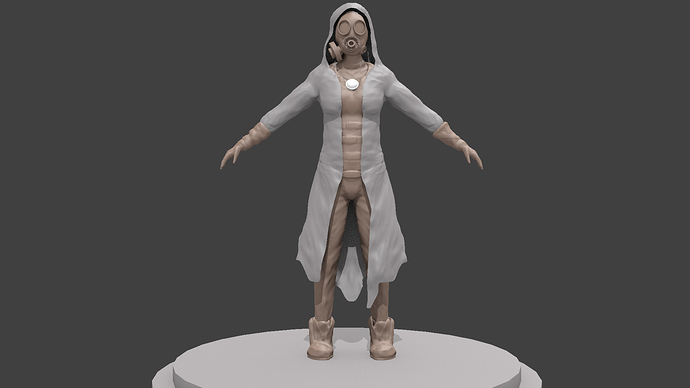 Do your painting and texturing in Blender Internal Render, and then save those maps to plug into shaders in Cycles if you have time.

Im a big cycles fanboy, but the truth is that (as cliche as it is) it’s just a tool. Use which ever you like, neither is “better”.
However I will say that BI is old and there are only a few decent render engines left that are like it. If you want to improve yourself and be more attractive to schools and studios, learn the new tools. There are a lot of people around that are good with the old tools, but not so many that know the new stuff. This means less tutorials yes, but that encourages you to learn stuff by yourself and not rely on other people - this is the best way to learn - and also that there are fewer people like you who could potentially take your place.

Like I said, use internal to get your maps - then plug them into shaders for use in cycles. No baking for normal/AO/displacement/etc exists for cycles yet, so best bet is to do your baking and painting internal at first until you have all your elements, then save all your images and use these with cycles shaders and cycles lighting to get the best of both worlds. Merely using cycles shader box mapping won’t score points for judges of game assets, but if you show them you can use your UV space wisely and get content that looks great incorporating your texture work into a modern shader system, you should get their attention.

Doing it all in BI first and then moving it to cycles when it’s mostly done sounds really good. To be clear, the portfolio is just images of whatever I want that I have created and which is my original content so I’m most definitely NOT going to include any wireframe renders since I’m an amateur.

My topology is not bad, mind you, but it does get a little dicey in some places as far as poly distribution goes lol so I am considering lovingly retopologizing the entire thing one row of squares at a time while I watch RvB on my tv so I don’t suddenly perish of boredom. This will make sure uv mapping and texturing will pretty much be a breeze and allow me to directly control topology in a way that should avoid unpleasantness provided I make the proper effort.

Thanks for your input Craig Jones I never would have thought of using both of them together.

And while cycles is useful I have to respectfully disagree gregzaal because from where I sit it has very little application to either game design or 3d movies because the rendering quality does not justify the speed gains at a professional level IMHO and it doesn’t support half of the functions necessary to make what I would hope to be a working game model in my experience because it’s still very new and in the end it doesn’t even show you an accurate representation of what the lighting will look like on your character thus giving you an inaccurate representation.

I do wholeheartedly agree that learning new techniques is a necessity but the video game industry standards are 3ds max and zbrush and tbh I only use blender because I’m poor and it’s an awesome program for what you are paying and for what it can do. It’s literally the best 3d program on the market for under $2000 in my opinion ^.^