I decided to share some progress of my latest project. I decided to model my guitar, Cort X11. I started it few days ago.

I think modelling of the body is pretty much done, except for some fixes (like the edgeflow on the curve where forearm rests). Topology isn’t perfect, but well, I’m trying to learn something and I’m currently working on making it better :o

Next I’ll probably do the neck.

Can’t wait to hear your comments and suggestions 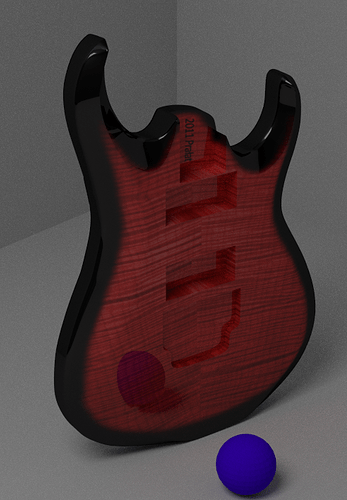 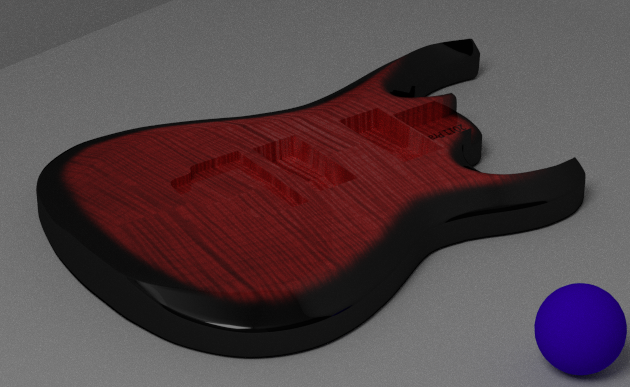 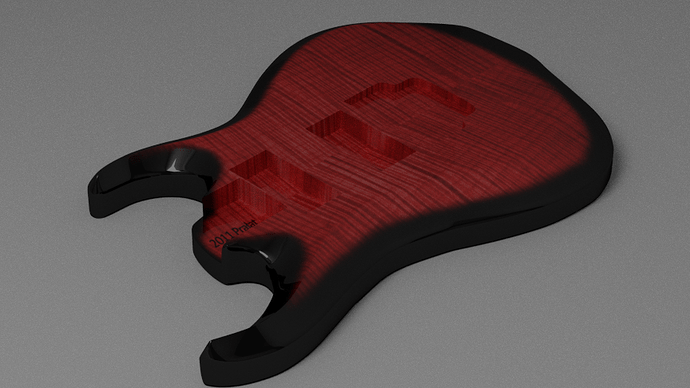 BTW. I haven’t played with the Blender Internal much, but I discovered i really like it’s Ambient Occlusion :yes:

EDIT: Added a new wireframe render with improved topology. Still not perfect, though, but I may leave it as it is 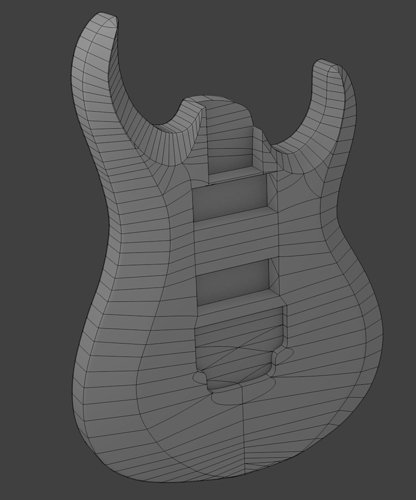 So here’s today’s progress. Not much, since I have to start studying for my exam :spin:
I mostly worked on adding the curve on the back and improving the edgeflow in certain areas. I also modelled minor stuff: knobs, straplocks, rubber padding under the bridge and bridge posts (not shown). Plus, I created a new texture and played a bit with the colours, which gave me some really amazing results :eyebrowlift2:

I have a bit of a hard time figuring out what focal length to use, so the results may differ a bit from one to another (as you can see, my first renders seemed a bit “fatter” than the last one), but I’m getting close. 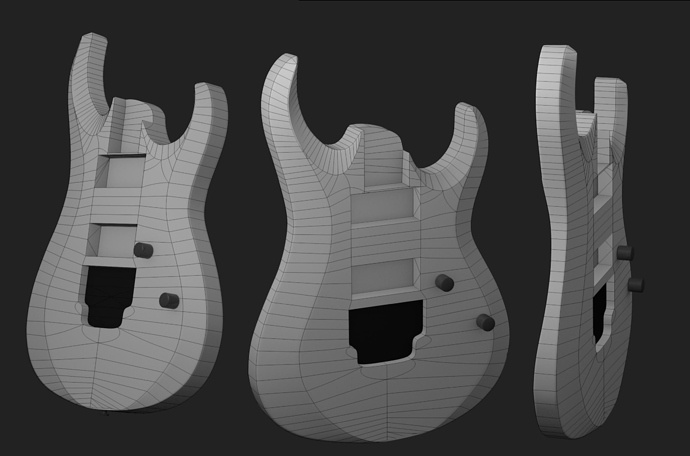 So, today I modelled one of the pickups, SD SH8 Invader. Second one will be SH2 probably, but I guess no one cares 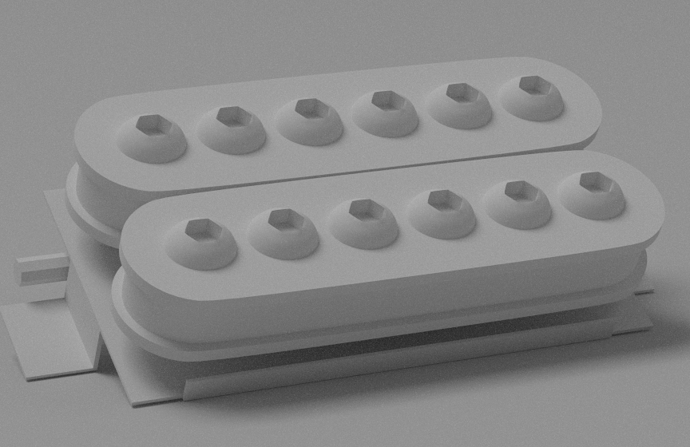 I won’t create any materials before i finish the second one and create pickup frames and all the little details like the piece of cloth around the middle part of the pup.

BTW. Do you know that feeling when you are absolutely certain that you should go away from the computer and start doing something more important? Me too. Damn you, Blender

A little playword, my old buddy used to call his guitar like that. So I decided to give my project that name, assuming that no one on this board would understand. Turns out I was wrong

S470? Good machine :yes:
Actually my guitar is pretty much stock (except for some minor mods in electronics, like treble bleed and custom made active preamp), but I wanted this model to be kinda unique. So I threw in Seymours.

I might as well stick with a different burst colour, but changing that takes about 30 seconds, so I have a lot of room for experiments. I could also make a custom logo… Whoa, gotta stick to the modelling first

So, Ladies and Gentlemen of Blender, I’ve got an update.
Pickups, pickup rings, and it’s pretty much everything I’ve done so far. 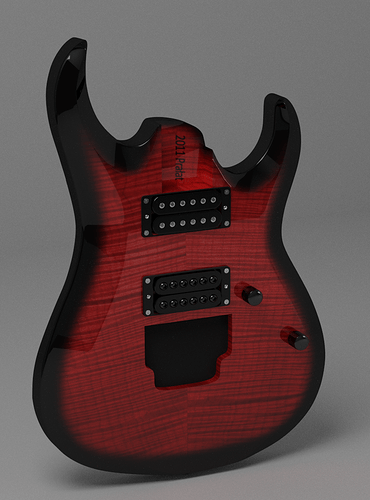 This week’s quest - bridge. Neck is waiting until Friday, when I’ll finally go home for Christmas and get a chance of taking some measurements and reference pictures :o

EDIT: I decided that the body texture was too bland. This is what I came up with after a minute or two of experiments: 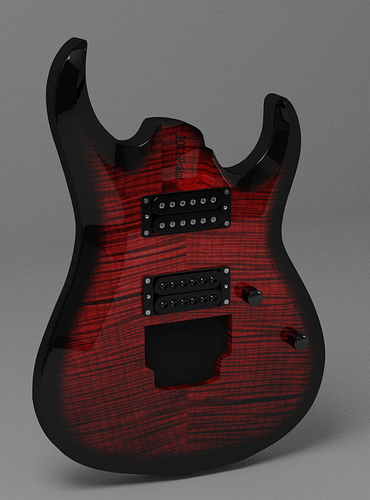 Aaah, much better! (Maybe it has too much black, but the final texture will be made after I will have finished the modelling process)

Looking REALLY good so far, keep it up.

In the previous post I declared bridge as a goal for that week. Well… It turned out to be a task for one Sunday

I used Floyd Rose original manual schematics as a reference, only changed the string clamp screws to Schaller type ones.
So here it is: 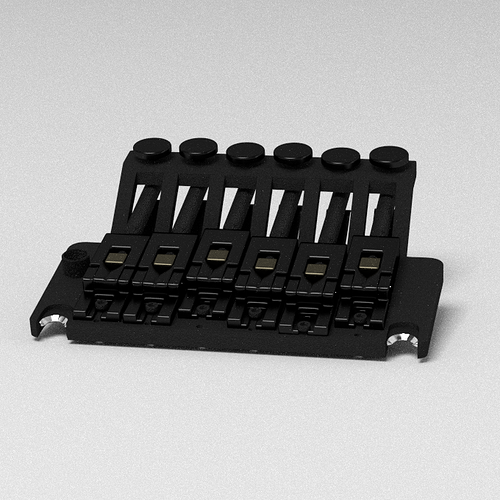 And our typical showoff shot: 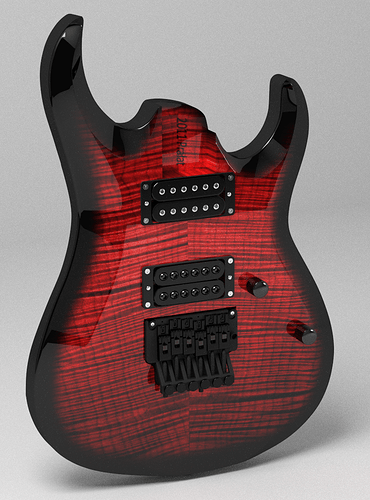 As you can see, the body is almost ready. I’m not entirely sure if bridge materials satisfy me, but we’ll see.

I must admit that as for now I’m pretty scared by the number of vertices and size of the file itself. I already have approximately 600k vertices and about 520k faces O_o
Guess it’s not so much after all, but I estimated it to be far more simple. Well, we always learn, don’t we?

We certainly do. Are you going to make a stand for it?

Don’t know yet, but probably not. I’m going to use that model in a more complex scene, where the stand won’t be necessary.

So here is what I have now: 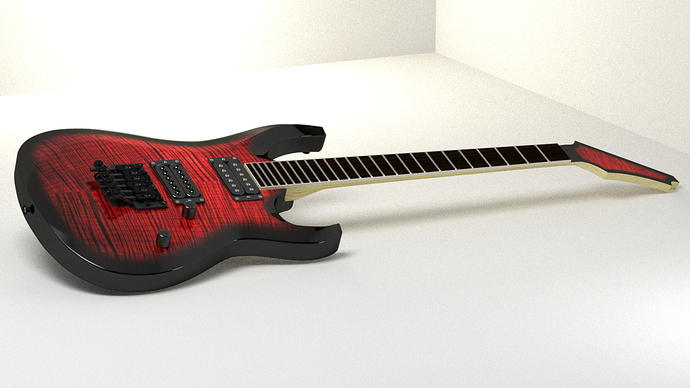 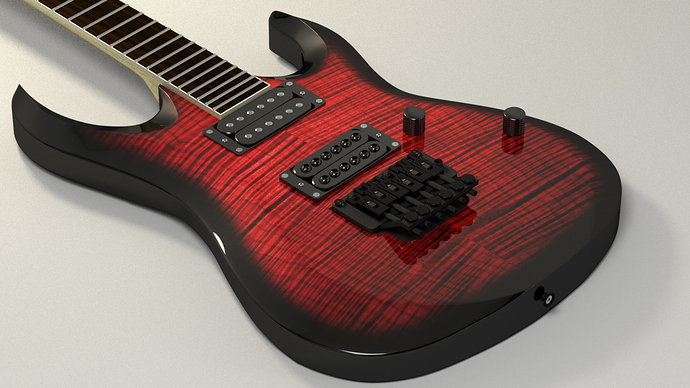 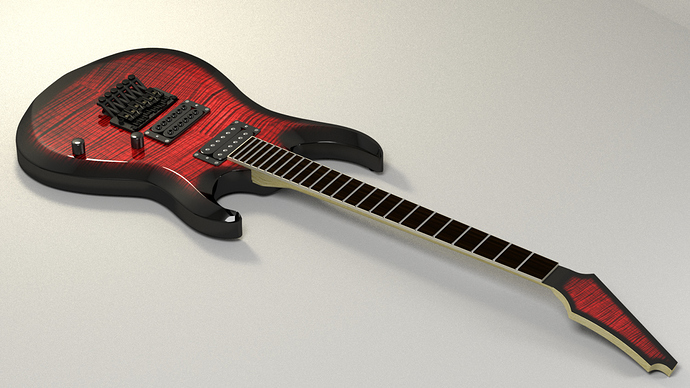 Now, on to the integrals…

Dude that’s awesome! my only crit is the texture on the base of the guitar, you can see the seam

I think the ‘seam’ is intentional. Probably ‘match-book’ seam. Is this right krokody? Looks phenom btw!!!

Well, actually, I’ve been asking this question myself a lot :o

I think of recreating the real string’s structure (to a certain degree, of course, not everything is visible). Cylinder cut in half and wrapped around virtual core. I’m not sure about the proper method for that, though. I experimented a bit with a curve and array modifiers, but for now I didn’t manage to come up with a satisfying result. We’ll see.

edit: Well, I did manage to get satisfying result… 200k polygons per string :spin: I’m going to leave it for now and depending on the final scene I will decide if it needs to be reduced. Well, in fact, I’m still going to use my brother’s desktop with Nvidia GPU on board for rendering (if he allows me to do so, of course

), so rendering time shouldn’t be dramatic.

For the string to be of the proper length, the repetition number in the array modifier settings has to be set at about 2300…

edit2: Now i realised that all that struggle was completely unnecessary… Using reasonable resolution (let’s say, 1920x1080) and filling the whole image with the model itself (take a look at my last update) these things are barely visible. And in the final scene the guitar will be smaller, so lack of the geometry on the lower strings is not going to be a problem at all. If I was going to make any closeups, I’d have to use more detailed parts, but for now - I don’t think so, especially that the headstock and body textures are not really detailed enough to be used in extreme closeups. So the problem is solved for now - regular cylinder strings, with a different material, to distinguish the plain steel ones from the lower ones, which are nickelplated.

As you can see, I’m too tired to write anything sensible

Have to get some sleep… Exams are exhausting for sure…

Really exceptional. Love it so far, and can’t wait to see more.

Also, it’s really brave of you to model polygon strings. When I’ve seen that attempted in the past, the result was less than favorable. I really hope it works out for you! If it doesn’t work, you might try uv mapping a cylinder with a very simple repeating texture.

Thanks for suggestion. Actually I abandoned the idea of polygon string for now (but it is still included in the .blend, tho) and I’m pretty sure that even texturing the lower strings won’t be necessary. But it all depends on how the final scene will look like and how big the guitar will be in the final image. For now I have normal cylinders with a less shiny and a bit different coloured material to imitate nickel.

But the project itself is not receiving any love at all for now… I have some models I didn’t show you, mostly tiny objects that’ll appear in the scene, but I’ve made no progress since my last post. Oh well…

As for Cort - they make pretty decent not-so-expensive guitars, and I’m pretty sure that they make most (if not everything) of the hardware for Ibanez and some other manufacturers. For the cheaper models, of course.

I decided to give myself a break and play a little with Blender and stuff :o
So I rendered the whole thing to give you an idea of how it looks right now:

I’m not sure yet, but I’m quite satisfied with the outcome and I may call the guitar model finished and move on to the interior modelling.
And that’s everything I have to share today