Hey peoples, I have been working on a character. I created her before but i was not really happy with how she turned out then… So I am re creating her. Starting with the face. Rendered in cycles. 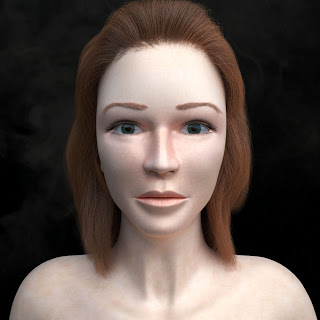 Please give me feedback on how I can improve her.

For faces I turn my field of view to around 60 when I model. The higher it is the more orthographic the camera becomes.

Bottom lip tucks under upper lip and corners of the lips go back in the face( grab with soft selection and a really pointy falloff). Remember mouth wraps around your teeth which are basically a cylinder of sorts.

Same thing with outer corner of the eye upper lid always if slightly overlaps lower lid in its mass.

and carefull with the eyeliner it looks to rough. You can actually add some eye shadow above the eyes

it doesn’t need to be strong could be subtle as well.

Eyelashes use children with clump they will look better and more organic you can even put two particle systems with different settings to get more variation.

Other than that Id play with the cheeks.

I agree fully with Astapov’s advice, and I would like to add that you might want to compare Dana’s eye-size with some photographic reference, for they look way to big (unless you’re going stylized). The same could be said for the lips, but since the introduction of botox(and Angelina Jolie) in human society that no longer appears to be true XD.

And indeed the face looks a bit flat, working on your mesh in perspective mode and looking at the face from different angles will probably do the model a lot of good.
So far the model shows great potential ! Keep up the good work.

One more thing about ref. To match the focal length of your ref look at the ears and the sides of the face in relation to eyes and the mask of the face. The ref above was taken with a different camera you’re using somewhere 60-80 maybe 55 at the very least.

Its not necessary to go strictly by reff when working on a portrait but to get the information you want out of it camera is important.

Keep going dude we want to see this piece progress :).

Thanks for the nice comments guys. I will post an update soon

Here is an update. Dont mind the hair… Its pretty terrible I know… 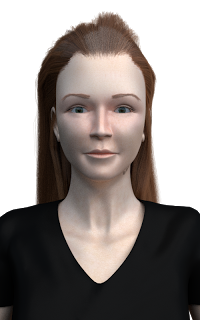 She looks allot younger all of a sudden. Im going to try to fix this but please let me know if you have some tips. (She is meant to be 25)

She looks younger because the ref above is younger :). But now you have a good base to make adjustments from. What I would look at is the eyelashes on the outer part of the eyes, they should follow the contour of the eye the line youre creating should be done with make up.

Just aesthetically i would make her lower lip fuller than her upper lip how you do that is up to you. You can lower to top lip or you can lower the lower lip .

I would also lower the top eyelids or maybe the whole eyesocket. This should give her a more neutral expression. Remember, your reff is smiling. Maybe lower the eyebrows a bit too.

If you want to make her look older sharpen the creases under the eyes and next to the nose. and make the cheeks a little less puffy maybe. Basically you want to hint at the bony forms just a tiny bit.

The neck muscles could be smoothed out a bit even for 25 they are too strong. and their angle should be a bit wider they attach behind the jaw.

Also just as a side note google some makeup for the eyes and such. No female model is complete with out a litte makeup eye liner a little eyeshadow. It can be subtle makeup but i think a little eyeshadow would help.

Another thing, for the eyebrows go with lower particle count and raise the length of the hairs. You may have to manually plant the hairs in some places to get the shape you want. And then comb them into shape(this will be a pain.) You will get more realistic eyebrows this way. You can use one or two children for those hairs with a little clump.

Have you considered giving her glasses? I think it would suit her. Something with a square black frame. 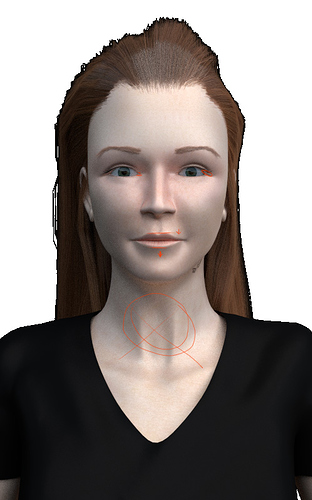 I forgot to mention if that black line on the upper lid is the emitter for the lashes make it unrenderable, you’re better off texturing that in.

the thing that i noticed is that the bottom eyelids dont extend out much, which helps to stress the shape of the eyeball and how the eyelids function. also, the roundest part of the cheeck may be too close to the center of the eye; this being said its hard to tell from the picture.

Ok so I worked allot on her… 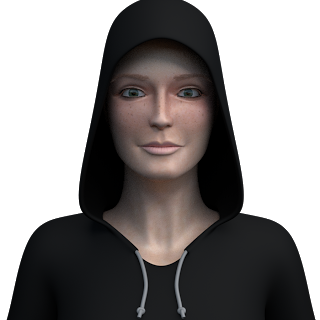 Thanks for the comments guys. Ye i would love to give her glasses. She is a character from my wife’s book though and in the book she doesnt have glasses. She is also very poor so I want to keep the amount of makeup to a minimum (I did add a little though).

Something is still wrong with the eyes though… Please help with this… Also the hair… Blender cookie is apparently putting up a tutorial soon about hair… Which I will hopefully get some pointers from. If any of you have any suggestions then please let me know as well.

I still need to redo the eyebrows and work on the neck a little. Also what do you think of the hoody? I know it will make hair more difficult

Please keep the critique coming. I really value it! 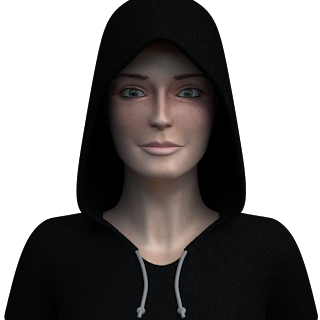 Another update… I fixed her eyes a little and did some work on the hoodie… I added fur and a texture to it… Does it work? needs to change? (I know i need to unwrap it better)

It’s coming along. you might want to smooth that lower eyelid extension towards the middle of the face. the main thing now is to fix the scm muscles on the neck…as a previous poster pointed out, those should be out further on the side/front of the neck because they hook to the back of the jaw not under the chin.

I thought I posted a reply…

When working on structural changes it may be worth your while to go into photoshop and liquify. Its a lot easier than modeling. That way you can try different things on the fly. Then make those changes in your model once you find what you like.

Play with the eyes a bit, she still looks kind of excited. Unless you’re going for that look.

And vary the spec a bit. more on lips around eyes nose etc and less elsewhere.

For hair use a separate mesh to emit from, its a lot easier that way. And you can also layer hair systems. Both help control the styling.

Keep going man its getting better.

the photo above is not a reference image that I am working from. As u can see it was not even me that posted it… The character is one from a book that my wife is writing. I do agree that she looks a little too happy right now and I will try to fix that… Also the liquify suggestion sounds really good! I never thought of that.